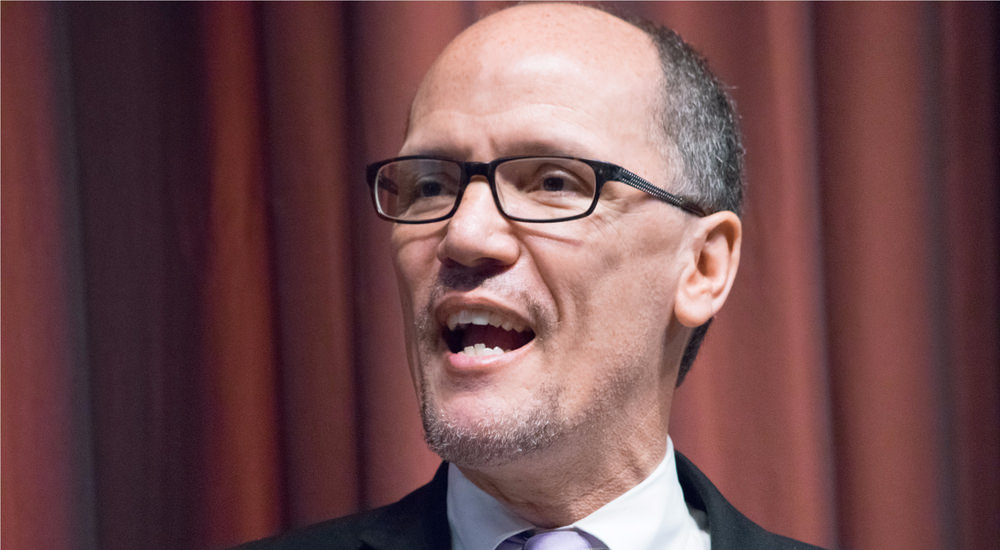 The Left really has a way with words. Whether they call anyone they disagree with “racist,” “sexist,” or the like, Hillary Clinton calling Donald Trump supporters deplorable, or Democrats saying any Republican proposal cutting spending is akin to throwing grandma off the cliff, last week’s speech by newly elected DNC Chair Tom Perez truly hit a new low, where he claimed at a rally that “Republicans don’t give a s**t about people.”

Perez spoke to a crowd at the “We Build the Resistance Rally” in Newark, New Jersey, where his rhetoric redefined the word “unhinged.” He parroted the constantly-claimed conspiracy theory of the Left that Trump didn’t actually win the election, but that the Russians stole the election from Clinton, as if Vladimir Putin somehow programmed our minds before we went to vote. Perez then called Republicans “heartless.”

Perez told the activists, “women marched all over the world and said: Donald Trump, you don’t stand for our values! That’s what they said. Donald Trump, you didn’t win this election!” Regarding the false theory of the Russian collusion and Trump’s illegitimacy, Perez answered, “I don’t care, because they don’t give a s**t about people.”

Keep in mind that this is in Newark, one of the poorest and most dangerous cities in the country, dominated by Democrats, but I digress.

And to top it off, on Sunday, when Dave Weigel of the Washington Post tweeted out a link noting that Perez wouldn’t apologize for his remarks about Republicans, Perez tweeted quite the response: “Sorry not sorry.”

How much more proof do we need that the Left doesn’t stand for anything other than power? They have no principles at all. They will do whatever they can and go to the lowest of lows to gain this power. They don’t care how crazy they look. They don’t care that just a mere few years ago, it was unpatriotic to criticize the president, and now their entire movement is actually named “The Resistance.”

Trump may have a habit of tweeting dumb things, but the tweeting pales in comparison to the Left’s frequent unhinged behavior, specifically that of Perez in this case. Many will argue that Hillary’s “deplorables” moment contributed heavily to her election loss, propelling Trump to the White House, and the Republicans keeping control of Congress. And as many problems as conservatives have with the Republican Party, we beg of the Left and the Democrats to keep up this behavior. In fact, ramp it up as much as you can.

We can’t wait to see where it gets you.