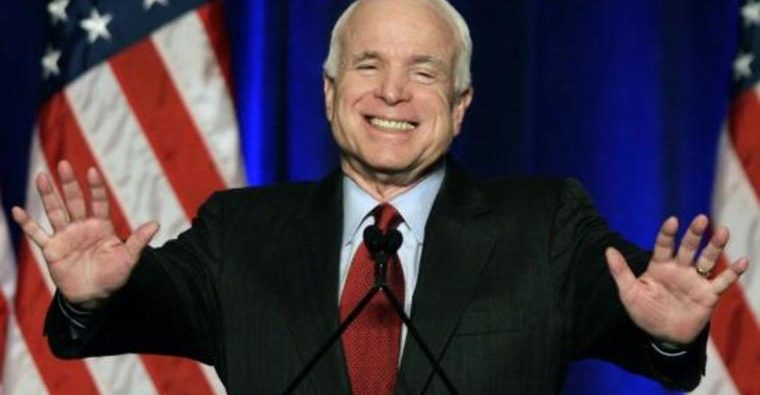 So with years of Senate positions behind him, and his greater years as a true force in politics, John McCain needs to retire and enjoy the later years. I salute you Senator McCain for your service to our Country, and you will always be a hero for what happened as a P.O.W, but a time comes in everyone’s life, they need to see the writing. Your ability to cause true change back to the constitution is long past, and you fit the mold of a center leaning Democrat more than one of a Conservative Republican.

Kelli Ward a more Conservative competitor with a fresh set of eyes, and a heart in the right place is giving John one “hell of” a battle. Kelli Ward is more heavily supported by Men 46/40 over McCain.  Conversely Women support McCain 43/36 over Ward.  The complete opposite narrative from what national punditry will opine (gaslight) when discussing gender-based voting.

PPP’s new Arizona poll finds that John McCain has a negative approval rating with Republican primary voters, and is at pretty serious risk of losing nomination for another term. Only 35% of GOP voters approve of the job McCain is doing to 50% who disapprove. He’s in particularly poor standing with conservative voters. Among ‘Somewhat conservative’ voters his approval spread is 33/52, and among ‘very Conservative’ voters it drops all the way down to 18/67.

McCain is polling at only 39% in the Republican primary field. He’s benefiting from having multiple opponents. Kelli Ward is at 26%, Alex Meluskey at 4%, Scott McBean at 3%, and Clair Van Steenwyk at 2%. 27% are undecided. McCain is very strong among moderates, leading Ward 60-10. But among ‘somewhat conservative’ voters he leads just 34-29, and with ‘very conservative’ ones he’s down 35-28. When you narrow the field down to just a choice between McCain and Ward, it’s a tie at 41%. Ward is polling this competitively at this point despite having only 41% name recognition.

Even if McCain does manage to survive the Republican primary, it’s not going to be a walk in the park for him in the general. His overall approval rating is 34/52, and he leads Ann Kirkpatrick only 42/36 in a head to head matchup. The race is close despite Kirkpatrick having only 58% name recognition at this point. If Ward advances to the general election it looks like this contest will basically be a toss-up- she gets 37% to 35% for Kirkpatrick so it’s pretty much a wash.

“John McCain’s going to have a hard time getting through the Republican primary,” said Dean Debnam, President of Public Policy Polling. “39% isn’t a good place to be. And even if he does survive Kelli Ward, the general election’s likely to be tough for him too.”

Public Policy Polling surveyed 896 registered voters from May 13th to 15th, including 443 Republican primary voters. The margin of error is +/-3.3% overall, and +/-4.7% for the Republicans. 80% of participants, selected from a list based sample, responded via the phone while 20% of respondents who did not have landlines conducted the survey over the internet through an opt-in internet panel.

The numbers are on the wall while being a strong leader and never giving up as a P.O.W., it is never recommended to be so stubborn that you disgrace yourself through self-idolization, to the point that you are not replaceable. At this point, Senator McCain needs to be replaced with a Conservative, and a more Constitutional Republican, which Kelli displays and represents.

It is truly time for John McCain to retire with dignity and grace.