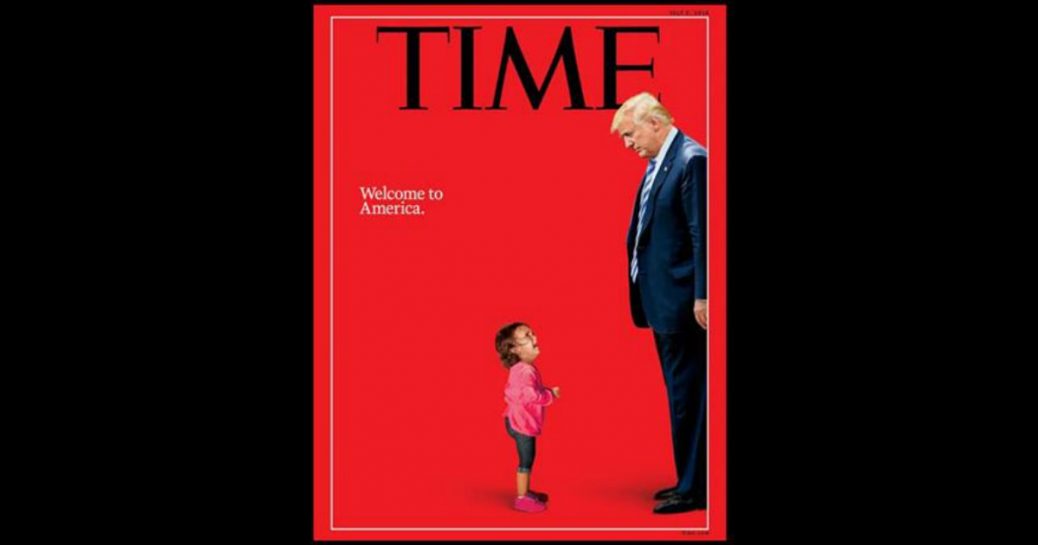 An outraged world is fuming over the new Time magazine cover photo showing President Donald Trump standing tall, looking superior over a tiny “refugee” girl at his feet, her head down and sobbing, who (the photo implies) had been torn away from her parents during Trump’s handling of the refugee crisis.
‘Yep, that’ll do it,’ the Democrat Communist Trump-haters boasted when the new phony Time issue came out. President Trump is a monster with no heart for anyone but himself—the democrats say. Dirty politics at its finest.
Those of us who made inquires learned that this little girl is NOT a refugee and she has parents. She was never separated from her parents!
This entire photo fraud was staged fake news to make President Donald Trump look bad which has become a full time occupation of the Communist Democrats who plan to take over America.
They go so far as to state that someone whose identity is known only to them, says that they think Trump is a mental case, and that gets published.  If the very elegant Melania, wears shoes or a jacket that prompts made-up criticism, that non-event gets full coverage.
ANYTHING to make the Trump Family look bad and unstable. This is an example of DIRTY POLITICS.
The parents of the children the left focuses on, have committed a crime of entering The United States illegally, and are arrested. They could have gone through the process to enter this country legally and gain legit citizenship.
Think about this: Arrests take place every day of those who break the law; criminals, thieves, murderers, rapists, drug and human trafficking, weapon charges. The children of the law-breakers never have been sent to jail with their parents who committed the crimes. They are placed in the home of relatives.
And nobody has ever questioned that. But now, the world is questioning the status of the children of the accused border-crashers since it has become a powerful political issue to give a particular side an advantage.
It is also interesting to note that the Dems are now so very sensitive to the children of the lawbreakers, and HOWL at the inhuman mistreatment of these young people. so they say. Yet they do not think twice about brutally butchering little innocent babies about to be born because they are inconvenient! Abortion has become the most visible issue for the Dem-Communists. This is nuts!
And the word butchering is accurate. A device is inserted into the womb that snips and pulls off each limb of the baby—not a fetus but a BABY! The baby’s heart beat means that they have feelings and silently scream as they are literally ripped apart. Horrible cannot describe what they feel.
Yet, the Democrat Communist have NO interest in this. They only want to use illegal refugee children to make their point. The Democrats take good care of them while murdering babies in the womb. Does this make sense? No! The Dem Communists have only one thing in mind, to put America and the world totally under their sick control.
America, wake up and push back!