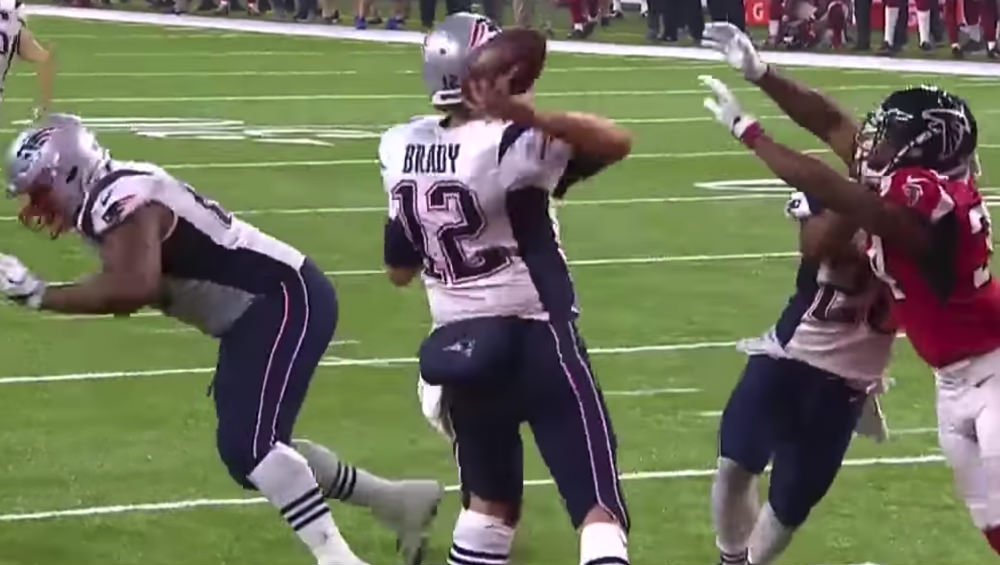 Last weekend America and a growing number of people around the world watched the fifty-first edition of the Super Bowl which pitted the New England Patriots against the Atlanta Falcons. The game was filled with excitement– a dramatic comeback, the first Super Bowl to ever go to overtime, and plenty of records were set. Many are already calling it one of the greatest Super Bowls of all time.

However, for the purpose of this article, I want to focus in on one player, and that is the Super Bowl MVP Tom Brady. Last night, Brady secured his place in history as one of the greatest quarterbacks to ever play the game, improving his all-time Superbowl record to 5 – 2. (I take great pleasure knowing his two losses came against my New York Giants).  Last night, he threw a record number of passing yards and completions.

In many ways, all Brady does is throw a football. Surely, anyone can do that – right?  What separates Brady from everyone else who can throw a football in this world? Well, I would like to point out three attributes, and these are apt for each and every one of you in your lives.

In many ways, I feel the difference between many in this world is not always a talent difference – it is a failure of belief.  Anyone can say they are going to do something, but it takes an inner belief in yourself, in your abilities to go and do it. This belief cannot be taught in a school; it cannot be learned from a textbook, and no one else can “believe” for you. I can tell you I believe in you and give you all the encouragement in the world, but if you don’t believe you can do something, chances are you will not. Confucius once said,

If there was anyone in this world who did not believe Brady had a deep inner belief, he answered those critics last night. Let me prove it to you by putting you in his shoes. You are playing in the Superbowl with millions of eyes on you. You are down 28 – 3 with five minutes remaining in the third quarter. How many people do you know would say game over, thanks for playing, and there is always next year?

It takes someone special to keep grinding, to keep fighting for every yard, and to keep believing things can change. In this case, we all know Brady and the Patriots fought back and won.

I am sure many of you have heard the old saying, “NO pain, NO gain,” and in life, this is true. There are plenty of people in this world who have dreams, ambitions, and who want to achieve something, but honestly, they want it handed to them. They are looking for someone else to do all the hard work. They just want to show up when it’s time for the accolades and glory. They are not willing to make the sacrifices needed, or they give up at the first hurdle. In life, real winners are the ones who make the sacrifices, find ways around or thru the obstacles put in front of them, and never take no for an answer.

So what type of sacrifices did Brady and his teammates make? They have, first and foremost, sacrificed quality time with family every Sunday for at least five months, and also potentially on Thanksgiving, Christmas, and New Years. They have to make the sacrifice to eat right, staying in shape, and dealing with the media, among countless other parts of their lives.

Lastly, they also have to do a lot of work when the cameras are not on them, and no one is watching. They have to stay in shape and turn up to practice regardless of how they are feeling or the weather conditions. How many mornings have you woken up, felt like crap, and wanted to just stay in bed? How many times have you seen the weather when it’s cold, wet, or windy and felt like it was hard to go to work, etc?  Well, you are making a sacrifice and players are the same.

I am sure some reading this will point out that the above two attributes are shared by many who play football or any sports (and many professions). You would be 100% correct.  However, love him or hate him, there is something that separates all-time greats like Tom Brady with the vast majority of football players, and that is the inner drive to always want something more, to always set new goals, and to continue to work hard to achieve them.

I am sure Tom Brady’s goal when he joined the New England Patriots all the way back in 2000 was to win the SuperBowl, and he did just that in 2002. However, he changed his goal and won it again 2004, and 2005, and the goals kept changing after each win.

When the record is all said and done, I think the most inspiring thing about Brady is always setting new goals. When a quarterback hits 35 in the NFL, everyone knows retirement could come at any day, and it is easy to start reminiscing about past games and victories. There is a reason so few quarterbacks play in the SuperBowl past 35, and their records are not all that great.

However, Brady does not allow what defined others to define him. He is 39 years of age and has won two SuperBowls in the last three years. And who would rule out him winning a sixth before he decides to quit?

While this article has focused on the attributes of Brady, they are also the same for each of you reading this article. I am sure many of you have personal goals you would like to achieve in life. Whether they are work, financial, personal, or life-long goals, the questions above are the same for your situation. Each person reading this article has at least one thing in common, and that is you have greatness inside of you, and are filled with potential.

You CAN make a difference in this world, IF you believe in yourself, and are willing to make the necessary sacrifices.

Jonathon Dunne is an Irishman who dreams of one day living becoming an American. He has a weekly podcast featured on the Blaze which you can find by searching for Freedoms Disciple on Soundcloud, ITunes & Google Play. He is also a writer, public speaker and the CCO of Lanterns Buzz Radio Network.