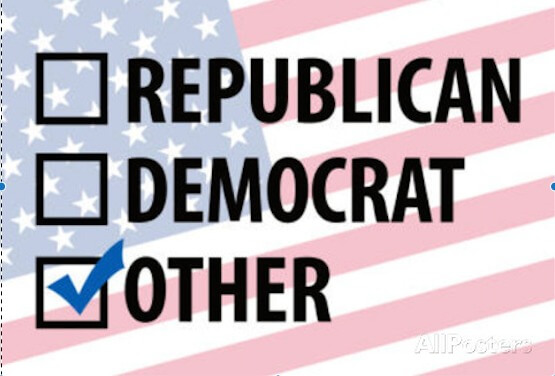 The political situtation in the U.S. today is a lot like it was in the 1850s.

Back then there were two major parties: the Democrats and the Whigs. The big issue of the day was slavery. The Democrats were pro-slavery, and the Whigs were indecisive. When the Supreme Court ruled that owning slaves was a Constitutional right, the Whigs basically gave up the fight.

So it was that anti-slavery people started a new party, the Republican Party. In 1856, they ran their first candidate for president: John Fremont. He lost. Democrat John Buchanan won. In his inaugural address, Buchanan boldly declared that the fight over slavery was over, the anti-slavery people all knew this and had accepted their defeat, and it was time for the country to move on to more important issues. Issues like repairing relations with Europe that had been so badly damaged by the Mexican-American War — most Europeans condemned the U.S. for that war — and building a road to California.

The Whigs self-destructed at that point. In 1860, the Republicans tried again with Abraham Lincoln. As I’m sure you’re aware, he won. The Republicans replaced the Whigs as one of the two major parties. The Democrats went to war rather than accept an anti-slavery president.

There are a lot of parallels to today. There isn’t one pre-eminent issue like slavery. But we have one party, the same Democrats, who stand strongly in favor of abortion, homosexuality, racial strife, and socialism. We have another party, the Republicans, who don’t stand for much of anything, and who promptly surrender once the Supreme Court rules or the president issues an executive order or the media call them racist. Whenever the Democrats win an election, they declare that this proves that the fight is over, and conservatives should just accept defeat and move on to really important issues, like how much tax money should be given to Democrat campaign contributors.

Some conservatives say the time has come to create a third party to replace the Republicans.

As I write this, Donald Trump is the presumptive nominee for the Republican party. Few conservatives see Trump as the best possible candidate, to put it mildly. This is not a unique development. Few conservatives thought Mitt Romney was the ideal candidate. Or John McCain. Or Bob Dole.

I don’t think any serious conservative supposes that we could form a third party a few months before an election, run a candidate, and win. The most optimistic plausible scenario is that we could form a third party that would lose its first few elections, but build strength and finally win. The Republican Party would have to collapse, with the refugees mostly fleeing to the new party.

There is one very important difference between now and 1850: The two major parties are more deeply entrenched. In 1850, anyone could start a political party, collect contributions, and get on the ballot. Today, there is one thing that the Democrat and Republican Parties agree on: the need to protect incumbents. They have passed “campaign finance” reglations that make running an election campaign difficult. I used to be the officer in a Political Action Committee responsible for keeping us in compliance with all the regulations. There is tons of paperwork, including daily reports as election day nears. The established parties have staffs of lawyers to do this. An upstart has to build it from scratch. There are all sorts of restrictions on what we used to think was free speech. If two or more people pool their money to put up a billboard or publish an advertisement encouraging people to vote for their preferred candidate without first getting permission from the government, that’s a crime and they could go to jail. The Republican and Democrat candidates are automatically listed on the ballot, but a third party has to jump through all sorts of hoops.

Starting a serious new party in today’s environment will be hard. If the Republican Party doesn’t promptly collapse, it would split the conservative vote, allowing the Democrats to win.

The serious alternative to starting a new party is to take over the existing Republican Party. Sure, that could be tough. Presumably the present establishment won’t go down without a fight.

But one thing that Trump’s candidacy has proven: the establishment can be beaten. They didn’t manage to rig the game sufficiently to make one of their preferred candidates win. The Republican establishment dislikes Trump more than the hard-core conservatives. But he won anyway. The deck may be stacked, but it’s still possible to win.

Indeed, Trump may be a blessing in disguise for conservatives. He may break the hold of the party establishment. And when he’s done, he will leave a vacuum.

Suppose that Bernie Sanders somehow won the Democrat nomination and the presidency. When he retired, would the Democrats go on as if nothing had changed? Unlikely. He would move the party further to the left. He would leave behind a legacy that might last for many years. Sanders has an ideology that a Sanders victory would have been embedded in the party consciousness.

But Trump does not have an ideology. He has a personality cult, or at best, his supporters are impressed that he is forceful and capable. When he exits the stage, he will not leave a legacy, because he has no legacy to leave. He will not move the Republican Party left or right or anywhere else because he doesn’t care which way it goes as long as he can claim to be steering it.

He will leave a vacuum. He has broken down the wall. Let’s pour through after him!