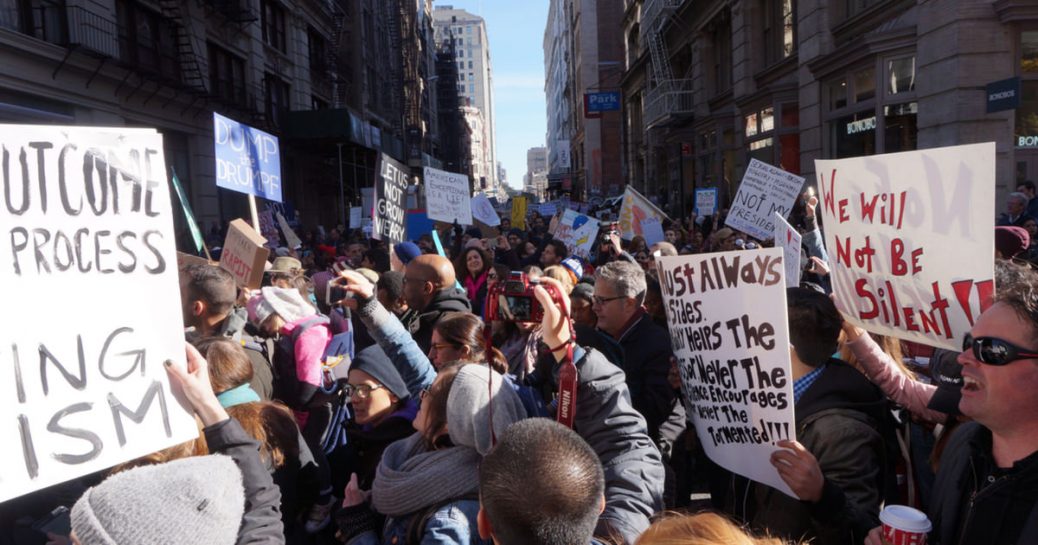 Quoting Yogi Berra, “It’s like deja-vu, all over again.” Now that the Republicans are back in power the Left (democrats, Hollywood and mainstream media) have dusted off all their old rude crude tactics in an attempt to brand America a hellhole of discontentment, pain, suffering and unfairness.

Yes, there was real pain and suffering under Obama. And yet, fake news portrayed Obama’s regime as 8 years of sweetness and light. The Left’s daily lie was if mean white racist Republicans in congress had only cooperated with him, Obama could have done so much more. The truth is congress did cooperate, fearful of opposing the first black president.

Within hours of Trump taking the oath of office, Leftists were out in full force behaving like vulgar lawless maniacs. Suddenly, Trump is an evil lord making everyone’s life miserable. Leftists began fund-raising, 40 mil thus far, to impeach Trump. http://bit.ly/2kduRsi Their henchmen began physically and politically beating up any and everyone they discover voted for Trump.

This headline really got my goat. “Girls Scouts Under Fire for Marching in Trump’s Inaugural Parade” http://bit.ly/2iVB0wp

Folks, this is the kind of deplorable arrogant bullying from the Left that we have passively tolerated for far too long. C’mon, beating up on the girl scouts? Really? The Left pulls this crap because they can. My political activism began around 2008. Since then, all I have heard from experts on our side is do not push back too hard, less we make Leftists angry and we get negative press. News flash, fake news demonizes us even when we do nothing.

Remember that best-seller, “All I Really Needed to Know, I learned in Kindergarten”? I was a small kid. When bullies in our Baltimore projects confiscated my lunch money, cousin Jimmy got in their faces. The bullying ended. This is how we must deal with Leftist bullies. I love Trump’s zero-tolerance with being slandered by fake news. Trump’s Chief-of-Staff Reince Priebus proclaimed, “We’re not going to sit around and take it.” http://bit.ly/2jJbK9z

Now, about that demeaning anti-Trump women thing in DC. Fake news claimed half a million women showed up. It was awful folks, triple X rated. Leftist media celebrated and normalized profanity, deviancy and vulgarity. With kids in the audience, Madonna repeatedly dropped F bombs and told president Trump to “suck a d***.” http://dailym.ai/2jbCPjM Ashley Judd ranted about bloody sheets and tampons. Thousands of women wore hats they described as “p**** hats” at the rally. http://read.bi/2kfxDwh Unbelievably, Trump’s life was boldly threatened from the podium. http://bit.ly/2kpoIfM One protest sign read, “Black Trans Queer Lives Matter.” I thought, how many of them are there in the world? Ten?

Call me crazy, but what are these women so upset about?

For crying out loud, Leftists have branded maleness a mental illness. Fathers are disrespected and portrayed as idiots in sitcoms and movies. http://bit.ly/2kqpxRB Women dominate college campuses because guys refuse to stomach being told what jerks they are in forced feminist “re-education” courses. http://bit.ly/2kq85g8 Though fake news ignores it, there is an aggressive feminist War on Masculinity. http://bit.ly/2koX5Qc Women have confided in me their discomfort watching football with the players running around wearing pink.

Leftist media glorified a lesbian couple for trying to feminize “queer” their 17 month old baby boy, forcing him to wear tutus. The parents admitted, “he hates it.” The couple says they are frustrated by their son’s male tendencies. http://bit.ly/2jbAIwB

I ask again, what on earth was that mob of crazies in DC so angry about? Women hold 60% of personal wealth, 51% of stocks in the US http://bit.ly/2jbm9Jo and live longer. And, they own most of the shoes.

I am black. I cannot imagine waking up, looking at myself in the bathroom mirror and saying, “Hey big guy, America is really screwing you. Spend 3 grand traveling to DC to protest.”

Folks, the insane out-of-control anti-Trump protesters are a minority. Trump’s landslide electoral victory proves that. Still, we can no longer allow breaking the law and bullying people with impunity.