They Really are Out to Get Kavanaugh 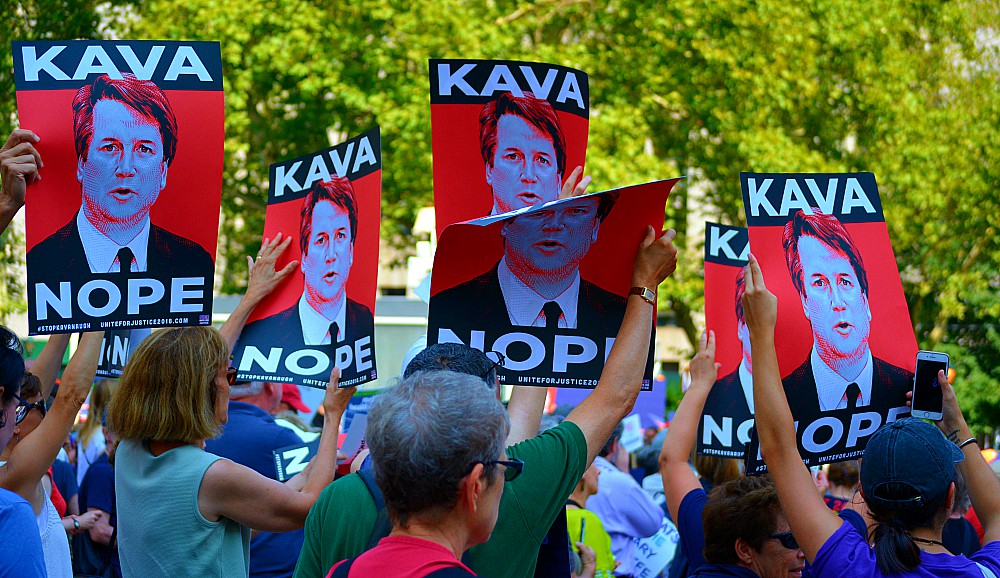 The following is part two of a very lengthy comment someone sent me to a recent World Net Daily article I wrote.

I will not recap part one, although you may review it here.

Once again, my responses to the commenter are indented.

Commenter: Kavanaugh’s conservative views on abortion are not the only reason why the Democrats oppose him. He is an opponent of gay rights and a corporate shill who supports corporate greed over the rights of individual Americans.

Actually, I’ve heard Kavanaugh speak of the Bill of Rights – of which he is a supporter. You know the Bill of Rights, which rather nicely delineates the rights of all Americans equally. It is the left who in fact specifies that we need special rights for “special” people or groups.

And yes, he supports corporate greed, as you put it because he believes, like our silly Founding Fathers, that government should have little authority to regulate business … to death.

Kavanaugh is opposed to everything the Democrats stand for – progress, freedom, quality, and justice. Conservatives like you oppose any nominee to the Supreme Court who is pro-choice. So why shouldn’t the Democrats be opposed to those who are anti-choice? And no one is “pro-abortion “. They are PRO-CHOICE. People who oppose the right of a woman to choose an abortion are not “pro-life.” You are anti-choice. Pro-birth. FORCED birth.

Well heck – where to begin.

Democrats believe in social justice, not justice. We can clearly see this playing out as Kavanaugh has been denied the presumption of innocence despite no evidence or even corroboration of his guilt. I’m not even sure what “quality” means.

As far as progress and freedom – both are laughable, unless you are referring to the “progress” of government to control individual “freedom.”

And while we’re at it, let’s touch on the democrat pro-choice platform. It’s not pro-choice when the only choice one is permitted to support is abortion. So much so that pro-life Democrats in the past have been refused time to speak at Democrat conventions. There’s inclusiveness for you. You may recall, or not, that the late Governor of Pennsylvania, Democrat Bob Casey, was not even allowed to speak at the 1992 Democrat National Convention, because of his strong pro-life views.

It’s not clear whether Kavanaugh would vote to overturn Roe v Wade, but he may very well do this. Along with the other conservatives on the court. But this will never “end “ abortion. Nothing will. Making abortion illegal again will no more end abortion than Prohibition stopped Americans from consuming alcoholic beverages. If abortion becomes illegal again, dangerous back-alley abortionists will instantly spring into action in all 50 states. And they will kill many poor women, or nearly kill them. The poorest women will kill themselves or gravely injure themselves with makeshift devices such as coat hangers, poison, and other things – self-induced abortions. And many poor children will be left motherless.

The Supreme Court can’t just decide to overturn a previous court ruling like Roe v Wade. It can only render decisions on cases brought before them. And no one knows how Kavanaugh, or anyone for that matter, would vote. The left just exclaims it to scare their base into rejecting any constitutionalist jurist.

And if abortion should remain legal in any and all cases, why then doesn’t the left also support infanticide? What’s the difference between killing a child inside the mother or in his or her bedroom, or kitchen, etc.? It’s not an iPhone or Cuisinart growing in the woman. It’s a child.

The only way to prevent abortions is by preventing unwanted pregnancies. All pro-choicers want very much to prevent as many abortions as possible. But this is more easily said than done. But Trump’s appallingly counterproductive planned police of decreasing government funding to help the poor, poor women and their families are only going to INCREASE the abortion rate markedly. The Obamacare you conservatives oppose so vehemently has actually PREVENTED an enormous number of abortions, because it has enabled poor women to obtain contraceptives and medical care, and enabled them to provide for their children, born or unborn.

I’m frankly growing weary of the abortion debate, as there is no debate to be had. We on the right believe in the sanctity of life. There is no difference between killing a baby inside the mother and outside. You on the left try your damnedest to convince yourselves and others that somehow there is a difference.

We believe the States should decide these issues, not the feds. If one State wishes to outlaw abortion, you as a United States citizen are free to move or travel to another. We on the right also have no problem with contraception. If you want to have sex without “being punished with a baby” (h/t: Barack Obama), use contraception. We also insist on personal freedom. With freedom comes personal responsibility – not collective responsibility. In other words, if you don’t want to have a baby, take some responsibility and do what you must to prevent it. Or stop having sex. It’s a simple choice that everyone can make.