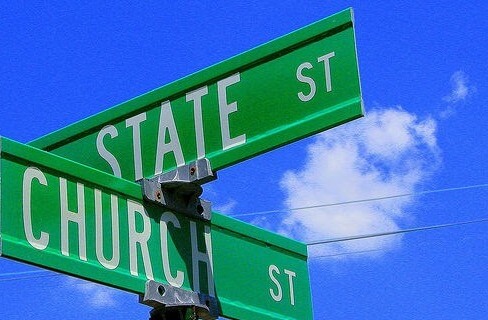 St. Augustine’s (the Bishop of Hippo) work: “The City of God” has much to contribute to the understanding of the principle of two kingdoms. His work was inspired as an apology for the Christian faith in response to the sacking of Rome in 410 AD by the barbarians (Visigoths).  Christianity was at the time the State religion instituted by fiat by the emperor Constantine after his successful outcome to conquer his enemies at the Battle of the Milvian Bridge in 312 AD. He was said to have had a revelation of a cross and stated that under this sign I conquer. Constantine wanted to unify his kingdom under one religion so after 400 years of persecution Christians became by decree the favored religion of the State. Unfortunately conferring favored religious status and decreeing that all should be members of the Christian faith on a nation of predominately pagan and polytheistic peoples did not settle well with everyone. It was certainly not the same for individuals who came to faith in Christ by hearing the Evangel and accepting the price of their conversion as likely martyrdom at the hands of Roman emperors. Augustine wrote to address the attacks against Christianity predominantly from not the faithful but by those who chose Christianity as an opportunistic way to find favor and cultural conformity and worldly benefit.  The charges levied by these less than devout pretenders was of what merit was it to serve the Christian God if he allowed their city (Rome) to be destroyed and plundered?  Augustine pointedly identified the hypocrisy of their religion because it was devoid of faith and full of false expectations. Rather than to condemn God for not protecting them they should use this disaster for self reflection about their own sins and disbelief as an invitation to God’s judgement. It was noteworthy that both Christians and some Pagans fled for refuge to the places of public Christian worship, and all who did were spared by the invaders.  Augustine chided the pagans that took advantage of the refuge and after being spared became outspoken against the Christian God. Augustine’s central theme is that by necessity all believers have citizenship in two divided kingdoms. The church’s (all believers) citizenship is a heavenly and eternal one and a worldly citizenship of man’s constructs laws and culture and government. For the Christian he is a subject of the terrestrial kingdom man but His/Her ultimate allegiance must be to God and His kingdom. This principle is fully documented and sustained in both the Old and New Testaments of scripture.

Historically in the United States there have been periods of convergence between the two kingdoms and divergence depending the waxing or waning of the Christian worldview in the culture, but the reality is they have always been separate from each other. Unfortunately the temptation to blend one’s beliefs into a composite  of the two kingdoms does justice to neither, and leaves the individual in a very conflicted state.  While one might desire and have a high expectation of the moral integrity of those they elect to represent them, and if possible their choice be of the Christian faith, this can be very impractical when the majority of the citizenship has rejected both God and the Son of God. For the most part elections devolve from the best choices to the most popular ones. From the qualified to the politically powerful and astute. Ultimately in our system this leaves the voter two unpleasant choices. (One must remember there is never a perfect choice). Some will decide that both remaining choices are too odious to consider that to be faithful to God and their conscience they must not vote for either one. I believe that if the Christian is cognizant of the concept of the two kingdoms He or She should use both reason and prayer and make a choice between the two offered ones. Although we may desire to be apolitical the government God has permitted us to have enjoins us as earthly citizens to participate.  Ultimately God determines the outcome of the decisions we believe we make, but to avoid voting for the lesser of two evil choices at least forces one to consider which one God might use the most effectively to preserve our freedoms, especially of conscience, as protected by the Constitution. It is one thing to wait intently on the rapture of the Saints out of this world or to withdraw to a monastic retreat and quite another to attempt to restrain and preserve a civil government that is bent on charting a course for national disaster. If the Lord tarries it might be wise to consider not only the consequences of making the wrong or right choice for leadership, but the very real consequences of making no choice at all. Or should only people without conscience make our choices for us?