The Truth About Syria 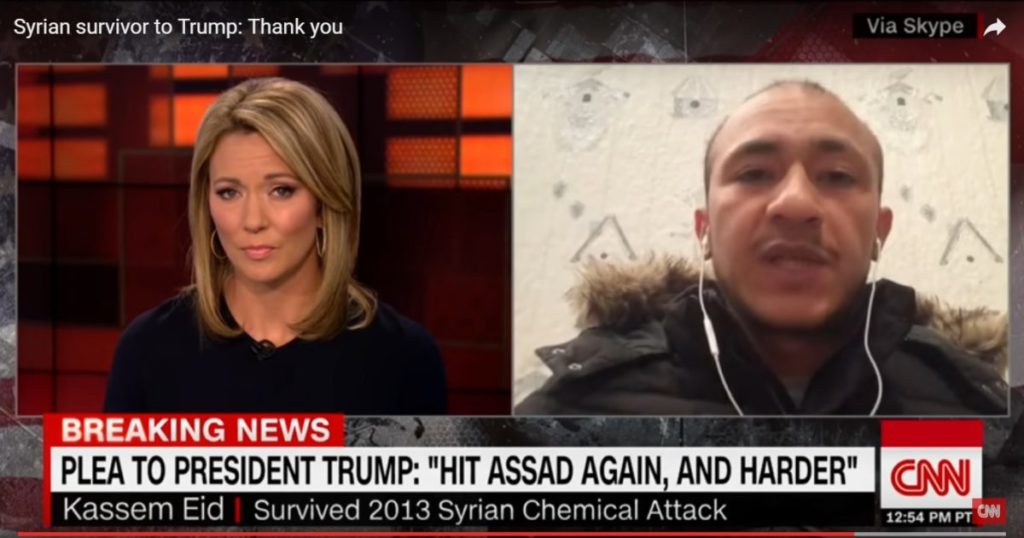 Do you want the truth about Syria?

Well, the full truth has not yet been made public, however, there are a lot of signs that truth is that the unelected President Bashir Al Assad was not only storing chemical weapons, but he used them on his own people.  From the official statements by the Trump administration, al-Shayrat military airfield was being used to store chemical weapons even after Assad told the world and made a specific deal with the United States to remove ALL chemical weapons from his country. If this turns out to be false, President Trump definitely has some answering to do to the American people. However, if it turns out to be true, many of these people doubting the official information being released and choosing to side with Assad are going to feel terrible that they just stuck-up for a man who indeed did use chemical weapons on his own people. The TRUTH about Syria is that no one on social media knows the truth.

I find it totally acceptable to research the internet, conspiracy theories and to keep an open mind, however people should also keep in mind that the internet world of conspiracy theorists is absolutely full of speculators and conjecture. Normally, I would tend to agree with many of these people, but we are seeing absolute insanity play out via baseless speculation and it is concerning that so many people are falling for unsubstantiated nonsense on the internet. People are screaming FALSE FLAG-FALSE FLAG, when in reality there is more evidence that this chemical attack in Syria was indeed perpetrated by the Syrian regime.

First, let me say that pro-Assad folks are capable of propaganda too and it is not only American leftists who are willing and able to try to convince you of their way of thinking via propaganda. I think some of the smarter individuals in the world are falling for internet speculators and pro-Assad Syrian propaganda. I will admit that I myself was speculative of President Trump using military force in Syria when these stories of the chemical attacks first broke, however the more information which is released, the more it is not looking good for Bashir al Assad.

Much speculation is being made saying that there was no chemical attack at all. I doubt these claims 110%, as you can see for yourself that this was definitely a chemical weapon used on these more than 80 dead civilians. Take a moment and view this video *GRAPHIC WARNING.*

That video shows the aftermath of what was surely a chemical weapons attack. Then we get to the point of was it Assad or not. In my personal opinion it doesn’t matter if it was Assad or not…chemical weapons were used and both Assad and Russia both told the world that they had adhered to the deal of removing all chemical weapons from that country. If MS-13 gang members released Sarin Gas in an American city…wouldn’t the politicians and city leadership be held least semi-responsible? Of course they would. That being said, the evidence does not look good for Bashir al Assad, and if those same politicians and city leadership had dropped bombs on an American city they would be charged with crimes against humanity and likely sentenced to death.

US Officials have declassified images which show the plane’s flight path flying directly over the target where the bombs were dropped. For some strange reason, internet conspiracy theorists don’t want to talk about this fact. I know that I am about to provide you a link to ABC News, which is a leftist propaganda spewing media outlet, however this article is true, and there is evidence that Syrian planes left al-Shayrat military airfield and dropped bombs on the town Khan Shaykhun, but again, no one on the side of Assad wants to talk about this…

Some who do acknowledge these facts are saying that they were conventional bombs dropped which hit a chemical weapons depot held by the rebels. Even if that were the case, where did the rebels get sarin gas? Likely smuggled out of the airbase that was hit the other day. Sorry to say, but Assad’s forces are not exactly highly trained and professional soldiers. It is not beyond imagination that one of smuggled chemicals out of that airbase and gave them to their rebel buddies. However, I revert to my point that Assad told the world there were no more chemical weapons in Syria.  This makes him directly, or indirectly responsible for the horrific deaths of those people.

Below this paragraph is raw footage from inside of the hospital where the victims were brought to where a Syrian doctor explains that it is NOT chlorine gas, not fake gas, but sarin gas. He also explains that these chemical weapons are being used on a regular basis across the country and he pleads with the international community to DO SOMETHING!

So, let’s add some stuff up here…

1: The people on the ground said the attack came from the sky

2: Nicky Haley, The U.S. Ambassador to the United Nations said it came from the sky

3: Radar shows Syrian planes leaving that airfield and flying over the town of Khan Shaykhun

4: A Syrian doctor says it was sarin which is used regularly and pleads for international assistance

6: Secretary of State Rex Tillerson says they have zero doubt this was carried out by Assad’s regime

7: General James Mattis, now the Secretary of Defense and one of our most knowledgeable and formidable leaders, planned and carried out the calculated strike based on intelligence he saw.

8: A Syrian refugee now living in America has praised Trump and said he has been waiting 6 years for someone to do something. He is a survivor of the 2013 attack by Assad

People can think and believe what they want to, but to call Trump some war-mongering New World Order puppet after reviewing all of the aforementioned information is unjustified and just plain wrong. Take a breath, one luckily not filled with sarin gas, and wait for more information. If you honestly think Trump, Mattis, Tillerson, Haley and many others are going to risk their livelihoods and reputations on such a big lie…you are not thinking clearly in my opinion.

Also keep in mind that neither Assad, nor Russia, would ever come out and admit that they used these weapons. Pointing to their denial as proof is like pointing at a murderer denying their guilt when evidence is stacked against them. Assad and Vladimir Putin would be crucified and charged with crimes against humanity among other war-crimes if they came out and admitted that they even had a little knowledge of this.

I understand that this is a complex situation, but I am imploring those sticking up for Assad to reserve judgement until more information is released. If President Trump is lying to the American people, he should be held accountable for that (that is coming from a yuuuge Trump supporter). However, if he is telling the truth, then many of you folks out there are standing up for a man who just dropped sarin gas on innocent people, his own people at that. No one outside of those who have security clearances high enough to view the intelligence reports really has any clue what they are talking about. Those who viewed the intelligence are convinced it was Assad’s forces that dropped those chemicals from airplanes out of that specific airbase. If you doubt the official story, I challenge you to go to Syria and tell the victims and their families that you think they are faking all of this.

It is my humble opinion that President Trump absolutely made the right decision, however we cannot be sure of this until more information is released and made public. If I am wrong, so be it. But if you doubt Trump and you are wrong, you are supporting a war-criminal over your President and your own military. Think about that for a moment.