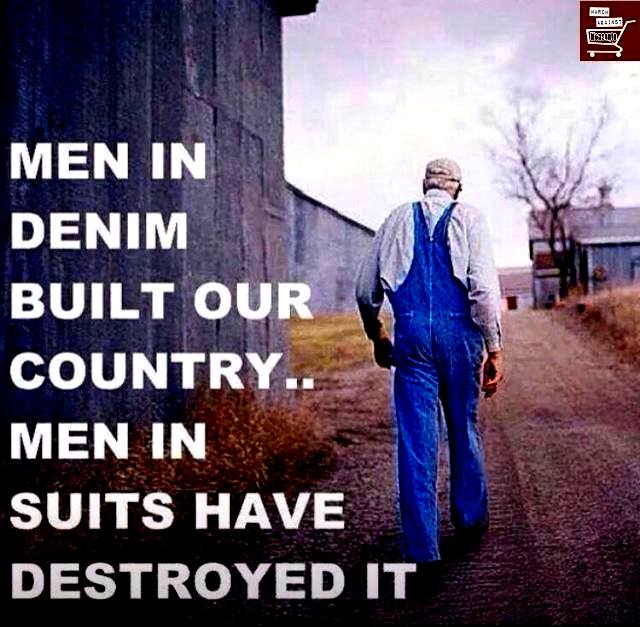 If you grew up in the middle west where most things were seen in straight-forward, basic principles and not the “nuances” of “political correctness” and “democracy” you would see the contrast of living in cities, or worse on a college campus.

“Flyover country” has men in rural areas, working with their hands, spending a lot of time alone and thinking. They have a clarity of vision that often eludes the “great minds” of government and major media. Such a man is northern California farmer Phil Murphy who called a local talk radio show in Lake County with stunningly clear and clever analysis of the Democrat wailings on the Russian manipulated election for Hillary.

Phil noted that Jeff Bezos, owner of the Washington Post, has billion Dollar contracts with national security bureaus, is not alone in that aspect and all such people are very upset that Mr. Trump intends to reduce bureau those budgets significantly! Could these folks be out to discredit the election?

Phil pointed out Russia owns the “RT TV” network that broadcasts from Washington, DC, named all of their on-air people and that they are all “hard left” and not supportive of Donald J. Trump any way! Certainly if they wanted Mr. Trump to be President they would have a stable of pro-Trump personalities on-the-air! A brilliant point that was totally missed, or repressed, by major media and put together by a man they would never turn to or even respect in their arrogance!

It is a fact many of our most important ideas and inventions have come from men who have spent a lot of time in the fields, vineyards, orchards and barns of America, usually alone. Men who have had a lot of time to think in “fly-over” country. Phil’s analysis was the best we have heard all week and we expect to be seeing and hearing it on TV and radio soon as the word will now get around.

Add to that hacking is virtually a trade and most often self-taught. The best self-teaching book we found is “Hacking” by John Stark, $2.99 in Kindle format at Amazon.com. It is step-by-step, well-written and includes many free routines you can get that do the work. The process is not yet fully automated in the commercial, public market, but almost certainly it is in government and business.

If you do not have a Kindle as you can get a free program from Amazon that emulates Kindle on your computer. This is a “teach yourself” manual for the fine art of hacking with the idea you will be a “white hat” hacker testing your and client systems for ways to increase their security, but the dark side is obvious and probably a big part of the market for that book.

The essence of “hacking” is that much like burglary it will never be eliminated as computers must have entry points to function much as homes have doors and windows. Locks and bars work up to a point, but there is always that guy with the lock picking tools or a crowbar.

The wailing Democrats narrative is destroyed with one simple fact that will not go away and will loom larger in the weeks to come. No proof is possible where they refused to let the FBI examine their system or even help them to defend it in any way. When Republicans were called they welcomed the FBI’s assistance and feel confident they were probably not hacked during the Presidential campaign. They also did not have a Bernie Sanders back-stabbing to deal with.

Clearly the intelligence testimony in Congress was bogus as there was no possible evidence without access to the source system in the DNC. There is a much higher likelihood an angry staff member forwarded the subject emails to Wikileaks for his, or her, motives as campaigns as controversial as that run by Debby Wasserman Schultz are bound to generate very unhappy operatives. All it takes is one.

Nonetheless, America should be listening more of the people who take the time to seek and find the plain truth.