The Perfect Man – Until Death Do We Part 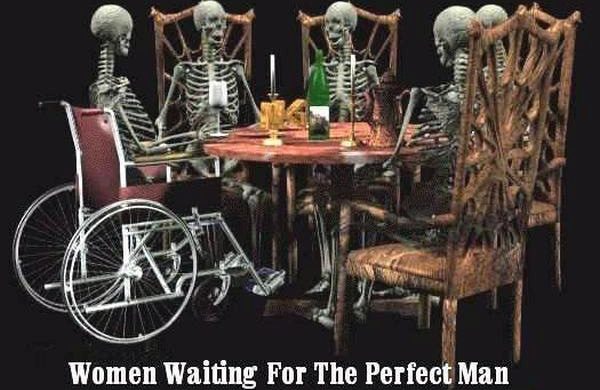 There is a clever meme called The Perfect Man that shows a once lovely group of old lady skeletons, one in a wheelchair,  sitting around a table with a wine bottle and candles on it with the words Women Waiting for The Perfect Man written below the picture.  Funny stuff, but this is no joke. Maybe those ladies would have been better off waiting for a few good men.

Actually, there are two world ideologies that claim that their prophet is The Perfect Man.

One of those world ideologies just so happens to be our own: Christianity.  We hold dear the fact that the Lord and Savior Jesus Christ was without sin, was crucified willingly for our sins, was buried and rose again on the third day to reign at the right hand of God until the day of His second coming, when He will return to recover His people and ultimately bring peace and harmony on earth is it is in Heaven. That is a beautiful image to behold.

That is not to say that our Perfect Man wasn’t capable of “turning over tables” when confronted with greed and misguided allegiance, and there is no short supply of God warning us against following foreign gods, who would become snares to us if we allowed them in our midst. Read the Bible; it’s not me saying that, it is God saying that.

Well, what about turning the other cheek, you ask?  Certainly, Jesus would want us to forgive other Christians when we are offended by something that they say or do.  After all, the blood of Christ is thicker than water, as the saying goes.  But does God really want us to turn the other cheek when we are slapped in the face with evil itself? I don’t think so.

The defenders of that other faith claimed that they would raise money to place another billboard nearby that would stress the peace and love of their world ideology. That doesn’t seem to have happened. Don’t wait too long for that billboard either, ladies.

Soon thereafter, the media belted out their typical online smear campaign reliably designed to destroy the character of the messenger, rather than to refute the message, using many of the market-tested words that are sure to rile up the radical faith followers, such as anti-Muslim, inflammatory, degrading, Islamophobia.  You get the point.

But, how did the “believers” of this ideology and their complicit and compliant media know the identity of that particular Perfect Man, who was never once named?

All that the billboard says is that this “Perfect Man” was a rapist, he married a six-year-old, he had 11 wives (nine at one time), he was a slave owner and dealer, he beheaded 600 Jews in one day, and he tortured and killed unbelievers. That’s enough to make even old lady skeletons shiver in their bony boots.

Maybe it was because The Koran states that Muhammad is the Perfect Man for Muslims to imitate if they want to meet their foreign god Allah (Chapter 33:21), or maybe it is because The Koran (and other significant Islamic writings) support the truth of the billboard statements.

These few good billboard men are serious about educating America.  In fact, this year’s billboard campaign includes a website called The Perfect Man Truth that offers clickable links to support the points made on the billboard.

So, what are Christians and Jews (unbelievers) waiting for, before we stop this foreign ideology from further infiltrating America?  Are we waiting for our Perfect Man to save us? Is that what you think our God wants from us? Or, would He want us to start turning over tables and defending ourselves?

Maybe we should start by supporting the efforts of these few good men to further the truth by getting more of these billboards placed throughout the country before death indeed do we part.