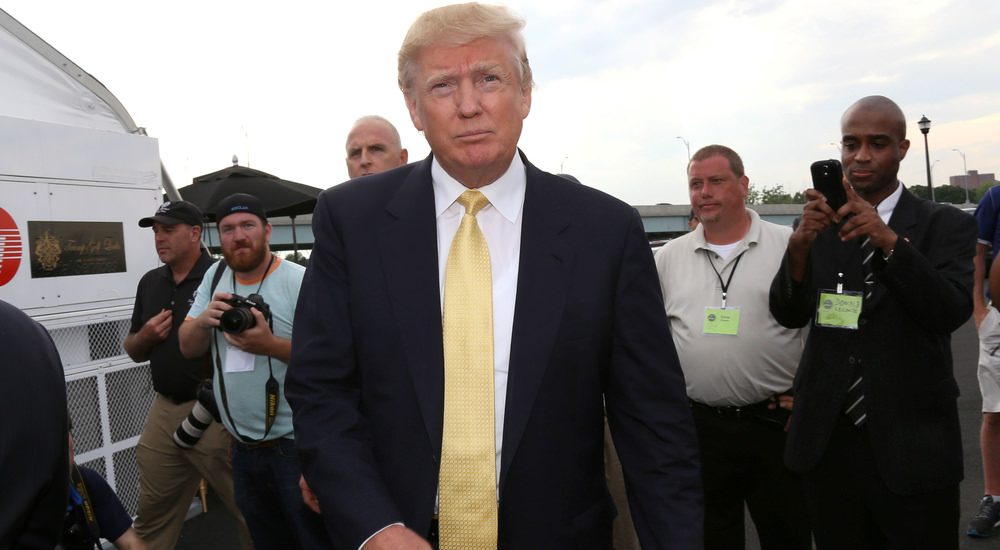 The People have chosen.

With all the vitriol and protests from the Democrat and Republican Party over the nomination of Donald Trump, one fairly important fact has been ignored. Donald Trump was not elected as nominee by the GOP, nor by Big Business or even by Fox News.

He fought a primary against 16 other hopefuls, and was elected overwhelmingly by the American voters.  I for one am tired of hearing republican establishment politicians telling us how stupid we were to elect an outsider ,when we could have chosen Jeb Bush, who spent over 100 million dollars on a campaign that netted him just 5% of the vote. Or Lyndsey Graham  who failed to even make the main debate stage.

It seemed obvious from the start that the voters were sick to high heaven of the big establishment politicians who only saw Washington as a job for life and the voters as too stupid to realize it.

Well they have now all left the stage, some of them hopefully, never to return.  We are left with two candidates  one a 30 year career politician, with a history of corruption and illegal activity which culminated in the death of our Ambassador in Benghazi .and 3 brave defenders who waited in vain for help she refused to send while she was secretary of State.   Who kept her departmental records on a private open server that was open to any hacker with a rudimentary knowledge of how to send an Email? And which resulted in a massive breach of security. Who desperately tried to erase the evidence, only to discover WikiLeaks has them and are now sharing them with the world. A woman who was finally investigated by the FBI. Until they were warned off by the DOJ.

Opposing her we have an outsider, a non-politician and successful businessman who have achieved fame as a reality TV star both here and in Europe. He has no big corporate donors and, most frighteningly for the Democrats he does not need to do this for monetary gain. His lavish lifestyle is superior to that of the President. As he frequently jokes, trading his executive jet for Air Force One is a downgrade.

When asked why he is doing this his reply is equally shocking for the establishment. He states America has been very good to him for many years, and now he wishes to put something back.  A refreshing idea more in keeping with George Washington, than any 21st century politician. He has gained more republican votes than any other republican candidate in history.

Millions of new GOP members have rushed to sign up. Despite a combined onslaught of the Republican and Democrat parties, aided by the media and the pitiful and age old tactic of wheeling out women who suddenly recalled being assaulted 20 or thirty years ago. He is still there. It worked against Herman Cain, and Mitt Romney. It was used as a weapon by both sides including JFK and Hillary’s husband who you may remember was impeached and fined for his conduct.

Many years ago back in England a new people’s party arose called The Referendum Party. Its slogan was Let the People Decide. And it was led by a corporate businessman Sir James Goldsmith. And was pushing for a referendum on the UKs membership of the EU.  I became active in that party and had the privilege of meeting Sir James at a rally in London. At that time he was suffering from terminal cancer and had been advised to stop campaigning and seek treatment. He refused and died some weeks later. I personally have never forgotten the man, who put his beliefs and country ahead of his health. He provided me with years of inspiration as I campaigned with UKIP and now as a US citizen with the GOP.

The Referendum Party also reformed, many of its members, including myself joining the fledgling United Kingdom Independence Party, and pressing ahead with Sir James’s vision of a free UK.  The outcome was the Brexit movement that finally freed the UK.

It is no co-incidence that U.K.I.P leader Nigel Farage has aligned himself with the fight for freedom in the US being spearheaded by the peoples champion Donald Trump.  There are parallels of course and many differences, I for one trust the people.  The echo of Sir James’s cry Let the People Decide. Rings load and clear in the land of the free. I hope it is loud enough to reach the republican politicians who are even now putting personal bias ahead of their country. If they truly stay home and sulk they have revealed themselves as willing to destroy America rather than support her.  In such a case America will remember should any of them have the effrontery to stand for office in the future.