The Peace Cross and the Ongoing War Against Religion 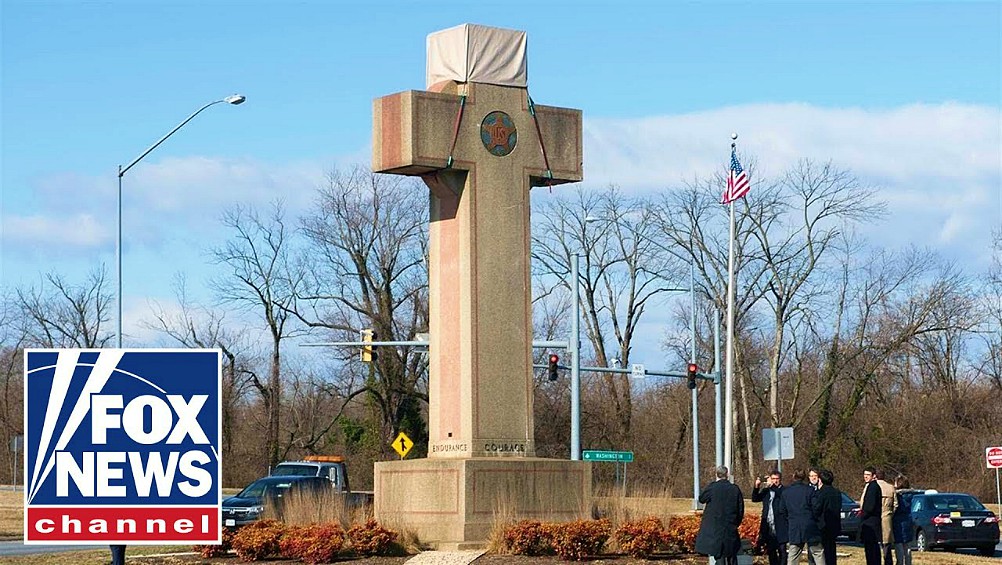 World War I was a global war that spanned across continents and oceans; Europe, Africa, the Middle East, Pacific Islands, China, Indian Ocean, North and South Atlantic Oceans. It was also known as the First World War, the Great War, and the War to end all Wars, and was one of the largest and deadliest of wars in history. Based on the mobilization of over 70 million soldiers, an estimated 9 million combatants and 7 million civilians lost their lives in a conflict that lasted from July of 1914 through November 1918.

At the end of World War I and the Allied power victory, and upon the return of military troops to their homeland, a group of local veterans decided to have a memorial erected in honor of the heroes who made the ultimate sacrifice and last full measure of devotion in the war. In 1925 in Bladensburg, Maryland, the Peace Cross, also known as the Bladensburg Memorial, was put in place on what was privately owned land that reverted to public property in the 1960s. The 40-foot tall memorial was designed by the mothers of local soldiers lost in battle and has stood as a symbol of honor and courage for 93 years.

The years that World War I ravaged a significant part of the world was a dark period for mankind. The men and women who gave their lives in defense of justice and freedom deserve our utmost of thanks and praise, and the Peace Cross was a small gesture to show our appreciation. But in postmodern America, there are forces, some good, some not so good, that have little if any respect for the war dead, especially when the issue involves religion, which was not the driving incentive for the memorial.

In 2014 the American Humanist Association (AHA) filed a lawsuit that sought to remove the memorial due it being a cross, a Christian religious symbol that stood in the public square and in violation to First Amendment of the Constitution’s separation of church and state. The gravity of this action has wide implications, such as the crosses in Arlington National Cemetery, the Ten Commandment monuments.

In October 2017, the US Court of Appeals for the Fourth Circuit ruled against the memorial as unconstitutional on the grounds of the “Lemon Test”, an easy out for what I believe was a lazy decision. The Lemon Test had its origins in a 1971 Supreme Court case of Lemon v Kurtzman, and out of it came this determination that when dealing with a case involving freedom of religion, and assuring the statute does not violate the “Establishment Clause”, three elements must be met; First, the statute must have a secular legislative purpose; second, its principal or primary effect must be one that neither advances nor inhibits religion; third, the statute must not foster an excessive government entanglement with religion.

It has been timely and a long road; the nation has been waiting for a showdown, and the Peace Cross will be the case, making its way to the top. On February 27, 2019, the Supreme Court heard oral arguments in the case of American Legion v. American Humanist Association. The Court has an opportunity to bring a measure of clarity to this often time’s controversial issue of religion in the public square.

There were a number of briefs filed on behalf of the Peace Cross, including by the Trump administration. One, in particular, was by the Cato Institute that requested the Court rule out the Lemon Test, and argued that “the Establishment Clause was designed to prevent religious persecution, not to eradicate religious symbols from public life”. The local commission that oversees the memorial insists it is a “benign symbol of military valor and sacrifice”. Some might ask what about non-Christians who know the cross is a sacred symbol for the Christian faith and perhaps might feel left out. I would suggest, why not just consider the Peace Cross as one big headstone?

The American Legion was represented by the law firms First Liberty Institute and Jones Day, and the AHA by Goldstein & Russell, P.C. The Supreme Court’s ruling should come down sometime in late spring. Let us hope that the decision, aside from its constitutionality, takes into consideration what the memorial means to countless Americans, especially veterans, of all wars. But isn’t it ironic when you consider the Supreme Court opens its sessions with”God save the United States and this honorable court”, and the Ten Commandments displayed on the wall above the justices?

It is regrettable how militant atheists, like those in the American Humanist Association, without conscience or forethought, will interfere and ply their godless maneuvers to erase a memorial that has stood in place for 93 years. They are devoid of sensitivity and compassion, in this case, for the brave men and woman who fought and died for their country. The fact that their action, if upheld, will bring heartache and disappointment to the many that finds comfort and meaning in the memorial means little, if anything. Also, there is another atheist lawsuit, Kondrat’yev, et el v. City of Pensacola (Florida) against a World War II memorial cross that has stood for over 70 years. The godless are out for blood.

I’ve said it once, and will say it again; Atheists believe in nothing, stand for nothing, and are good for nothing.