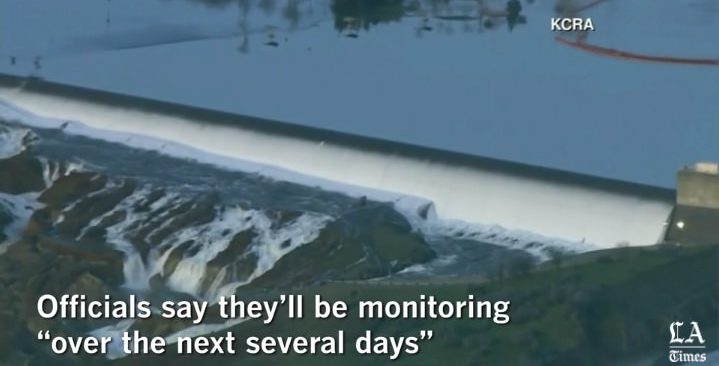 Oroville, California is a Gold Rush town near Sacramento. The name is from Spanish for gold, “Oro,” and that from the Latin “Aurum,” for gold honored in physical science by the symbol “Au,” a common reference for money, in many ways and money is the root of this disaster.

The Jerry Brown Gang wants to build a high speed railroad from San Francisco to Los Angeles, which they announced before looking into the logical shortest path as one where rights of way were not available, nor would they be taken under present statutes. Jerry Brown did not know such trains must run in straight lines as railroad tracks are not designed for very high speeds turns. The route he intended would require the building of a dozen of the longest tunnels ever cut and a similar number of the longest bridges ever built. Cost? Try a trillion Dollars plus!

Jerry’s alternate plan called for an inland system built on open land, much of which is desert, but with start and end points about 100 miles from San Francisco and Los Angeles. These were to be served by busses and the total fares would be double the cost of current air transport, to say nothing about the time consumed. This is tied into the Oroville Dam as the spillway construction funding overlapped high speed rail project planning. Governor Brown was eager to gather funds for state portion of the project and Jerry is very good at robbing Peter to pay Paul.

Recently the London Daily Mail reported, “On Monday, emergency crews prepared loads of rock to be dropped by helicopters to seal the crumbling spillway that threatens to inundate communities along the Feather River in Northern California. Local crews were seen in dump trucks dropping off piles of rock, which were then loaded into the bags with backhoes. The operation to close the gap would begin as soon as it was feasible, authorities said.”

Little of this kind of reportage is seen in California papers. The story behind the story is coming out on Sacramento talk radio and the following “facts” are unconfirmed, but are consistent with what we know:

Apparently the preliminary work for the spillway, made necessary a repair of a design oversight in the original dam design and they failed to find bedrock to support the underpinnings of the addition. Reinforced concrete pillars were planned to insure locating the system, but when the contractor came under pressure to complete the project on time and within budget he took the shortcut of omitting steel reinforcing rods that more than double the strength of the castings. “Rebar” work is time-consuming and expensive even though he bought all his steel from China. Again, all of this is from Sacramento talk radio shows, unconfirmed, but quite believable.

There have also been rumors that lawyers and real estate professionals have been buying options on desert property that has had prices on the order of $100 per acre with one year options to buy for a few Dollars per acre. If the state pays $1,000 per acre the option holders pay the landholders $100 and pocket $900 per acre! Could it be state legislators are the money men in this scheme? Would it be the first time? Will it be the last time? Awaken ye!

Many of us are always suspicious of our elected ruling class in California. I am 100 miles west of this crime scene and within 25 air miles of the Pacific in a Shan Gri La county ringed by old volcanoes ranging from 3400 to 7000 feet and so formidable the railroad never got here, but we see everything coming off the North Pacific going over us inland to drop the water that supports LA County.

In spite of all that is published, California mismanages water grossly letting the almond crop consume as much annually as Los Angeles for the few million Dollars it makes. When we get great rains they do not arrange for ponding and aquifer restoration with injection wells. They let the water return to the seas and now Jerry Brown is plotting to take all water declaring it belongs to the state and not the landowners so he can charge us for is our! Jerry also thinks all the money in California banks belongs to the state and for that reason I no longer bank in California, but in two states with better laws. It is a little awkward but I am secure from the real thieves in California.

A few years ago the California Franchise Tax Board, FTB, took $1,000 from me with a phone call to a Bank of America saying the IRS told them I made $10,300 more than I reported to them! I asked for a copy of the letter to resolve the matter with the IRS and was told that would be illegal! I knew then I was being scammed so I started a war and FTB exposure campaign you can read at: http://adrianvanceshow.blogspot.com/2014/01/normal-0-false-false-false.html

By my reckoning: The California State Franchise Tax Board is taking $1 billion from innocent people, mostly elderly pensioners who are afraid to fight scams of the kind they pulled on me. I got my money back with the help of my state Senator, state Assemblyman and Governor Brown, whom I met at a Westwood One meeting in LA when we were both working for their network. His handshake feels like someone handed you a dead carp, but he was pleasant and charming and his office people were helpful. The Attorney General, now our US Senator, Camella Harris, was not and she is one cold animal on the phone. I really think she is a robot.

I can smell corruption 100 miles away, my distance to Sacramento, and now 200,000 people are in great danger of losing everything, including their lives, because of it. How do we survive corruption?