The Original Cost of Freedom 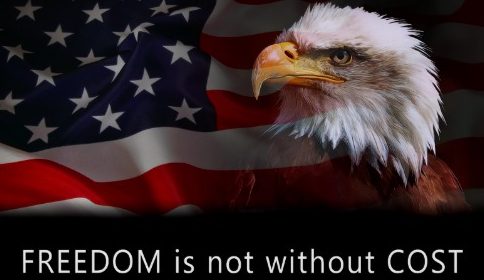 The laws that govern our land were laid out by the Founding Fathers in order to document that these laws of Nature were given to us by God. But what if the people living under these laws have no virtue or no regard for the truth in the words written so long ago. The Creator mentioned in our founding documents have been set aside for a “live for today” secularism which binds the freedom of our society.

The basic premise is that our Republic is based on a belief in a higher authority, and on the basic decency of the people involved. Our government was sent up in such a way that no one group would have too much power, and that society at large would benefit.

It is a culture that should drive politics and not the other way around. The changes in the way our culture is being presented by those in politics have been demeaning, slowly leading to a tyranny and bondage to an elite group regulating every aspect of our lives. The Obama administration, in particular, has taken authority over areas not in the purview according to the founding documents. From the judiciary to the rank and file politician, the interpretation of our constitutional laws has moved us away from the nature that society needs to survive in a progressivism moving quickly towards tyranny. The checks and balances have been removed, and the voice of the people has been largely ignored, with corporations and lobbyists working together to meet the goals they have set for themselves.

We have reached a point now where those who work hard and reach a certain level of prosperity are the ones who are demeaned. We forget that it has always been known in the past that hard work, and honesty, is the key to prosperity. Even the so-called “Poor” in this country have become complacent, allowing those who are still productive to work for them.  A society that does not work towards the prosperity that our past generations understood would move the entire country forward, instead our society seems to be ignoring everything that has worked in the past, and are willing to allow those elites who think they know better, to endanger our rights, reject a basic morality forum in our religious founding and a total collapse of the culture of a country that led the world. We have abandoned the morality and culture that has made this country great.

As the power grows stronger, the elites will blame anyone who opposes them. Religion is suspect, considered weak, and words such as “intolerant” are placed on the moral values that have worked in this country for 200 years. It eventually leads to where it is now, the forced silencing of all moral and societal norms.

So we now have a ruling class of elites, corporations, lobbyists, and consultants. This class has convinced themselves that they know more, know better than the everyday man in the street. They look to force a oneness of all people, a blending of the everyday man into a drone for the government they envision can right all wrongs, and run our lives from birth to death and do a better job of it than we can ourselves. They want us to trade safety and security for freedom. The individual concept of thought will no longer be a primary mover in the progress of this country. There will be no voluntary associations with other, or individual freedoms from the government thought.

One thought to keep in mind as you watch the culture and morals be further eroded by our politicians who no longer work for us. Patriotism is defined as a love for the foundations that have made this country what it has been in the past, it is not a love of government or a love of the power the elites feel free to use for their own profit.

They do not understand that the cost of our freedom is high. The young sons and daughters, husbands, fathers, and mothers, have stood tall and proud to be the bastion of honor that have fulfilled the American dream. I made it through a 20 years military career, and understand that those who have not also give their fullest to the American Dream. And I am not embarrassed to say with a bowed head and a tear in my eye, I remember those who have fallen for the rights and honor of this country. And I will also say, I am willing still to fight for my country in any way needed, and will never stop counting the Patriots in this country that can be depended on to stand firm. So let them mock those who so unabashedly believe in this country. If you are one of them count yourself as a patriot, and the largest asset to this country. We will never give in, we will never give up, and we will stand for what is fine and honorable in this country. And understand that if you don’t agree, I don’t care.

John Veliseks’ new book “One Patriots Opinion- for the Forgotten Men and Women of America” is now available on Kindle. 330 pages that any patriotic conservative would consider a must read and enjoy. Go to Kindle Book Search and type in “One Patriots Opinion”https://www.amazon.com/One-Patriots-Opinion-Forgotten-America-ebook/dp/B07KRW56SB/ref=sr_1_1?s=digital-text&ie=UTF8&qid=1543034387&sr=1-1&keywords=one+patriots+opinion