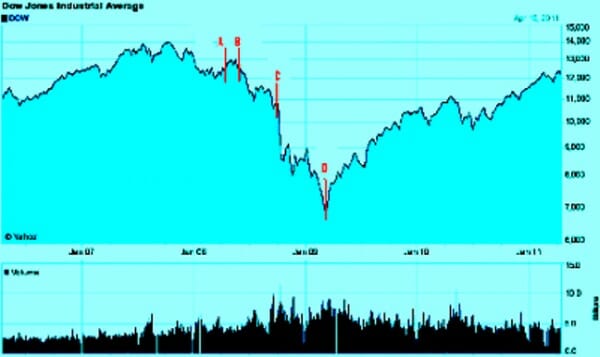 Barack Hussein Obama, former President of the United States is lurking in the shadows off-stage throwing lies into the discourse thanks to the undying loyalty of major media.

Mr. Obama is now claiming Mr. Trumps first year 3.0%+ growth in economic activity is due to Obama’s having saved America by setting the table for such growth.  Pardon me while I vomit.  Nothing could be further from the truth.  In his eight years we did not see greater than 1% growth in business activity while the Obama Gang wrote thousands of restrictive regulations enforced by Greenazoid Bureaucrats in Mackinaws and moutaineering boots with clipboards and badges, the perfect nerds that got through high school without a single date, execute crimes against business, commerce, nature and man to advance the dream of international socialism.

It was the coming of the Obama Presidency that caused the market collapse of 2008.  Proof is in the record of our oldest, most august equity index: the Dow Jones Industrial Average, aka “DOW.”  It includes 30 leading stocks, which change occasionally, as leaders come and go.  The index tracks value and has long been an indicator of our business climate and often a predictor of things to come. It reliably reflects business and economic anticipations.

In October 2007 the DOW was at 14,000 and the market value over 20 trillion Dollars.  As the political season warmed up the DOW wobbled, as it often does before a national election, but on April 24, 2008 when John McCain was nominated the DOW went up (A).

On June 4, 2008 when Mr. Obama was nominated the DOW dropped making a most dramatic decline at (B) in October as it became clear Mr. Obama was going to be President the market went into free fall (C) that lasted that bottomed at 6500 (D) with Mr. Obama’s inauguration having lost 6500 points or $9.2 trillion.

Then Fed Chairman Ben Bernanki announced “Quantitative Easing,” a scheme to put more money into circulation.  Normally to print money the Federal Reserve has to sell $100,000 “T-Bonds,” often to foreign investors to validate printing more paper certificates.  This limits the money in circulation to the value of existing assets and prevents run-away inflation of the kind that destroyed Germany in 1923.

Fed Chairman Bernanke went to work and the market ballooned, but from a flush of baseless money that appeared first in the equities markets having come from banks as they could invest in equities due to the elimination of the Glass-Steagal Act thanks to Ph.D. economist and Republican US Senator Phil Graham and Democrat Bill Clinton on the idea, “We don’t need that old law any more!”  The Bernanke action inflated the equities markets inspiring people to jump in with real money and eventually it was back to over 13,000, but with notes that belonged on a Monopoly board and not in our economy!  The amazing fact is that not one of the leading economists criticized this action!  Or, if they did it was not published.

“Quantitative Easing” violates the empirical principles of economics among them our Genesis Curve. a correction of the Laffer Curve. The elected ruling class knows of the Laffer Curve, the King’s Fifth and “Pharaoh’s one in five” of Genesis 47:24. These are educated people, but few know the historic basis of economics now as it is now taught in colleges by men who no longer want to teach truth, but control it.

When the economy is taxed perfectly the government gets 18.3% of it instead of the 40%+ they take now in federal, state and local taxes. At 18.3% the nation thrives.  If they tax more the economy shrinks; tax revenues decline and the government is relatively more powerful as more people are dependent on it. They enjoy greater awe, respect from fear and applause while basking in their power.  The drug of power is an addiction far greater than any opiate and quickly acquired by a ruling class.

Mr. Obama saw to the printing of trillions of Dollars of baseless Bernanke Bucks and Yellin Dollars during his Presidency.  Sent to the banks to boost the economy they have done everything but because there was no basis for them.  They are fiction; the economy is fact.

For paper currency to work it has to represent something in the economy or in reserve.  Where business people intuitively know the difference they have seen little reason to expand, and more to contract. There has been very little demand for business loans of any kind.  Now Mr. Trump has come to re-light the lamp of the “American Dream!”

This DOW chart is the story of the Obama economy and the crime he committed while in office.  Let us pray Mr. Trump can put America on the right track, which we think is possible as we are only 4.5% of the world’s seven billion people and feeding many, but more are hungry.  We could feed all if our technology and economic principles were allowed to freely operate everywhere, but the District of Columbia, aka “The Swamp” has not allowed that with people like Barack Hussein Obama.  Let us hope and pray that Mr. Trump will have his way.