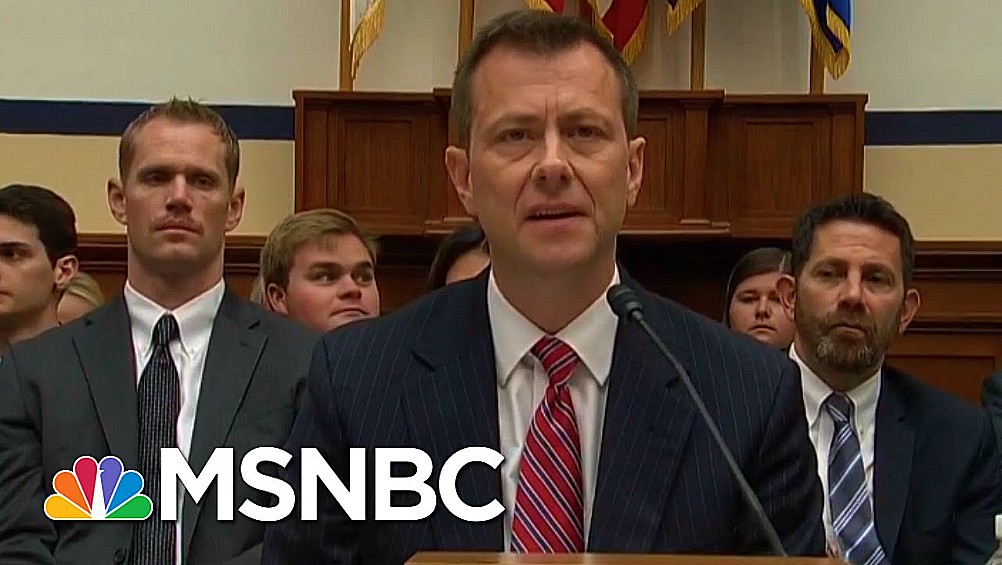 Peter Strzok only gave a hint of his activities to undermine the electoral process of the US.  This testimony recalls other instances of FBI personal willing to interfere and undermine the US, some for money and others simply for political ideology,

Aldrich Ames was arrested in 1994 after causing inestimable damage to national security by providing a list of double agents for $50,000.00. Robert Hanssen had extraordinary access to precious U.S. secrets invaluable to the intelligence services and delivered upwards of 6,000 pages of classified information which compromised every important human and electronic penetration of Russia for the past 15 years.  And the most famous couple, Ethel and Julius Rosenberg a committed communist, arrested in the summer of 1950, provided thousands of classified reports and recruited sympathetic individuals which provided thousands of documents from the National Advisory Committee for Aeronautics, including a complete set of design and production drawings for Lockheed’s P-80 Shooting Star.

Strzok was a lead agent in both the Russia probe and the investigation into 2016 Democratic presidential nominee Hillary Clinton’s use of a private email server while she served as secretary of state. He admitted changing the phrase “grossly negligent” to “extremely careless” in the concluding statement. Both Strzok and Page were booted from Mueller’s investigation last year after he discovered their texts. Strzok has since been reassigned within the FBI. He testified that “It was in no way, unequivocally, any suggestion that me, the FBI, would take any action whatsoever to improperly impact the electoral process for any candidate,” but he did willfully impact the election.  Strzok admitted that his actions could be “just another victory notch in” Russian President Vladimir Putin’s belt, as well as “another milestone in our enemies’ campaign to tear America apart.”

Strzok said it was not his bias and absolute loathing of the president, but the “appearance” of bias that got him booted from the collusion investigation and reassigned to the FBI’s office of human resources. Strzok worked with Page, and FBI officials Andrew McCabe and Bruce Ohr, along with Ohr’s wife, Nellie.  Bruce Ohr was demoted in December 2017 because of contacts he had with the controversial Fusion GPS firm that developed the infamous “Trump dossier” on Russia. His wife, Nellie Ohr worked for Fusion GPS, the firm that commissioned the dossier with financial help from Hillary Clinton’s campaign and the DNC, which further “improperly impacted the electoral process for any candidate,”

It is frightening to see what people like Ames and Hanson will do for money and ego, but it is so much worse to see what people like the Rosenbergs will do for a political philosophy.  We are now witnessing at least two other couples, Stzok and Page, and the Ohrs, thwart the will of the American process of election for some misguided political philosophy.  Russia has been tampering with the US for decades and needs to be investigated and monitored on an ongoing basis, but so has China and several other countries.  What happens after the special investigation is over?  Imagine how much further along we would be if this investigation were started in 2001 and was ongoing in the background, and was not made a spectacle to further divide up the States United.