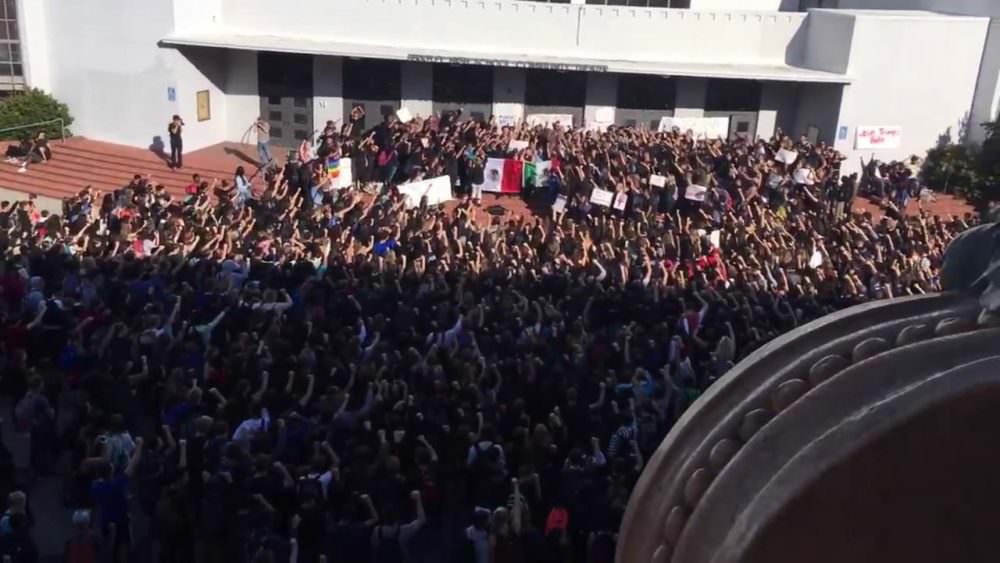 From The New York Times: “BERKELEY, Calif. — Chanting “Not my president,” several hundred protesters streamed through the streets of Berkeley and Oakland in the predawn hours of Wednesday venting their anger at the election of Donald J. Trump as president. Demonstrations were also reported in Pittsburgh, Seattle and Portland, Ore.”
After an unexpected win by Donald Trump “R” over Hillary Clinton “D”, several high-profile marches are occurring throughout America, from New York City to UCLA campuses.
Approximately 2,000 protesters have gathered together on Wednesday Evening to march on to Broadway and then Times Square. Earlier in  the day, several hundred students had marched across the University of  Connecticut Campus. Slogans like “Donald Trump is not my President,” while holding support immigrant posters and rainbow-colored flags.
We are seeing anger and disappointment as well as plans to fight Trump’s agenda, which includes the Mexican wall and banning of Muslims into America.  Eeman Abbasi is a junior psychology and neurobiology major at UConn.  “She says as a Muslim student she feels the American people told her Tuesday night that even though she was born in this country she doesn’t belong here.”
There was an estimate of 500 protesters in the UCLA area early Wednesday morning chanting anti-Trump expletives. The local police are reporting currently of no arrests. Berkeley, Irvine, and other UCLA campuses also had smaller protests.
In the state of Oregon several dozen people blocked traffic in downtown  Portland while forcing delays of trains and light rail lines. From A Tweet: J. Dale Shoemaker @JDale_Shoemaker The chanting comes in waves here. The latest: “No KKK, no fascist U.S.A, no Trump.” @ThePittNews .
The activist group Socialist Alternative, NYC said on Facebook “that they will be organizing a protest in Union Square Park on Wednesday night.” From The Huffington Post: NEW YORK — Thousands of protesters dissatisfied by Donald Trump’s stunning victory took to city streets on Wednesday, from New York to Seattle. and Trump’s derogatory comments and allegations that he has sexually assaulted women loomed large for Emily Rems, managing editor of Bust magazine. She carried a sign that read “Don’t Grab My Pussy,” referencing vulgar comments Trump made in a 2005 video published by The Washington Post in October.
In Manhattan, thousands converged on Union Square in a light rain and prepared to march uptown to the president-elect’s home at Trump Tower. Protesters hoisted signs like “Bad Hombre” and “Not My President,” and anti-Trump chants echoed through the crowd. Police made several arrests.San Francisco live on CNN showing thousands walking  in peaceful Protest against Trump’s election. Several  police units are following behind the protesters in case of any outward violence or destruction.At the same time, Anti-Trump protests are building  throughout the U.S. cities. In a center square  thousands of protesters meeting in one group in  San Francisco.
The streets of San Francisco are packed from sidewalk to sidewalk. Live Protests are  occurring in Portland Oregon, where protestors are  holding up traffic on the off-ramps to the city.  Philadelphia is having peaceful Protesters walking  the streets in numbers reaching the 100s. Chicago is having a protest that is growing quickly. All of these  protests are against Donald Trump and his campaign  promises to ban Islamic people, and other bigoted comments.Throughout each of these protests, two things are common, sidewalks and streets are being blocked and it is a protest against Donald Trump’s win during the election.
Tags: 2016 election Donald Trump Hillary Clinton