The Manifesto of Political Incorrectness 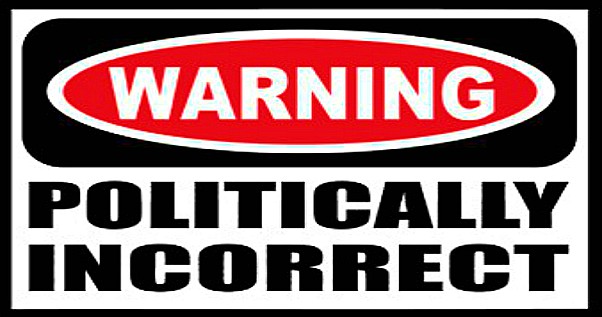 I refuse political self-censorship.  I’m not going to exchange information with other people in politically correct newspeak. War is a war, not a “kinetic action,” and not an “overseas contingency operation.” Moreover, “climate change” of the 2010s (which replaced the “global warming” of 1990s, which in turn, replaced the “global cooling” of 1970s) is as much nonsense as “time change.”

I refuse to consider the political processes in America from the standpoint of confrontation between the “red” and the “blue” forces. The red color was not chosen by conservatives. The Leftists assigned it to conservatives because this color traditionally denotes enemies. The Leftists chose a “blue” color, hinting that the conservatives are enemies of America. If you are talking about elections in terms of the “blue wave” or “red wave,” you are speaking in their newspeak, and thereby admit to their rectitude.

I refuse to admit that all world religions are equally peaceful. Moreover, I have every reason to assess that some beliefs are not a religion at all, in that they do not serve as a relationship between God and Man. These pseudo-religions use “religion” as a smokescreen that covers their plans for world domination through aggression, terrorism, violence, and propaganda.

I refuse to call the Leftists “liberals.” They usurped this term. The classical liberalism of the eighteenth century has nothing in common with the “liberals” of the 21st century, who are ordinary neo-Marxists. Real liberalism should be viewed from the man-state paradigm. Just as a religion is a relationship between God and Man, freedom is a relationship between Man and State. Liberalism is the supremacy of Man over the State (i.e., modern conservatism). It contradicts the fundamental dogma of the Leftists about the supremacy of the State over Man.

I refrain from politicizing those aspects of life that are not in the U.S. Constitution. For example, I’m tired of following political discussions about abortion. I recall that it was the movement of racist Leftist feminists, initiated by the likes of Margaret Sanger in the early 20th century, aiming at decreasing the birthrate of America’s black population that led to the politicization of abortion.

I refuse to call the Democratic Party of the United States “democratic.” In fact, this party from the right-wing party of the 19th century has long degenerated into a banal Leftist socialist party.

I refuse to respect the members of the former Democratic (now, Socialist) party of America. They, like all other socialist parties before them, transformed themselves into an incoherent conglomerate of marginal left groups united by the idea of victimhood, intolerance of dissent, and aggressive anti-Semitism.

I refuse to accept the methods of the Washington swamp, inherited from previous generations of Leftists. These tactics were previously intended to be used against only external enemies. Now surveillance, wiretapping, and human intelligence are practiced against the domestic political opposition.

I refuse to call the spies, implanted by the party of power into the campaign of the political opposition, referred to as “confidential human sources.” They are spies, that’s it. Moreover, those who sent them, not only created the most significant political scandal in the history of our republic but also trampled on the Constitution on an unprecedented scale.

I refuse to distinguish people by their skin color. Yes, humanity consists of several races. However, the citizens of America of all races should not only be extended the same rights; they must have the same responsibilities and the same privileges. Consequently, no one designated as an illegal U.S. resident should have any privileges on American soil.

I refuse to recognize the existence of the Palestinians. They are ordinary Arabs. These people, who never had their own language, their own culture, and their own country, were invented in the late 1960s by the Soviet KGB (until 1967 Jews were called Palestinians). They were among the first whom the KGB taught the tactics of political terror.

I refuse to obey the Leftist Google algorithm. This algorithm does not delete, but artificially pushes links to websites that are not suitable for Leftists beyond the first 100 search results. Google knows that more than 90% of Internet users are limiting themselves to the first 50 search results, and almost no one looks beyond the first 100 links. A striking correlation exists between the Google algorithm and Stalin’s methods, which evicted dissidents disliked by the Leftist regime to 100 kilometers from Moscow and other regional capitals of the USSR.

I refuse to control myself if a transgender woman with testicles attempts to enter the same public restroom as my wife.

Finally, I refuse any compromises, not only about the First Amendment, and also about the Second Amendment to the Constitution. No compromises – with no one and never. No confiscation of weapons from law-abiding citizens. “If the people are afraid of the government, this is tyranny. If the government is afraid of the people, this is freedom.” If you think that these words of John Barnhill, written in the distant 1914, are outdated, you are making a grave mistake. Perhaps this will be your last mistake. “We The People” were very serious about it in 1787, and we are very serious about it today. Deadly serious.