The Love-Hate Relationship Between the Ancient and the Infant 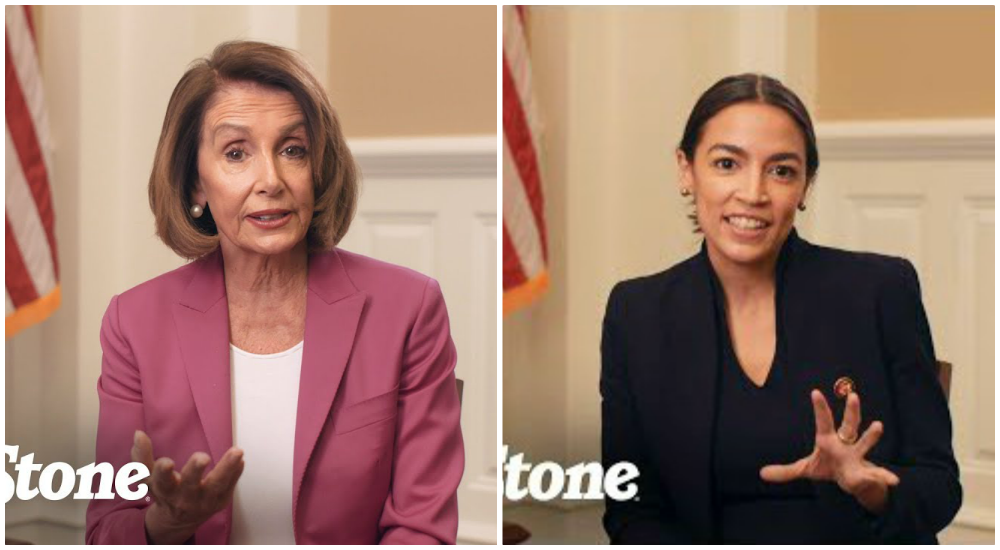 Nancy Pelosi and Alexandria Ocasio-Cortez (better known as AOC) have a relationship that is mostly hate, but they also pretend to love each other for the sake of “party unity.”

Pelosi has been in Congress for 37 years and is the highest-ranking woman ever to serve in Congress. Ocasio-Cortez has been in the House for five minutes. It’s a given that Nancy doesn’t appreciate all the attention being given to this upstart, and being pretty much ignored after becoming Speaker of the House again.

The know-nothing AOC on her very first day in Congress did a sit-in in Nancy Pelosi’s office. The purpose was to force Pelosi to create a new House Committee to make specific recommendations to combat “climate change.”

Pelosi was furious, according to people close to her, but she had to pretend to be impressed. “We are inspired by the energy and activism of the many young activists and advocates leading the way on the climate crisis, which threatens the health, economic security, and futures of all our communities.”

Pelosi did create a Climate Change committee but she made a point of not appointing AOC to it. Cortez claimed she turned Pelosi down for an appointment to the committee, even though she had pushed for the creation of the committee.

Let’s look at the differences between these two women:

Pelosi is a pragmatic Democrat. She’s a Socialist at heart, but she keeps it well-hidden because she knows most Americans (except for some mush-headed college students) are against it. AOC proudly proclaims that she is a Socialist Democrat. She says that unless we make drastic moves immediately, the world as we know it will end in twelve years.

Pelosi is used to the spotlight. She has always been the most visible woman in Congress. Suddenly she finds herself overshadowed by AOC. Wherever there’s a camera, you’ll find the bartender from the Bronx in front of it. Democrats begged for her endorsement – even before she took office. She is on TV every day. Nancy is sulking.

They both talk about “climate change” but Pelosi’s approach is to cut back on oil drilling and energy use. Ocasio-Cortez wants to eliminate airplanes, cars, and cows (yes, I said cows). Her objection to cows doesn’t stem from the fact that she’s a pescetarian (a vegetarian who eats fish – who knew?). No, it’s because she thinks cow farts are causing as much pollution as those pesky cars and airplanes.

Nancy is all for raising the minimum wage and more benefits for people on welfare. But radical Alexandria wants welfare for all. In her explanation of the Green New Deal, she called a “living wage,” family leave, paid vacations, and free college for everyone – including those who are unable or unwilling to work. (She moved the part about people getting paid to hang out at the pool hall and drink beer after a huge outcry. But lots of smart people took screenshots of it. You can run, but you can’t hide from your stupid words.)

There is an international Internet Archive that automatically saves pages from all websites for historical purposes. Here you can see AOC’s really wacky version of the Green New Deal before she was forced to take it down:  https://web.archive.org/web/20190207191119/https:/ocasio-cortez.house.gov/media/blog-posts/green-new-deal-faq

Almost every declared Democrat presidential candidate has endorsed Cortez’ Green New Deal – but they’re not supporting Pelosi. In fact, many Democrats promised they wouldn’t vote for Pelosi as Speaker during their campaigns. Typically the House leadership of whichever party is in power decides on who they want for Speaker. Then it goes to a floor vote and all of the members of the party in power vote “yea” and the other party votes “nay.”

In this case, 15 Democrats voted with the Republicans.  If just three more Democrats had voted against her, Pelosi would have lost – even though no one was running against her. She needed 217 votes – she squeaked by with 220. Just think what would have happened if a strong, well-liked Democrat had challenged her.

The reason this is important is that it shows that she is very weak in her own party. Other Democrats know she won’t be in Congress much longer, and they smell blood in the water. The last thing she needs is a young, fresh face throwing out crazy ideas that appeal to young Democrat voters. She’s the darling of the Democrats, the “new face of the Democrat Party.” So although she detests Ms. Cortez, she has to pretend to like her.

But politicians are sneaky, and Pelosi is far more devious than most. So she takes every opportunity to undercut AOC, without directly challenging her. Referring to Pelosi and the Green Deal, AOC claimed that “We are 100 percent in this together.” But when reporters asked Pelosi what she thought of the deal, she just said it was “enthusiastic.” That’s what Alexander Pope would call, “Damning with faint praise.”

Later, after she kept Cortez off the climate committee Pelosi told reporters she hadn’t even seen the plan. And she said the Green New Deal, which she referred to as “the green dream or whatever they call it,” would not get special consideration.

The House took a very interesting vote recently. It was a typical Liberal anti-gun bill. But at the last minute, Republicans introduced an amendment to the bill to add language instructing law enforcement officials to notify ICE if an “illegal immigrant” attempted to buy a gun. Twenty-six Democrats voted with Republicans in favor of that motion, infuriating Pelosi. She called a closed door, Democrats-only meeting and chastised the Democrats for voting with the Republicans. But Ocasio-Cortez took the spotlight again when she threatened the dissenters with getting on her “list.” She made it clear that she would campaign for more Liberal challengers to unseat them unless they got back in lock-step with the party.

So, in addition to taking the attention off her much more senior colleague, the infant legislator has dared to threaten fellow Democrats, usurping Pelosi’s leadership authority.

AOC and others like her are forcing the Democrat Party much further to the Left than Pelosi would like. But she has to pretend to go along to avoid being left behind.

I have the feeling that Pelosi would squash Alexandria Ocasio-Cortez like a bug if she thought she could get away with it. But for now, she just has to grin and bear it, as AOC takes on more and more power in the strange alternate reality known as Washington, D.C.