The Final Curtain for President Trump? 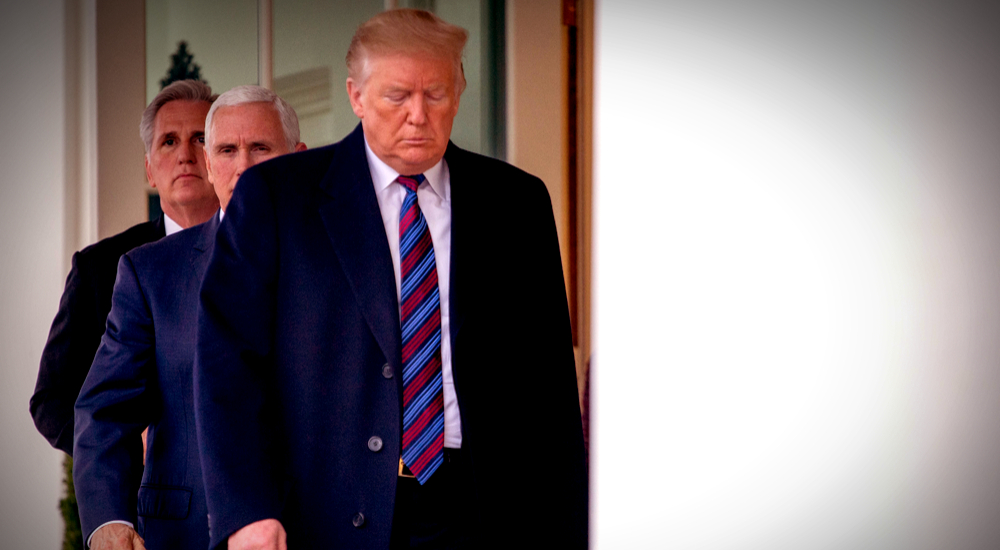 “And, behold, the veil of the temple was rent in twain from the top to the bottom; and the earth did quake, and the rocks rent; and the graves were opened; and many bodies of the saints which slept arose, and came out of the graves after his resurrection, and went into the holy city, and appeared unto many.” Matthew 27:51 KJV

During the lifetime of Jesus, the holy temple in Jerusalem was the center of Jewish religious life. The temple was the place where animal sacrifices were carried out and worship according to the Law of Moses was followed faithfully. Hebrews 9:1-9 tells us that in the temple a veil separated the Holy of Holies—the earthly dwelling place of God’s presence—from the rest of the temple where men dwelt. This signified that man was separated from God by sin (Isaiah 59:1-2). Only the high priest was permitted to pass beyond this veil once each year (Exodus 30:10; Hebrews 9:7) to enter into God’s presence for all of Israel and make atonement for their sins (Leviticus 16).

Solomon’s temple was 30 cubits high (1 Kings 6:2), but Herod had increased the height to 40 cubits, according to the writings of Josephus, a first-century Jewish historian. There is uncertainty as to the exact measurement of a cubit, but it is safe to assume that this veil was somewhere near 60 feet high. An early Jewish tradition says that the veil was about four inches thick, but the Bible does not confirm that measurement. The book of Exodus teaches that this thick veil was fashioned from blue, purple and scarlet material and fine twisted linen.

The size and thickness of the veil make the events occurring at the moment of Jesus’ death on the cross so much more momentous. “And when Jesus had cried out again in a loud voice, he gave up his spirit. At that moment the curtain of the temple was torn in two from top to bottom” (Matthew 27:50-51a).

So, what do we make of this? What significance does this torn veil have for us today? Above all, the tearing of the veil at the moment of Jesus’ death dramatically symbolized that His sacrifice, the shedding of His own blood, was a sufficient atonement for sins. It signified that now the way into the Holy of Holies was open for all people, for all time, both Jew and Gentile.

When Jesus died, the veil was torn, and God moved out of that place never again to dwell in a temple made with hands (Acts 17:24). God was through with that temple and its religious system, and the temple and Jerusalem were left “desolate” (destroyed by the Romans) in A.D. 70, just as Jesus prophesied in Luke 13:35. As long as the temple stood, it signified the continuation of the Old Covenant. Hebrews 9:8-9 refers to the age that was passing away as the new covenant was being established (Hebrews 8:13).

In a sense, the veil was symbolic of Christ Himself as the only way to the Father (John 14:6). This is indicated by the fact that the high priest had to enter the Holy of Holies through the veil. Now Christ is our superior High Priest, and as believers in His finished work, we partake of His better priesthood. We can now enter the Holy of Holies through Him. Hebrews 10:19-20 says, “we have the confidence to enter the Most Holy Place by the blood of Jesus by a new and living way opened for us through the curtain, that is, his body.” Here we see the image of Jesus’ flesh being torn for us just as He was tearing the veil for us.

As they assist with rebuilding the Temple, will President Trump and Jared Kushner put the highly significant curtain, the highly significant veil, back into place to deny the work of Christ?
Since the Jews, rebuilding the Temple today, deny Yeshua (Jesus Christ) was the Messiah, obviously, a new and untorn blasphemous curtain will be set in place. In doing this, the very real spirit of Antichrist will deny the veil was symbolic of Christ Himself and His finished work.

As with the other pro-Masonic moves Donald Trump has done – the most recent being the acknowledging of Christianity, Judaism, Islam, Hinduism and Sikhism as “ways to God” at the National Day of Prayer breakfast – Trump demonstrates his loyalty to the substance of the Divinely-prophesied one-world religion with its syncretistic Masonic mentality, to soon rule in the Jerusalem Temple that Trump will help build.

One can witness it here during the first 1 1/2 minutes of video.  Click here!

The Masonic-parroting Interfaith mindset will, in truth, result ultimately in disaster. Revelation 17 clearly shows the one-world leader, the Antichrist, will destroy this religious Babylon. Though he needed their Masonic unity to climb to power, once he has power, he’s not willing to share it with anyone and will then seek to destroy these world religions.

For centuries, the goal of Judeo-Masonry has been the rebuilding of the Temple. Members of Freemasonry of all world religions are not allowed to say theirs is the only way to God – though Jesus said, “I am the way, the truth, and the life: no man cometh unto the Father, but by me.” There is tremendous deception here as many Masonic Lodges use KJV Bibles, though they do not adhere to them in fundamentalist ways.

But be assured. President Trump and Jared Kushner will sanction the rebuilding of the Temple with a new and untorn veil. But before that mocking veil is set in place, millions of believers around the globe – who know the Temple curtain was torn from the top down with the death of Christ – will be Raptured (as fake news will say, in typically ludicrous fake-news fashion, they were abducted by aliens).

Spiritually it will be the Final Curtain for Trump and Kushner. To deny worldwide the finished work of Christ by reconstructing the temple of the Old Testament with an untorn curtain, Trump and Kushner will be remembered as 21st-century Judases, who delighted in assisting the Antichrist by proclaiming all world religions are ways to God. A new Temple veil is just fine with them, to their eternal peril…