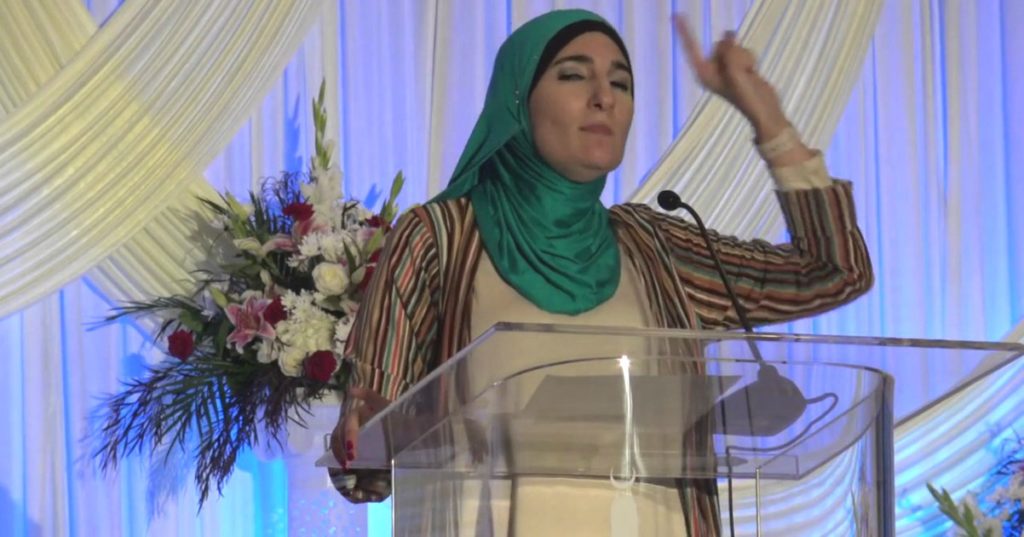 If one needed a convincing example of the damage done to the female psyche by a strict Islamic upbringing, look no farther than to Linda Sarsour.

The treatment of women is brutally degrading within Islam; they are raped and harassed daily, and “not worthy of protection.” Traditional gender roles provide that men are superior to women and the female is responsible for the family’s honor; hence, they must be obedient to the many prohibitions or punished – even murdered.

Islam should be considered a shame-honor religion as Arab and Muslim cultures are shame-honor cultures that provide a means of manipulation and control by the family or group.  It allows for no creativity and no autonomy.  When shame becomes a destructive force, it leads the victimized family member to seek revenge and spill blood.  It is brought by the families who migrate to the West, and further exacerbated if they observe traditional rigid regulations of surveillance, a key concept that leads to tension and crippling development.

The daughter (and the son up to age 7) spends her time with the devalued mother who was herself a deprived, distressed child who grew into a troubled adulthood, unable to nurture healthy children.  The girls especially do not develop independently but understand that they are like their mother and any other women who serve as wives to the authoritarian male head of household. The women live in dread of losing favor, of being beaten, abused, kept naked in isolation, or even annihilated. If the husband divorces her, by simply repeating the divorce mantra thrice, she is left with only the dowry provided by her parents at the time of her arranged marriage.

The child is injured by their strict sharia laws, and by the disharmony, rivalry and envy that exist within the Islamic household, not to mention the fear and anger caused by the intense political hatred found in the Koran and repeated in their prayers five times daily. The pre-adolescent girl is further traumatized and degraded by the physically and psychologically painful Female Genital Mutilation (FGM) that is performed on her without anesthesia, under non-medical conditions, that may well cause lifelong infection.

Children living under circumstances of neglect, abuse, and trauma grow up with defective bonding relations and stay forever connected to the mother, in a painful traumatic bonding or terror bonding. When the daughter is ultimately given in marriage to a man of any age, not of her choosing, she is programmed to replicate the life of her devalued mother.

A young Muslim in Gaza or Judea and Samaria (West Bank) would have experienced enough shame to be overwhelmed by rage and aggression, resulting in never developing empathy with others.  They are treated as objects from an early age and, thus, treat as mere objects real people with real needs.  Boys who are radicalized at an early age bond violently and aggressively to females, including to the mother; girls internalize that same male rage, also directing it against the female and eventually become pawns of male extremist groups.

So now we have Linda Sarsour, the oldest of seven children born to a Muslim family from Gaza and living among people of the same background in Brooklyn, New York.  She promotes herself by championing “cool issues,” but seeks leadership roles to promote Islam and Palestinian self-determination. She professes to stand for the feminist movement, but rejects all who support Israel and silences any who speak of Islam’s severe cruelty to women.

She spoke briefly of her ties to her mother when she said she had to attend the local school, her mother’s choice. No doubt, her spare time was spent assisting with the care of her six younger siblings at the expense of a typical American childhood, thus denied the opportunity to play and work through fantasy life.

Steeped in the Islamic ideology and the Palestinian narrative, Sarsour endured FGM and shuts down all who criticize the practice. She was limited to meeting young men and women of her own heritage and shared mentality and chose the hijab for further identification.  Given in marriage at age 17 to her parents’ preference, she bore three children by the time she was in her early twenties. Where she is duty-bound to repress her anger against her family about her own personal abuse, she directs her rage outwardly against Americans, women, and the President of the United States.

She joined several Muslim organizations and labeled herself a “radical activist,” that is, a civilizational jihadist, an Islamic supremacist who, through multicultural coalitions, seeks to curry the favor of the public to accept Islam. She has joined rallies of Nation of Islam, Black Lives Matter and, more recently, the Women’s March. She is deeply involved with community, may seek a City Council candidacy and ponder the idea of mayor of New York City.

Islam is democracy’s sworn enemy because their belief system, their raison d’etre, is based on envy and hatred. The Koran contains 109 versus that decree war with Jews and Christians, commands all manner of torture and extermination, and warns that non-fighters for Allah will go to hell, because Mohammed was offended when the Jews rejected his religion. One of many such commands is “Fight against those to whom the Scriptures were given. 9:29”

A subtle proponent of the prescribed terrorism, Sarsour is a jihadi.  Pew Research estimates that 330 million Muslims believe in violent jihad, a number that exceeds that of the Nazis. Although not trained in armed warfare, Sarsour conducts her own war with lies and propaganda, and her cries of Palestinian injustice and suffering through social media and the Women’s March. She bears a strong odium for Israel, and was proud to share a stage with a convicted terrorist murder of two Jewish university students.

As she thwarts all comments about women’s oppression under Islam, she extols the benefits of FGM, by explaining it as a mere “cut.”  And it is here that we find her not trying to free her oppressed female co-religionists, but sanctioning their position of submission, their bondage, and the pathology of her severe jihadi hatred of women. She warns American Muslims not to assimilate. Of Brigitte Gabriel, Sarsour tweeted, “I wish I could take their (female sexual organs) away; they don’t deserve to be women.”  Of Ayaan Hirsi Ali she tweeted, “Brigitte Gabriel= Ayaan Hirsi Ali. She’s asking 4 an a$$ whippin’. I wish I could take their vaginas away – they don’t deserve to be women.”

Sarsour is pathologically fused to, dependent on, and smothered by her mother.  While male jihadists attempt to cleanse and release themselves from the maternal bond by killing others, she has exposed a similar malignancy in her desire for bloody violence against her despised enemies, which include all women, Israel, and President Donald Trump. Unable or unwilling to join the physical war, she will continue seeking to inveigle the public through her multicultural activism, spewing hatred and finding her own path of perpetual rage as she works to make the misogynist sharia law, Islamic violence and destruction, legally part of our American way of life.

On Holocaust Remembrance Day: Never Again Is Being Forgotten Due To Silence
January 27th, 2021 The Lid