The “F” Word that Democrats Love 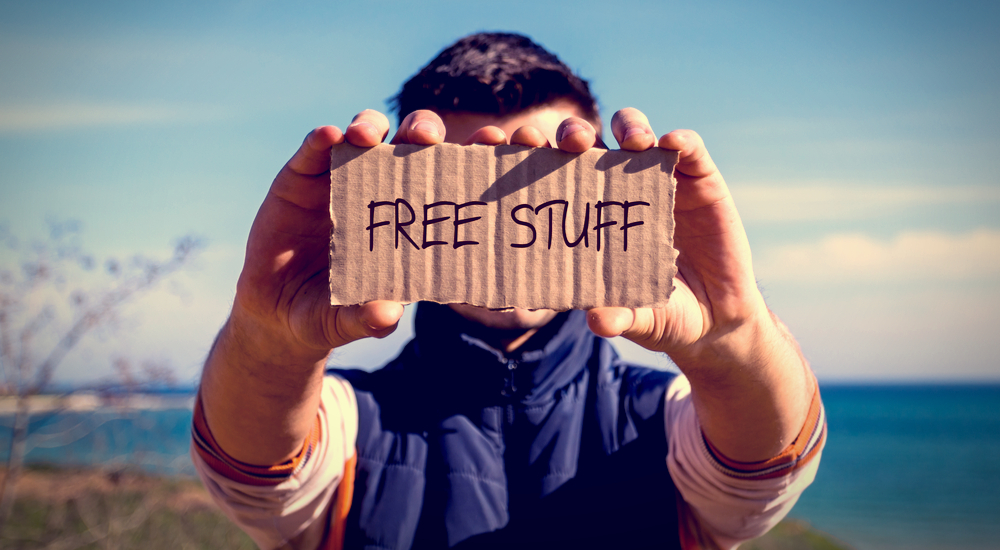 Wow! There’s something for everyone in the Democrat’s bribery plan to buy votes and steal the 2020 election. Everyone, that is, except for those of us who pay taxes and have to pay for it all.

Right now, roughly half of Americans pay all the taxes that support the other half. If we get a Democrat president in 2020, and he or she keeps all their promises for free stuff, a far greater number will pay no taxes, and the burden of paying for the Socialism will fall on far fewer taxpayers. And then, at some point, it will all be over. We will become Venezuela, and some other nation – probably China – will become the leading economic power in the world.

Our children and grandchildren will ask us, “Tell us the story again about when America was a great and prosperous nation that helped poor nations and kept dictators from taking over the world.”

This is a short list of the freebies that the Democrats have promised their voters. Most of the figures come from studies done either by non-partisan or left-leaning organizations in order to be as fair as possible. Figures from Conservative groups are much higher than those given here. Some items overlap, so you can’t simply add them up. But if some version of all of these become law, America as we know it will be over.

$93.0 Trillion Universal Guaranteed Income
$32.6 Trillion for Medicare for All
$20.4 Trillion for Guaranteed salaries for everyone, including those who “can’t or don’t want to” work
$  5.5 Trillion to raise the minimum wage to $15; this doesn’t account for trillions in job training
$  2.0 Trillion for Free Universal College or University, including wealthy families (no means testing)
$  1.4 Trillion initially to cancel all student loans, plus another $1.25 Trillion over the next ten years
$760.0 Billion for Rent Subsidies – Even for families making up to $125,000
$445.0 Billion Affordable Housing
$100.0 Billion for “Reparations” to descendants of slaves
$  30.0 Billion “Freedom Dividend” – $1,000 per month check to every American over 18
$    4.5 Billion “Democracy Money” – $600 for every American to give to politicians
$    4.5 Billion for Universal Child Care

We need to pay special attention to the so-called “Medicare for All.” The name is totally false since this will bear little resemblance to the current Medicare program. They use the word Medicare because the program is popular. But it will cost much more than the current  Medicare program in which retirees pay for roughly 20% of the costs – either as co-pays or as a supplement to eliminate co-pays. Medicare for All would eliminate any payments by its recipients, would extend to tens of millions more people – regardless of age or need, and would cover prescription drugs – which even those with the supplemental plans pay for partially by way of co-pays. It would cost the jobs of millions of people who work in health insurance and would decimate that industry.  As Charles Blahous,  a former trustee of the Medicare system, points out, even doubling U.S. tax rates wouldn’t cover the program’s costs.

Most important, it would put the government totally in charge of all health care decisions. They don’t even bother to lie like Obama did and tell you-you can keep your doctor or insurance plan. They will tell you who your doctor will be. If he is from Pakistan and doesn’t speak understandable English, too bad. If you need a transplant, but they decide you are too old, start planning your funeral. If your daughter gets pregnant, you won’t even know about it until after they have aborted your grandchild. The worst part will be the rationing of health care and the delays that will kill millions. I have personally spoken to Canadians who have said, “Don’t ever allow government-run health care. If you do, we won’t have anywhere to go when our government tells us we have to wait six months for life-saving treatment.”

Fulfilling the Democrats’ pipe dream would mean dropping the 8.8 percent uninsured rate to zero and lumping the 155 million Americans who are insured through employer plans with 20 million who have coverage through the individual market, 60 million current Medicare beneficiaries, and tens of millions now without insurance. The Democrats don’t care that half of America has health insurance through their jobs that most of them like. And they don’t account for the fact that many of the uninsured don’t want or need health insurance. If they decide to self-insure through savings or otherwise, the government will still force them onto the Socialist plan. The costs, according to both liberal and conservative economists, would be staggering.

No studies have been done on some of the other outrageous plans proposed or endorsed by most of the 22 Democrat 2020 contenders. These include trillions of dollars in infrastructure spending, including rebuilding our entire electric grid. The “Green New Deal would require that every house and commercial building in the United States either be torn down and rebuilt according to an approved “green” standard or remodeled to attain that standard – which would probably be more expensive.  It would also rid the United States of cows and other animals that (to put it politely) “pass gas.” This would be necessary to lower greenhouse gas emissions. (Better load up on hamburgers now while they’re still legal. Better yet, become a vegan.) Plus, the Green New Deal calls for an economic effort to combat “climate change” as dramatic as the mobilization for the Second World War – and costing FAR more.

Robert O’Rourke wants to give away all the stuff his opponents want – plus our national sovereignty. He wants border reform based on “respect and dignity.” That’s Socialist-speak for let all illegals in. He has no plan for how to pay for their housing, food, education or health care. Those are all unimportant details, apparently. Sen. Elizabeth Warren wants to cancel $640 billion in student loans owed to banks but guaranteed by the government. If she gets away with it, you and I – the few taxpayers who don’t flee the country to avoid the monstrous tax bills the Democrats will present – will have to pay for the education of our own kids – plus the millions of others who knowingly took out student loans, but just don’t feel like paying their debts.

Of course, they all want to cancel President Trump’s tax cuts, which are driving the greatest economy we have seen in decades. But raising our taxes back up to Obama levels, and even doubling that won’t pay for all their promised giveaways.

Cheryl Chumley in the Washington Times says the Democrats are in a race to the bottom of the political food chain. And it’s pulling America ever farther left – ever farther away from the founding principles that made America exceptional.

“They are on a fast-track sprint to see who can offer the most lavish taxpayer gifts – and while somewhat humorous, alternately outrageous, the fact is, if ever realized, these giveaways would completely devastate the American economy. Not to mention the American drive and ambition to create and produce. Why work when others will pay the bills?”

Most of the plans to pay for all these giveaways are clearly the result of magical thinking. For instance, the Sanders plan absurdly assumes that health-care providers would be willing to cut their charges by 40 percent! Also, Medicare is currently tens of trillions of dollars in the red, which suggests that prospects for savings should be taken with a large grain of salt. And many European national health-care systems, such as those in Norway, Sweden, and the U.K., have actually seen health-care costs increase at a faster rate than the U.S. since 2000.
Economists have long noted that increased federal college assistance largely encourages universities to increase tuitions, setting up a vicious cycle of increased aid followed by more tuition hikes.

As things stand now, 75 million jobs are projected to disappear as automation replaces people by 2023. Raising the minimum wage to $15 would simply hasten the process of automation. The increased availability of high-paying government jobs would force private employers to raise wages, which would drive up labor costs and bankrupt small businesses. Between the taxes to pay for government jobs and the impact on labor costs, numerous studies have concluded that government jobs programs will destroy far more jobs than they produce.

Taking all of these proposals together, Democrats would increase federal spending by around $42.5 trillion over the next ten years. If the current federal income and spending stay the same, the government will take in approximately $3.3 trillion in taxes this year and spend $4.1 trillion. That means the “baseline deficit” (the extra money added to our current $22 Trillion National Debt) and a conservative total of new Democrat spending would total $54.9 Trillion.

To put that into perspective, Washington is projected to collect $44 Trillion in revenues in the next ten years – if the Democrats don’t reverse the Trump tax cuts. But if they do, they will only increase revenues by $2 Trillion in the next ten years. Democrats have universally maligned the cuts as “irresponsible,” and Nancy Pelosi refers to them as “Armageddon.” Yet they amount to just 4.7% of the proposed free money the Democrat 2020 candidates want to give away.

If we project out 30 years, the costs for these new programs is absolutely staggering. The new proposals would cost $218 Trillion, added to the deficit of $84 Trillion, and totaling $302 Trillion. Friends, the total net worth of the United States – including all personal wealth, local, state and federal assets, and every building and park in the nation – is only about $100 Trillion.

If we add in local and state government spending we would be at 60% of GDP. This would be greater than the spending of every European nation. Only American voters can save us from this calamity, by re-electing President Donald Trump.

As humorist P. J. O’Rourke has said, “If you think health care is expensive now, just wait until it’s free.” The same is true of all the other “free” things the Democrats have promised.