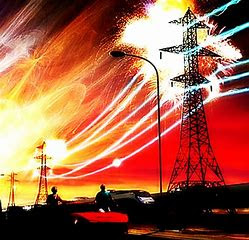 One of the great panic pushing possibilities promoted by the bureau building denizens of the Deep Swamp is the threat of an EMP event caused by a single North Korean thermonuclear  bomb exploded in space over Kansas with the objective of shutting off the electric grid systems that power America while crippling every computer, cell phone, television and appliance from sea to shining sea in America.  Can it be? 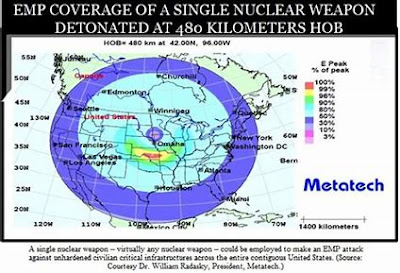 Apocalypse prognosticators produce every kind of dystopian vision of an EMP aftermath, but no one has shown a demonstration of these effects in a time when we have seen the sciences twisted in schemes like anthropogenic global warming, organic water, Gafilta fish and miracle drugs at outrageous prices.  What is the truth of the matter?  Science says something else: 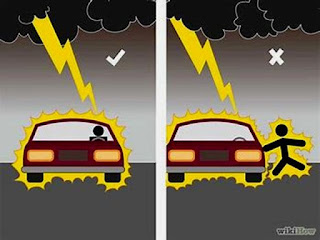 Lightning is an EMP event that happens frequently over America and the key to understanding the phenomenon is relating it to a lightning strike on an automobile.  A person inside will be totally unaffected while anyone standing near or touching the vehicle may be killed by the strike.  This happens as high voltage or energy currents run on surfaces rather than within the atomic matrix of metal as it is faster than running through the mass even though 99% of it is empty space at the atomic level.

There are three kinds of radiation in an EMP pulse depending on the source.  The natural, solar generated version is essentially “gamma” radiation consisting of free electrons generated by the sun.  Early nuclear bombs generated a lot of this kind of radiation, but newer, more efficient thermonuclear “H” bombs do not.  This class of EMP radiation is labeled “E1.”

“E2” is of free neutrons that generate E1 electrons on collision with solid matter.  It is really secondary and with less energy than E1.

“E3” is the final, slow pulse electron energy.  It is most effective and dangerous for power grids, but all of these impulses can be shielded by “Faraday cages” named after Sir Michael Farady the 19th century physicist who discovered all such radiation is shielded by metal containers.

In 1836 physicist Michael Faraday invented “The Faraday Cage” which was a metal box that would protect any electrical device by conducting errant electric currents around the contents.  Electric waves have an “easiest path” preference to the point that we can defend anything from an EMP event with a simple metal enclosure.

You can test the functionality of an enclosure with a small battery powered AM radio.  Have it on a local station and stick it in the box. If the sound drops greatly or vanishes you have a functional Faraday Cage.  You can convert any plastic cased unit to a Farady caged device with an aluminum foil wrap.  Open ends are generally OK, but the best of these devices covers completely, like an automobile.

The large electric transformers seen on poles and massive units in power stations are all fully enclosed in metal cases and equally safe.  An automobile would appear to be an exception as one in operation when an EMP pulse hits may stop and have to be restarted, but that is due to very sensitive computerized controls that only need to be restarted. This is an infrequent case and one of no consequence.  Restart the motor and all is well.

Home appliances with metal cases like microwave ovens and home computers, automobiles and metal garbage cans are “Farady cages” by design. All electric power transformers, dynamos and motors are in what will function as a “Faraday Cage and protect the equipment much as a metal automobile bodies protect them from lightning strikes.  Same story for aircraft which are routinely struck by lightning with no damage, but a short “hiccup” in instrumentation.  The pilots know what is happening, but the passengers do not.

The greatest EMP event in nature is a lightning strike. On any summer night over our central states there are hundreds of EMP events exceeding the energy of 100 atomic bombs, but nothing happens.  This fact alone puts the lie to the apocalyptic prognostications by grant, bureau and power seeking Physics PhDs.  We live in an era when science has become politicized, monitized and corrupted by the Dark State, but the truth is here at hand on the EMP question.