The Electoral College Must Remain 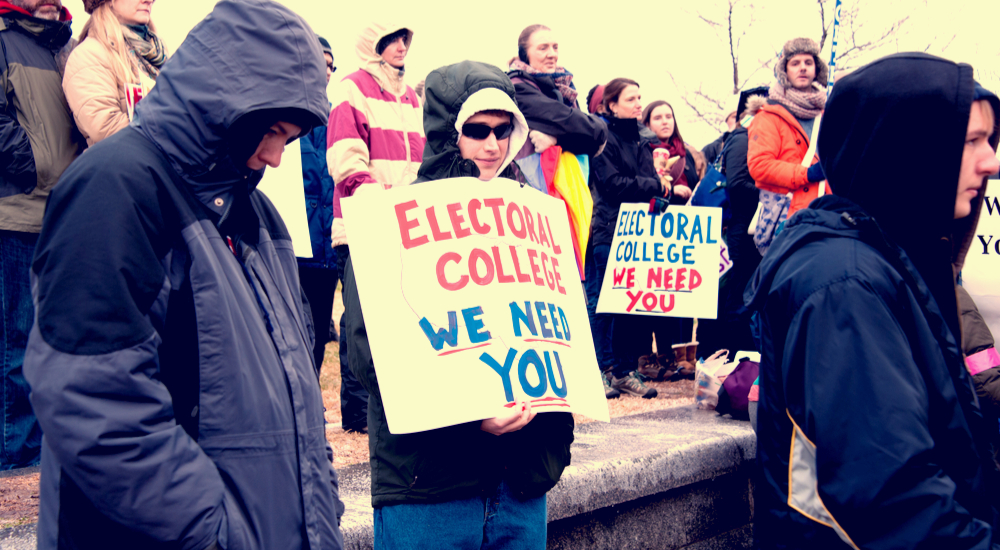 It takes 270 electoral votes to win the election, meaning a minimum of 11 states. If elected by popular vote, the large states would control our government. Large states and cities would be the only areas that candidates would campaign in because those are the only votes that matter. States such as Nevada, New Hampshire, Iowa North, and South Dakota would be ignored by the candidates because their votes would not be enough to matter under the popular vote. It must be acknowledged that the policies for Iowa and North Dakota are vastly different than the concerns of New York and California.  The larger urban areas (Los Angeles, New York, Chicago) tend to vote for candidates who are for larger government and less personal responsibility.

Hans von Spakovsky, one of the legal experts at the Heritage Foundation summed it up this way:

“In creating the basic architecture of the American government, the Founders struggled to satisfy each state’s demand for greater representation while attempting to balance popular sovereignty against the risk posed to the minority by majoritarian rule.”

Our nation at the time, contrary to what the progressive socialists would have you believe, was not the nation that we have today. The individual states were adamant in holding on to the rights and powers granted to them in the Constitution. The Electoral College is the protection of both individual rights and majority rule, a “federalist system” that would keep policymaking power reserves for the states and local government. It was never the intention of those states to allow the national government to usurp those prerogatives. The national campaigns and wall to wall coverage and propaganda that course along our airwaves was never considered because they were never known. A point not discussed now is that the settlers who formed this union never considered the formation of national parties.

There were a great many ideas put forward about how to elect our President in the beginning. One was to have Congress choose the President. This idea was rejected because it was thought that it would lead to corruption and was a process that would be found to be divisive. Another was to let the State legislatures select our President. This was dismissed on the grounds that the President would too beholden to the States that selected him. A third discussion was on the concept of the “popular vote”. This was dismissed because of the trait of “popular son” voting for an individual from each state leading to a failure to gain a popular majority. The larger states at that time, as now, would have elected their “favorite son” without any regard of what the other states may need and want.

With the advent of political parties in the 1800s slight changes were made to the 12th Amendment. These political parties changed the loyalties of the citizens from state to political affiliations. Even at this time, the “popular vote” was never considered. Perhaps this was based on the excesses that lead to the French Revolution, and the rapid fall to dictatorship. It was agreed by all involved that too direct a democracy would do the same to the United States.

It must be kept in mind that our country is a constitutional republic and not a democracy. In a democracy, it would be legal to put someone else’s inalienable right to a  popular vote and erode the liberty of others. Our country was developed as a constitutional republic to assure that everyone’s inalienable rights would be secure, something that cannot be guaranteed under a “democracy.” The process of electing our President was never meant to be democratic. The popular vote played no role in choosing our President until 1820 with the election of Andrew Jackson. The Electoral College was formulated to insulate the government from mob rule.

American citizens at the founding held the belief that the government on the national level was there to protect our liberties, rather than try to curtail them as it does now. The federal government was limited in scope as found the founding documents.  As a constitutional republic, public policy would not and should not be made by the demands of its citizens but according to the rule of law. The Electoral College and those that formed it over the years understood that the will of the majority could be just as tyrannical as those who fomented the French Revolution.

The use of the popular vote would bring a multitude of single-issue candidates- pro-abortion and anti-abortion, pro-immigrant and anti-immigrant pro-gun and anti-gun and various other single issues. It would be impossible to get a majority for any one candidate, throwing our elections into chaos. It is possible that we would end up with a President elected with only 20% of the popular vote.

The National Popular vote movement refuses to understand the basis for the Electoral College, or are willfully ignorant of why it exists. Dissolution of the Electoral College takes the independence and voice of those in smaller states away from the people in those states. It makes the smaller states irrelevant and provides for the President to judge what those in population centers in the states approve of. There would be no reason to make policy based on what ALL of America would like. A popular vote would do nothing more than assign a vast number of voters to be nothing more than spectators in the policies that this country would make. That scenario is not what our Founders envisioned, and must not be allowed to be considered.

John Veliseks’ new book “One Patriots Opinion- for the Forgotten Men and Women of America” is now available on Kindle/Nook. Patriots! It is time to fight back.