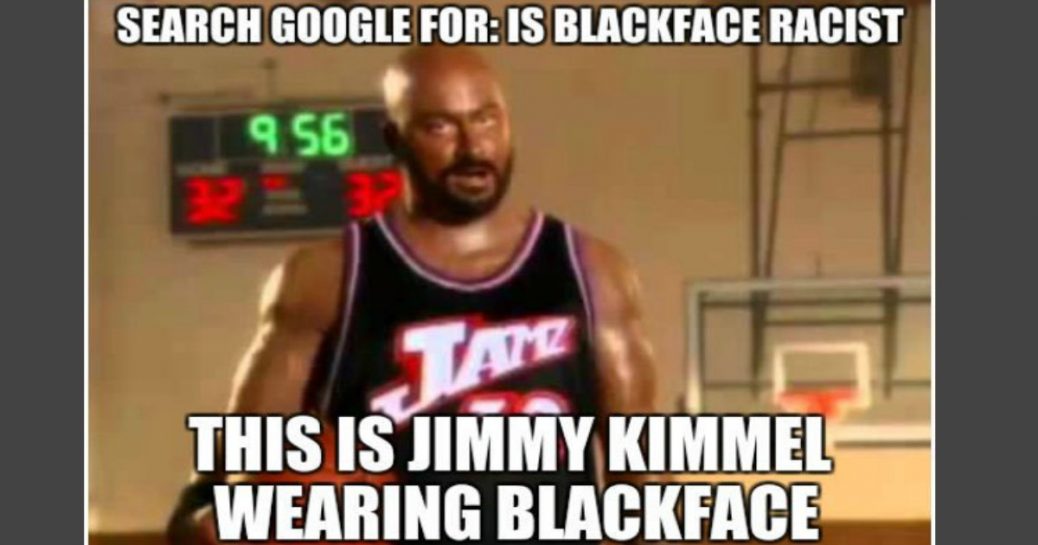 Again, we see the double standard of the left.  Things that they do all the time they lambaste the conservatives for doing.  Of course, I’m referring to the most recent inappropriate Tweet by Roseanne Barr.  Her tweet was off color and should not have been put into the public arena but just how is it worse than Jimmy Kimmel making fun of Karl Malone complete with painting his face black:  We’ve highlighted some of Kimmel’s other cringe-inducing antics before, but on this occasion, we’d like to point out yet another skit — this one done in blackface — which he’s never been held to account for.

The skit involved Karl Malone, then a player for the NBA’s Utah Jazz.

Malone was known to speak his mind on a number of subjects, often without a filter, and that provided the media with a but of humor.

However, this bizarre sketch involving Malone and what he believes about aliens — and namely, where they probe — goes a bit too far in mocking not only Malone but also his manner of speaking in a way that could very obviously be considered racist.

Has Kimmel apologized for it, though? Of course not, even though it’s minstrelsy through and through. 1 Or how about when he mocked Melania’s accent: “On Monday night, left-wing host Jimmy Kimmel showed his true bigotry by mocking the way our First Lady was reading a children’s book during the annual Easter Egg Roll at the White House,” the petition said. “In the past he has claimed to be loving and accepting of all immigrants, but he openly made fun of her accent and his crowd laughed along. He even reenacted the way she says ‘This and That.'”

“Let’s send a message that these attacks on our First Lady will NOT be tolerated!” 2

Then we have liberals nitwits on The View talking about things they know absolutely nothing about, Christianity. One of the co-hosts of ABC’s “The View” who regularly calls for tolerance is being blasted for her intolerant rant criticizing Vice President Mike Pence’s Christian faith.

Behar: “It’s one thing to talk to Jesus. It’s another thing when Jesus talks to you. That’s called mental illness, if I’m not correct. Hearing voices. My question is: Can he talk to Mary Magdalene without his wife in the room?”

That last quip is in reference to the vice president’s explanation last year that out of respect for his marriage and his wife – and out of a desire to remain above reproach – he doesn’t dine with women alone or attend functions without his wife if alcohol is being served. 3

Keith Olbermann, the “new” face of the Democratic resistance on Conde Nast’s digital video platform, is the same old foul-mouthed beast he was on cable TV.

Over the weekend, the former MSNBC frother went berserk over Trump Education Secretary Betsy DeVos’ anodyne call for prayers “for all those in the path of #HurricaneHarvey” and her promise to “assist impacted schools.”

“The hurricane is going to do less damage to schools than you are, Motherf—er,” Olbermann snarled in response (and no, he did not use dashes in his unfiltered, uncensored tweet). 4

Wanda Sykes is another foul mouth fool who is full of insultes but can’t take what she dishes out: A stand-up comedy charity event in Boston on Saturday turned ugly when Wanda Sykes responded to boos prompted by her criticism of Donald Trump with expletives and foul gestures.

Sykes was met with jeers from the thousands in attendance at Boston’s TD Garden arena when she unloaded on the President-elect, theBoston Globe reported.

‘I am certain this is not the first time we’ve elected a racist, sexist, homophobic president,’ the comedian told the crowd. ‘He’s just the first confirmed one, that’s it.’

Sykes also went on to call Trump ‘an orangutan.’

The comments elicited boos from the audience, which prompted Sykes to go on the defensive and respond with a middle finger.

She also told those in attendance jeering her to ‘f*** off.’

Farrakhan went on to claim that white men had squandered the time God gave them to rule, alleging that they had chosen not to rule with righteousness, truth, justice, or fairness.

Farrakhan’s message included a list of traits that he believed were “in the white man’s nature” — namely murder and dishonesty — and he added that while white people were slaves to their natures, what black people do “is by learning from your master.”

Farrakhan also raised eyebrows earlier this week when he said President Donald Trump “is destroying every enemy that was an enemy of our rise.” 6

Then, of course, is Kathy Griffin and the severed trump head.  She was the only one that suffered anything for what she did, not enough because she still has some form of employment.  But all the rest of these liberal hacks are still gainfully employed, all should have been fired like Roseanne was.  Her ‘mistake’ is no worse than what the liberals did.  Why does the American public put up with this? Why do we put up with trash from one side but not the other?  One part of our society, liberals, is so desensitized that anything they do is tolerated but the same actions by others are deemed unacceptable.  How long can we stand as a great nation if we continue?  Not long.