The Destruction of Citizen Cain 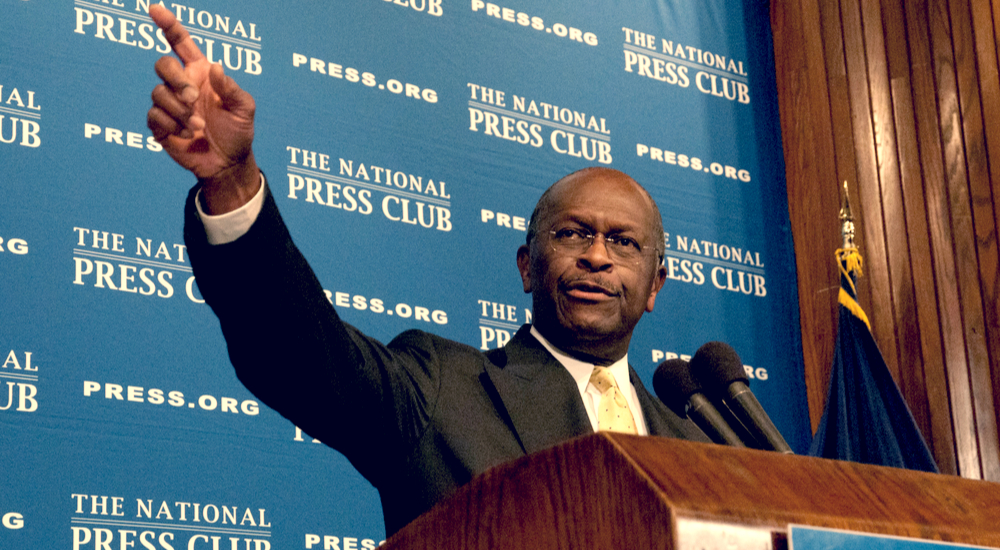 The Destruction of Citizen Cain

In 2016, black businessman extraordinaire, Herman Cain terminated his run for the presidency due to allegations of sexual misconduct. Cain chose to protect his family from the humiliation of enduring leftists’ attempt to destroy a black conservative Republican.

It is unfortunate that negative press was many black Americans’ national introduction to Herman Cain. When Cain dropped out of the presidential race, his accusers magically disappeared. Now that Trump has chosen Cain for the Federal Reserve Board, the allegations have resurfaced to block his appointment.

Folks, we can not continue allowing leftists to hypocritically use this tactic to disqualify good people. When President Bill Clinton was committing adultery by receiving oral sex and using cigars as sex toys with an 18-year-old intern in the White House, Democrats and fake news media said, “So what? That is Clinton’s private life which is none of our business.” In response to credible women accusing Clinton of sexual abuse including rape https://bit.ly/2QJIyPN , leftists branded the women trailer-trash sluts and liars. Let us not forget the Bimbo Eruption Squad headed by Hillary Clinton purposed to destroy all the women who might go public with their sexual misconduct encounters with Bill Clinton. https://bit.ly/2D5uuLg

To minimize president Clinton’s serial sexual misconduct, Democrats and fake news media claimed any man in Clinton’s position would behave the same way he did; receiving oral sex and so on. Fake news media and Democrat late-night TV comics destroyed Ken Starr who was assigned to investigate Clinton’s lies and sexual misconduct. Starr was branded a sex-obsessed pervert.

Hypocritically, Democrats and fake news media are claiming Herman Cain is unfit for the Federal Reserve based on unsubstantiated allegations which pale in comparison to those against their beloved president Clinton.

Clearly, there is a double standard. Democrats are permitted to live lives of debauchery. Republicans must live saintly lives or be deemed unfit for public service by fake news media. Remember fake news medias’ absurd narrative that Republican Mitt Romney was unfit to be president because he may have bullied a fellow student in high school?

In truth, none of us have lived perfect lives. The Bible says, “For all have sinned and fall short of the glory of God.” But praise God, people can and do change. Moses murdered a man. King David murdered a man and stole his wife. After paying dearly for their sin (crimes), Moses and David changed. Rahab was a prostitute who changed. Moses, David and Rahab were used mightily by God.

Fake news media and Democrats pretending to be concerned about women is extremely repulsive. They seek to exploit women the same way they exploit blacks to further their socialist, progressive, anti-Christian and anti-American agendas.

For example, women pay a huge longtime devastating emotional and physical price for abortions. https://bit.ly/2YYQYa2 And yet, Democrats danced in celebration over passing a new law to abort babies on their date of birth. Shockingly evil, Democrats are seeking to legalize murdering babies even after they are born. https://bit.ly/2U6X9u9 Is this the behavior of a political party that champions women?

Sharia Law abuses and suppresses women. It condones beatings, honor-killings, and rape in certain circumstances. https://bit.ly/2D2Fn0u So, why are Democrats aggressively pushing Sharia Law in America?

My wife Mary watches the TV show, “Counting On” which features the Duggar family. I caught the Duggars’ wedding. I was immediately struck by the overwhelming respect for the young bride shown by her father, her groom and every man at the wedding. She was a princess, presented to her husband as a precious gift from God to be loved, honored and cherished. Such wholesomeness is anathema to Democrats and fake news media; repulsive as showing Dracula the cross.

Democrats and fake news media seek to destroy all successful blacks with a platform to instruct black youths; stop blaming whitey, get an education, work hard, make right choices and you can achieve your American dreams. America is the greatest land of opportunity on the planet for all who choose to go for their dreams. Period.

Herman Cain’s extraordinary success proves that the American Dream is available to all Americans; dismantling Democrats’ and fake news medias’ lie that white America schemes 24/7 to keep blacks down. Cain was elected CEO of the National Restaurant Association because he is excellent, rather than a racist leftist mindset of putting the-poor-inferior-black-guy in charge.

Herman Cain on the Federal Reserve would dispel the lie that Trump is racist. Cain would inspire black youths to thrive for excellence rather than affirmative action and government forcing standards to be lowered. My late dad won “Firefighter of the Year” two times in the 1950s without any special concessions or lowered standards because he was black.

Democrats and fake news media have decreed that Herman Cain is an uppity negro who must be taken down, his black derriere wrestled back to their Liberalism Plantation where he belongs.