The Desperation and Danger of Bogus Hate Crimes 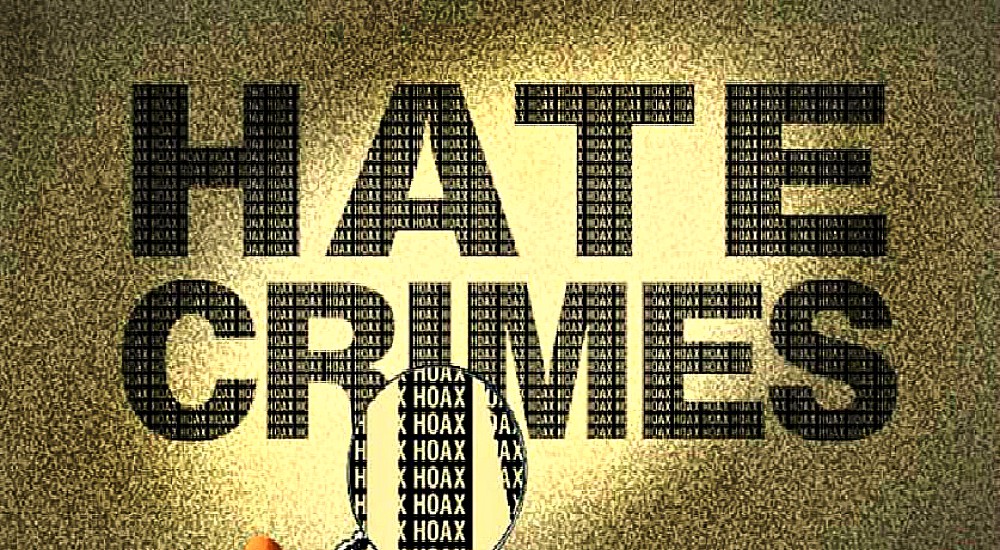 The Russian writer Anton Chekhov wrote, “Love, friendship, respect, will never unite a people as much as a common hatred for something” (or someone). The elevation of Donald Trump to the presidency has exacerbated the intemperance of an already divided American people, politically, racially and socially. It has caused tremendous frustration, bitterness, and anger among the presidents detractors.

In this discordant climate of instability, those on the political and cultural Left are united in their fervor and frustration and have erupted in the most reckless, violent and at times dangerous behavior. Most of their activities usually take the form of demonstrations, protests, or attacks on people who represent different ideological beliefs and political persuasions. Since Mr. Trump took office, however, there has been a substantial increase in another dynamic that has been festering among these confused and desperate souls on the Left; I speak of orchestrated hate crimes.

Hate crimes are nothing new, and when legitimate should be punished to the full extent of the law.  However, there has been a marked increase over the last two years of bogus hate crimes that have now finally come to head with a recent event that activated the precepts and obsessions of the cultural Left. This one case was the epitome of these desperate constructs and reached across the entire spectrum of social narratives; race, sexual orientation, and politics. This particular case involved one Jussie Smollett, a 38 year old African American and homosexual, and as ironic as it may sound, an actor and cast member of the television drama series “Empire”.

The original accusations by Smollett involved an incident played out on a desolate and frigid night in the city of Chicago. According to the police report, Smollett claimed as he walked at 2:00 AM along the deserted street, he was accosted by two masked “white men”, who physically attacked him shouting racial and homophobic slurs, doused him with bleach, tired a rope around his neck, and yelled out “this is MAGA country”.

The mere mention of the term MAGA (Make America Great Again), has devolved into a slogan with racist overtones and is now regarded by the Left as a shout out, a call to arms, so to speak, to all the deplorable that this is your land.

After exhausted police work and many hours of investigation, and confronted by a lack of cooperation by the so-called victim, it was determined that Smollett had fabricated the entire episode and that the two men who were black and acquaintances of his were paid to partake in the staged crime. The ugly truth here is that not only was law enforcement obligated to direct its manpower and attention toward this waste of precious time, but real acts of violence and possibly deadly criminal activity, might have taken a back seat to the whim of a spoiled celebrity, who it was later revealed perpetrated this act in order to gain victim and hero status, and possibly a higher salary for his part in the TV series.

Lest we forget the media’s role in this calamity; the fourth estate was given a gift, an opportunity to once again indulge in their favorite past time, blaming the president. Like the Covington Catholic High School student incident, the media amplified the elements of the attack, and in their usual biased reporting gave Smollett the benefit of the doubt without allowing for any concrete evidence, and for the investigation to be completed. While Smollett became the darling of the media and celebrity elite and was given every opportunity to indulge his demented fantasy, the president became the genesis and causes that gave birth to this heinous faux crime.

As I previously mentioned bogus hate crimes are on the rise, and following are brief summaries of just a sampling of what has occurred since Mr. Trump took office.

*St. David’s Episcopal Church, in Brown County Indiana, recognizes same-sex marriage. The house of worship was vandalized with anti-gay slurs and Nazi swastika symbols, and the words “(Heil) Trump”.    It was proven that this ‘hate crime’ was a hoax committed by the church’s gay organ player.

*One week prior to the 2016 presidential election, the Hopewell Missionary Baptist Church in Greenville, Mississippi was set on fire. The words “Vote Trump” were discovered outside the burnt remains of the church. The investigation revealed that it was not a Trump supporter who perpetrated the bogus crime it was a member of the congregation, who was black.

*At the University of Louisiana, a Muslim student claimed that two white Trump supporters attacked her and stole her hijab. The story went viral, an in the interim the Lafayette Police Department proved the incident was a hoax. The perpetrator was out drinking that night and was afraid her strict Muslim father would be angry.

*Following the Pittsburgh synagogue massacre, Trump supporters were accused of the vandalism of a Brooklyn, New York synagogue that included Nazi symbols. It was later determined that the perpetrator was a black man who worked for the New York City council speaker.

*The Eastern Michigan University was vandalized for months with KKK symbols, and slurs that included “Leave n—–s”. A former African American student was eventually caught; the university police chief stated the reason for the crime was “totally self-serving”.

These are but a few of bogus hate crimes, but what they prove is that the extent of the emotional breakdown and frustration of the Leftwing and the never-Trump crowd has gone beyond what can be considered as the norm, into the irrational. The past two-plus years have added a new dynamic to the cultural and political divide that is ever widening. And if this continues and increases in intensity, then perhaps law enforcement will have to establish, if they have not already done so, a special unit just to investigate what at first is perceived to be hate crimes.