Egos, Money and POWER, with emphasis on POWER. That is all that seems to be driving the Democratic Party and the MSM now. All you had to do to see this was to watch what happened in the “Washington Cesspool” over the last few weeks, especially this week. In an interview on Tucker Carlson’s show last night, September 4, Britt Hume explained what is happening in a remarkably clear and concise way. He said that the Democrats have been using the Supreme Court to shape America’s legal system for many years. They have deliberately used the Supreme Court to get laws in place that they could not get passed in legislation in Congress, or signed into law by a President, that would not be overturned on appeal. As I listened to his detailed explanation it became crystal clear to me that he was correct. He used abortion rights and Obamacare as perfect examples of this and how both of these became fixed law after they worked their way through our justice system and were ultimately decided by the Supreme Court. This is why the Democrats are so obsessed with destroying the Brett Kavanaugh Supreme Court nomination. If he is approved and sworn in it will create a conservative, Constitutional leaning court for decades. And if President Trump gets to appoint another Supreme Court Justice it will be virtually impossible to change the make-up of the Court in any of our lifetimes! This is the Left’s worst nightmare coming true, so their objective is to stop the Kavanaugh appointment at any cost.

The first day of the Kavanaugh hearing was not like anything I have seen in my lifetime. The Democrats only have one chance of keeping the Supreme Court from shifting to the Right, and it is a poor one. Their only chance is too delay the hearing until after the mid-terms and hope they can take control of the Senate during those elections. And even that is weak because the Republicans will still control the Senate until January 2019, even if they lose the Senate on November 6. I personally do not think the Republicans will lose the majority in the Senate regardless of how the MSM is frantically trying to spin it.

The first day of the Kavanaugh hearing was interrupted 63 Times by the Democrats! These interruptions were obviously carefully pre-planned and choreographed to maximize their effectiveness. This was what can only be described as a “last ditch” effort to shut the hearings down indefinitely. Thanks to strong Republican leadership the Left failed miserably. All they accomplished was to make themselves look un-American and totally self- serving. Richard Blumenthal, Kamala Harris, and Cory Booker all set the drama performance bar especially high for their fellow Democrats with their totally out of order, carefully planned and choreographed interruptions of the proceedings. Blumenthal even made an obviously well-rehearsed attempt to appeal to Kavanaugh to “voluntarily withdraw from the proceeding until the Democrats had adequate time to review all his records”. It is important to note that almost all the Democratic Senators refused to even meet with Kavanaugh prior to the hearing making it clear that they were already an absolute NO vote. Delaying the hearing will only give the Democrats more time to try and find ways to destroy his appointment. This is dirty politics at its worse.

In addition to the organized and carefully choreographed Democratic outburst we also saw the same organized and carefully choreographed “spontaneous” disruptive outbursts from protestors who managed to get into the hearing room. The Democratic Senators, with the help of the protestors, managed to continually disrupt the hearing the entire time that it was in session. 70 protestors were arrested!

And let’s not forget the MSM’s role in all this! Bob Woodard, a longtime Washington Post journalist announced this week that his new book, which has not been released yet, is an absolute “tell all” about the Trump Presidency being in a total state of turmoil. I use the word “journalist” very loosely in this case because it appears that all of his sources were second or third hand. None of the experts out of the book that have been selectively pre-released so far has been originally sourced! The pre-releases of these experts were done specifically to hype the book and hurt the Kavanaugh appointment, and ultimately the Trump Presidency. Woodard originally made his fame when he helped expose the Nixon “cover-up”, which resulted in Nixon’s resignation. He has been at the Washington Post since 1971 (57 years). This book is obviously a feeble attempt at remaining relevant in the “Washington Cesspool”.

Chuck Todd, the Political Director for NBC and host of “Meet the Press” is another hard left member of the MSM. He recently posted a lengthy essay in “The Atlantic” arguing that the media needs to “start fighting back “ against its critics. He specifically called for a more aggressive press with a lower tolerance for talking points. I find this call for more “intolerance in the MSM”, coming from one of the most intolerant hard Left members of the MSM, to be absolutely inconceivable! The timing of this essay also appears to be carefully choreographed to impact the Kavanaugh appointment and mid-term elections.

Those of us who want America to be “great again” must not be silent. We must continue to stand up and support President Trump’s tireless efforts to “make America great again”, especially at the ballot box! 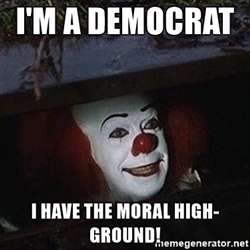