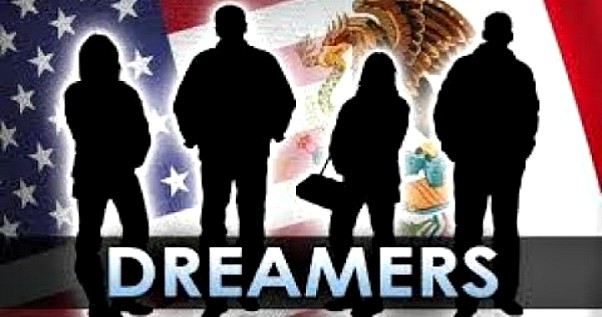 Once again, the DACA debacle continues to play out. The progressive socialist Democrat Party and corporate sycophants continue to talk of the  DACA kids are all high valued in the culture of this country. After a look at this comments by the Center of Immigration Studies prove that much of these comments are false.

CIS has shown that nearly half of these DACA recipients are only proficient in English at a “Basic” level and almost a quarter are considered “functionally illiterate”. The basic requirements in the DACA policy was that DACA kids should be proficient in the English language. It appears that the progressive socialist Democrats do not consider literacy to be a requirement for entry into the welfare state that they have ensconced in our culture specifically for this purpose. It would be interesting to see the open borders types including Durbin, Schumer and even the Never Trumper Lindsay Graham explain to the American People why we should give legal residence and even citizenship to people who have not bothered to learn English during their time of residence here. DACA required that beneficiaries  enroll in school, graduate from high school, obtain an GEED and have no convictions. Most of the requirements were waived as a matter of routine by the Obama administration. DACA is flawed and will increase illegal immigration. Congress should focus on enforcement and immigration policies.

DACA registration, according to the CIS, was non existent for the most part. Only a handful of the applicants were ever interviewed or verified. A total pass of DHS background application allowed people with false security cards, forged identity documents, illegal drivers licenses or registering to vote were overlooked to assure the DACA registration.

This shows that in essence, these DACA recipients have no expectation of being assimilated into the culture of our country. Why should the people of this great country be forced to support these people with our taxpayer dollars when they have no intention to assimilate? The majority of these DACA recipients  have no chance at a good job but will continue to take money from the taxpayers to live as they see fit. CIS has also shown that 73% of DACA beneficiaries live in low income housing and reap all the benefits from food stamps to healthcare to welfare benefits.  Some states have even gone so far as to give illegals benefits that even an American citizen does not qualify for, such as free attorneys paid for by the taxpayer, free college, free abortions once again paid for the taxpayer and much more. And what do the American people receive for all these benefits:

And this is from the 8.4% of the population that are non citizens.

High school teachers have to explain to a majority of these illegals how to get welfare benefits, government handouts and a lavish life on the American Taxpayers dime so that they can take that information back to their parents.

Along with the CIS, is the report from the congressional Budget Office report that 1 in 5 DACA eligible Illegals will be on food stamps and other government assistance within 10 years. Under this DACA amnesty, the American public would be saddled with a $26 billion dollar bill. With 1 in 5 DACA recipients being on food stamps, and 1 in 7 on Medicaid.

From Vice President Mike Pence to  Sen. Flake and other establishment RINOS have already started to back away from the security that is needed in America. They have priorities that do not meet the needs of the American voters and an agenda that is far from the Trump agenda. Jeff Flake, who is not running in the next election feels he is free to show his true colors. A never Trumper with corporate donor background, Jeff Flake will do his best to have open borders and push the security and safety of the American people ou of the way to assure low wages for his cronies in big business. Flake sounds like nothing more than a RINO Chuck Schumer. The establishment, pro-amnesty Republicans are an affront to those who voted Trump President and will go out of their way to do serious damage to this country in every effort to bring down President Trump.

The Democrats are all for amnesty for DACA and want to move even further. The Center for American Progress Action Fund, a socialist organization funded by George Soros sent out a memo calling the DACA kids a

. Authored by Jennifer Palmieri , the communications director for the Clintons was sent to progressive socialist Democrat allies and legislators telling them to

“refuse to offer any votes for Republican spending bills that do not offer a fix for Dreamers.”

The memo clearly states that is not only the moral imperative but was a key to getting votes. The memo, acquired by the Daily Caller  states:

“If Democrats don’t try to do everything in their power to defend Dreamers, that will Jeopardize Democrats’ electoral chances in 2018 and beyond.”

Looking at how Progressive socialist have already made illegals voting in states such as California should be a wake up call to all citizens. The progressives will attempt to block government spending until and unless that get the deal that want for DACA. Our members of Congress who believe in the majesty of this country and the founding principles of the country must resist the upcoming dangers that DACA will bring into the country.

There are steps that must be done to get control of the immigration debacle that pervades our country right now:

The American people are not racists but e do have a love for our country and country. Making America Great Again is not racist and it is not meant to make America “White” again. After 40 years of progressive socialist screaming racism they now need to count on low information and illegal aliens to  supplement the votes they are losing .

DACA is a debacle, it needs to be ended.