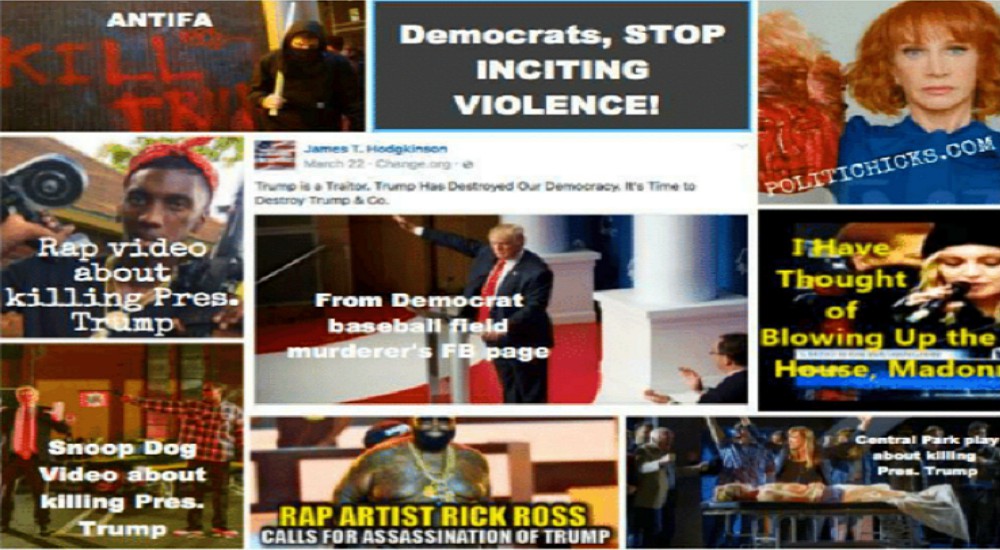 This fake bomb hoax is an obvious distraction and deflection attempt by the desperate and un-democratic Democrats.

Since Trump was elected all we’ve heard from the left is hate, insult, and false accusation. All we’ve seen from them is shooting, rioting, bullying, slander, vandalism and even the casting of spells. We’ve heard public cursing of the president from celebrities like Robert DiNero. We saw Kathy Griffin’s disgusting decapitated Trump meme. We’ve seen plays and music videos depicting the assassination of the president.

Triggered liberals steal MAGA hats off of teenagers, chase down and beat up Trump supporters, pick on children and the elderly alike. Rioting, vandalism, threats, slander, and bullying – at the behest of Democrat leaders – has exposed the left for the un-democratic, anti-American, radical leftist enemies of freedom they are.

Hollywood “#MeToo” hypocrisy has been exposed. After attacking Trump for his being a “player” – we’ve discovered 10 times the amount of sexual perversion and predation on the part of Democrats…as if the party of Ted Kennedy, Bill Clinton, Anthony Weiner, etc. has any chance of making Republicans out to be anywhere near as bad as Democrats are.

Their precious “blue wave” is receding. The Russia Collusion hoax is a total bust. Their Kavanaugh smear failed. Black approval for Trump is up to 36% and Blacks are rapidly escaping the Liberal Plantation. “WalkAway” is a major trend. The Gosnell movie is creating pro-lifers. And the Honduran Migrant Invasion looks so bad for them that they even suggest Trump is funding it.

They know the “Jobs not Mobs” slogan is resonating and they need a distraction.  They need a way to shift blame to the GOP. What better way than with a fake bombing hoax? It’s so blatantly obvious.

People have been predicting some kind of false-flag October-Surprise from the Democrats. I don’t expect this bomb scare hoax to be the last.