The Art of the Tax!

Donald Trump claims he will “fight for” a better tax system as President.  We usually doubt politicians “fight for” promises, but Mr. Trump seems like a guy who will deal with the problem. Where taxes take money from people who expand the economy while government is to “keep the peace, guard the realm and build the roads.”  What is the optimum tax rate?

In the 1980’s “The Way the World Works” by the late Jude Wanniski was popular.  He was an Editor at the Wall Street Journal.  In the book he told the story of having lunch at the White House with Ronald Reagan, Dick Cheney, Donald Rumsfeld and Dr. Arthur Laffer who graphed a concept on a napkin in a flash of genius!  Jude saved the napkin to put the image in “The Way the World Works,” dubbing it “The Laffer Curve” creating one of the great myths pleasing the Washington, DC elected ruling class to this day. 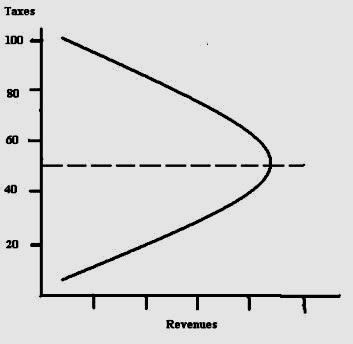 The figure simulates a female breast, thus riveting the attention of male economists.  The dashed line through the maxima suggests the economy is optimum when tax rates are 50%    Dr. Laffer is likely a disciple of John Maynard Keynes, who was for high taxes, and leaning to socialism as it is popular in academia where most of their money comes from government.   In Laffer’s time the successes of Kennedy, Reagan and Gingrich with lower taxes drove Laffer to compromise facts. The curve was not correct.  I went to a public library for the Statistical Abstracts of the United States.  In a three day grind I quantified the concept by extracting GDP and tax data of America from 1776 to 1987, drew a scattergram with 211 data points to strike a “means” curve through said data points and create “The Genesis Curve” wanting to  commemorate the first time the concept appeared in history: Genesis 47:24 in the Bible, “…ye shall give the fifth part unto Pharaoh, and four parts shall be your own…”

Europe in the Dark Ages was a laboratory for government and economics. They found duchies taxing 20% thrived while those taking less could not keep the peace, the roads or the realm.  Those taxing over 20% slid into corruption so they defined “The King’s Fifth” as the optimum level.

Meanwhile back at the data, drawing a scattergram and plotting a curve through the points as well as developing an equation I found that the optimum peak for taxation was 18.3%!  Very close to the “one in five” of antiquity, the Bible and “The King’s Fifth” of Medieval Europe. 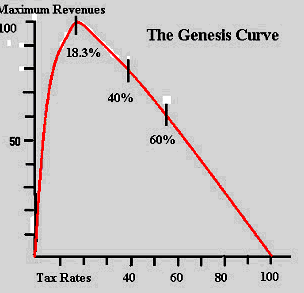 Where this is a great truth long known and several times discovered, why does it not prevail in this time?  And, what do we see from the better informed minds of our time:

Washington Post Dylan Matthews wrote “Where Does The Laffer Curve Bend” noting Art Laffer became famous on the idea there is an optimum tax rate for an economy to thrive.  He queried academicians and members of the elected ruling class on the concept.  Including: Dr. Emmanuel Saez, the E. Morris Cox Professor of Economics at UC Berkeley, who wrote:  ”The tax rate t maximizing revenue is: t = 1/(1+a*e) where “a” is the Pareto parameter of the income distribution (= 1.5 in the U.S. and easy to measure), and “e” the elasticity of reported income with respect to 1 – t which captures supply side effects. The most reasonable estimates for “e” vary from 0.12 to 0.40 so e = .25 seems like a reasonable estimate.  Then t = 1/(1+1.5*0.25) = 73%  which means a top federal income tax rate of 69% (when taking into account the extra tax rates created by Medicare payroll taxes, state income tax rates, and sales taxes) much higher than the current 35% or 39.6% currently discussed.”

It should be clear this is a smokescreen as Dr. Saez makes no attempt here to illuminate anything but his reputation.  The sooner the American people get the idea that people who write like this are not sincere, but laying down smokescreens the better.  What this reduces to is “We write your ticket.”

If the concept of an optimum tax rate comes out of the mists of antiquity to appear in the collection of manuscripts that became the Holy Bible and then rediscovered in Europe during the time we call “The Dark Ages,” then it should be expressible in language that anyone who able to tie his shoe laces can understand!  It is just that simple.

Our economic history reveals when we tax at the rate of 18.3% our economy expands 10% to 30%!  That event coincided with the invention of the cotton gin which increased our output of exportable fiber dramatically.  It was also one of the causes of the Civil War as the economics and culture of southern states would change when little black children did not have to stay home all day and pull cotton linters from seeds.  Machines did it better, faster and cheaper.  We have a similar event horizon with our coming robots, but this time it will be for adults in a decade or two.  With a clear understanding of these facts we will thrive.  Without we are at the mercy of the elected ruling class.

While our tax rates are 40%, when all are summed, including those hidden in goods, they are nothing like European rates.  Denmark is highest at 83%, but none are under 59.6%.  Value Added Tax, VAT, is the hidden tax in every good. 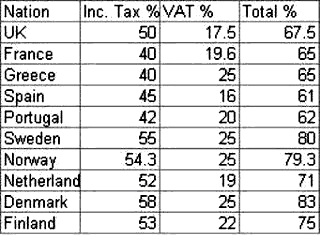 Socialism defenders say, “Yes, but we get a lot for it,” However, it’s like going to the DMV for the necessities of life, much less what we like to have and how we get it.  We have always have more in real wealth, goods and better lifestyles than Europe because of our free and open markets, but the Democrats want to make us more like Europe.  Why should this be?

The elected ruling class wants power over the people more than anything.  They feel diminished when they see billionaires in the private sector.  These people are anti-freedom.  They dream of arriving at an airport to a thousand people on their knees screaming, “We are not worthy!  We are not worthy!”

If we’re smart we’ll see that no elected person ever gets more than one term.  “If they are in, put them out,” must be the cry.  In three elections, six years we the people can be in charge.  The insanity of the elected ruling class is the rising arc on this graph: 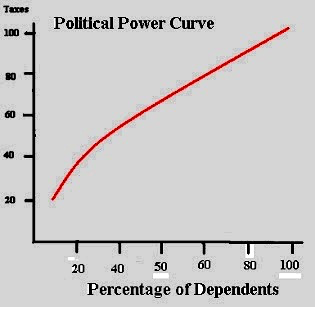 While this curve is conceptual rather than mathematical we believe it is as valid as anything for which an equation exists.  In physical science equations are often written after-the-fact.  This curve is fact.

In socialism government has 100% of everything from power through money and more.  At the optimum of the Genesis curve concept they have 18.3% and that is the problem.  It is up to us to change these people every term as power corrupts and absolute power, as in socialism, corrupts completely.

Europe is closer to the writings of antiquity and the great truth expressed in Genesis 47:26, “…and Pharaoh shall have one in five.”  And they were the  birthplace of “The King’s Fifth.” Both defined an optimum tax relationship between the ruling and the ruled as 20%.

If we know the optimum tax rate, and surely those in Congress do, why don’t we put a flat tax of 18.3% on all working or in business?  We have to deal with state and local taxes, perhaps limiting them to a total of 9% and let the federal people take 9.3% of the GDP which today would be $1.58 trillion when they are spending $3.5 trillion?

Our social programs are now $2.27 trillion.  If they were privatized, which would net more in benefits and generate trillions in capital leaving the federal government an obligation of only $1.23 trillion and a surplus of $350 billion which they could apply to the national debt meaning it would be paid off in 54 years.  Bond terms are 30 years so we have to float new issues and ladder the system, which has been done.

To be sure there are questions and the greatest of them is that we cannot predict the cataclysms of the future.  We can prevent some by outlawing them.  We can outlaw war by announcing we will carpet bomb any nation that invades another or promotes international terrorism like Iran today.  We will not give a warning; we do it and Iran would be a good start.  While we would kill millions of civilians today we must accept they bear responsibility as they were unwilling to fight for their freedom as we were in 1776.  This is what makes a nation and keeps it alive; ideas like the Genesis Curve.