That Inflation Number of 9.1 is Bogus at the Least 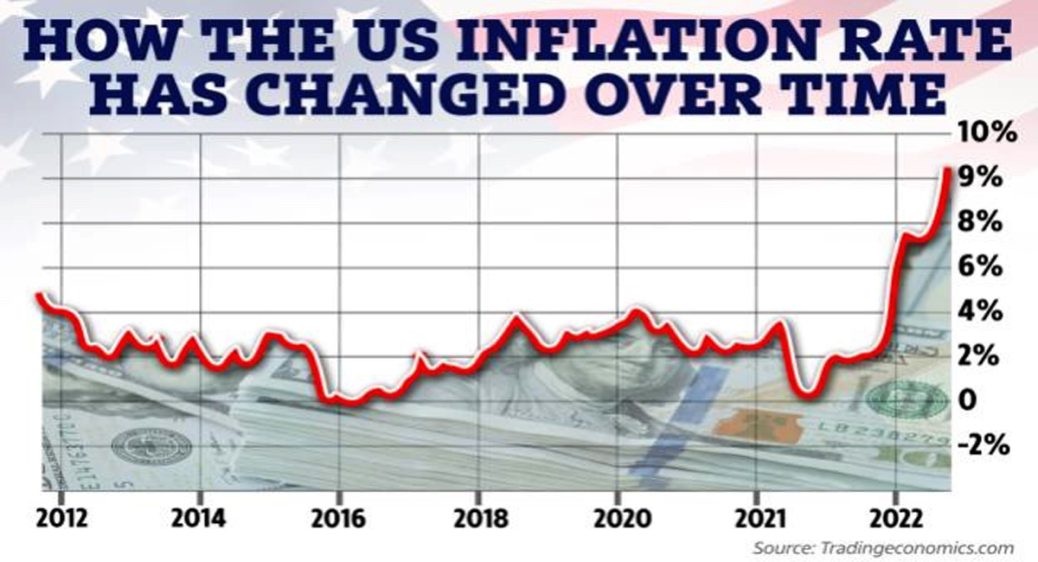 The same department reported that the producer prices were up 11.3% the next day for the 12 months ending June 30. Much like the CPI report, the PPI showed that the annual inflation rate was 13.2% based on the June change. Both of these numbers tell us that higher inflation is on the way, we may have some drop-off, but the momentum is still in place. The chart on the release shows the 1-month change in the price of goods was 2.4%, which is an annualized 28.8% inflation.

As long as both current inflation numbers are higher than the trailing inflation numbers, the Federal Reserve will be forced to continue raising interest rates. Federal Reserve Bank of Cleveland President, Loretta Mester, said Wednesday that if economic conditions remain the same when the U.S. central bank meets to decide its next monetary policy move in July, she will be advocating for a 75 basis point hike to interest rates.

I have written before that the Fed is charged with two missions, keep unemployment and inflation low. The principal tool they use to impact both is interest rates, and the Fed will use short-term interest rates to try and control both. The historical return of the short-term T-Bill should be equal to inflation, thus returning a net return of zero.

The current yield on the 90-day bill is at 2.38%, and with inflation at 9.1%, the yield on the bill has a long way to go. With the month-over-month inflation at 15.6%, the Fed has a long way to go. The market expects the Open Market Committee to increase interest rates by three-quarters of one percent in July and then 60 basis points in September. I believe, given the forward motion of CPI and PPI, the Fed may well have to be more aggressive in raising rates.

President Biden wants a $1 trillion reconciliation bill to support climate change and increase taxes. Centrist Sen. Joe Manchin (D-W.Va.), who has been a spoiler for some of the president’s spending plans, pumped the brakes on negotiations with Senate Majority Leader Charles Schumer (D-N.Y.) over a budget reconciliation bill. Manchin warned that it “needs to be scrubbed much better” after a new report showed that inflation hit 9.1 percent in June.

Manchin told reporters he’s not sure if he can agree to anything beyond the prescription drug reform component of the bill, which has already been sent to the Senate parliamentarian’s office and has the support of all 50 members of the Democratic caucus.

“We know that we can pass the drug pricing OK on Medicare,” he told reporters. “Is there any more we can do? I don’t know, but I am very, very cautious.” He said, “And I’m going to make sure that I have every input on scrubbing everything humanly possible that could be considered inflammatory.”

He said that “deficit reduction is going to be 50 percent” of the new revenue gained from prescription drug savings and tax reforms, such as a 3.8 percent tax on wealthy individuals and couples who earn more than $400,000 or $500,000, respectively, from pass-through businesses.

He said the latest inflation report showing prices have increased by 9.1 percent compared to a year ago means negotiators will have to slow down and proceed more cautiously on putting together the budget bill. “Basically, take your time and make sure we do it and do it right. We can’t afford mistakes in the highest inflation we’ve seen in the last 40 years,” he said. Manchin has pushed back against a goal set by other Democrats of passing the bill before the August recess, saying that he sees Sept. 30, the end of the fiscal year, as the deadline.

The New York Post reported Manchin’s reaction to the CPI number. Sen. Joe Manchin (D-WV) came out with a statement shooting down any notion of the Senate passing additional stimulus funding being pushed by Biden, saying it would act as “more fuel to this inflation fire.” “Today’s inflation data illustrates the pain families across the country are feeling as costs continue to rise at a historic rate. 9.1% is cause for serious concern,” the swing Democrat said in a statement.

I believe we will see double-digit inflation before the mid-term election, and I expect it to creep up through the summer and the Fall. The higher it goes, the angrier the American voter will get, and I think they will take that anger out on the Democrats. Abortion and the green new deal will not significantly impact the election. While many issues are important to Americans, hundreds of millions have two concerns that will influence their vote, the cost to feed their families and the cost of gas to get to work.

According to Google, America has over 123 million households. Forbes reports that 68% or 83,640,000 households have enough money to cover a $400 sudden expense. This inflation is impacting the lives of almost 218 million Americans, as they get out and vote.