Thanks to Biden’s Dangerous Border Policy, Tens of Thousands of Illegals from Around the World Flocking to Mexico/U.S. Border

Joe Biden’s disastrously lax immigration policies has enticed tens of thousands of illegals from countries other than Mexico, Guatemala, and Honduras as people from around the world are increasingly seen breaking our laws and sneaking across the southern border.

Even CNN has noted that Biden’s ruinous immigration policies have become a beacon for lawbreakers from the whole planet, all of whom come here to sneak across our borders, break our laws, and then try to live off federal and state welfare programs.

Decades ago, the vast majority of migrants attempting to cross the border between ports of entry were Mexican. A few years ago, most came from the Central American countries known as the Northern Triangle: Guatemala, Honduras and El Salvador.

But now, according to Border Patrol statistics, the number of people coming from outside those places — from countries such as Cuba, Colombia, Nicaragua and Venezuela — is growing fast.

David Bier calls it a “radical shift” and a “new phenomenon that no one is talking about.” Bier, the associate director of immigration studies at the Cato Institute, pointed out this change in a recent thread on Twitter. It’s a telling detail, he says, that reveals a lot about what the Biden administration is facing at the border, and why the situation has been so difficult to solve.
To better understand this trend, CNN dove into the data.

This all started in 2020 when it became clear that Joe Biden was going to win the White House and would put an end to deportations and border security.

As CNN noted: “Here’s a look at what we’re seeing, why this change is so significant, why it’s happening, what this looks like on the ground and what could happen next.” 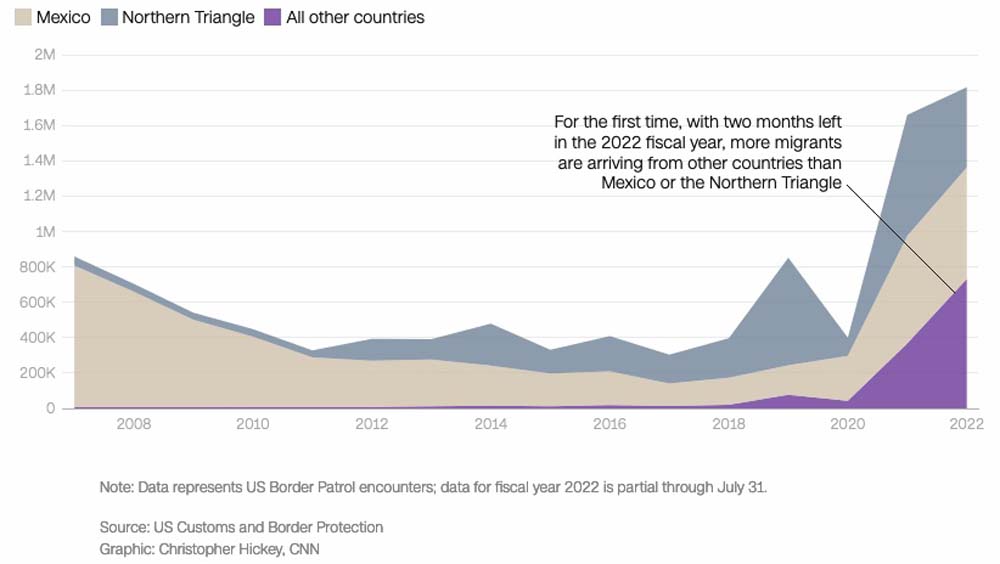 This is what Joe Biden is doing to this country.

Because the next time Democrats are in full control they want to institute mass amnesty and then get all these impoverished laggards, and criminals to vote Democrat so that they can stay in power in perpetuity.

It always has been their end goal.