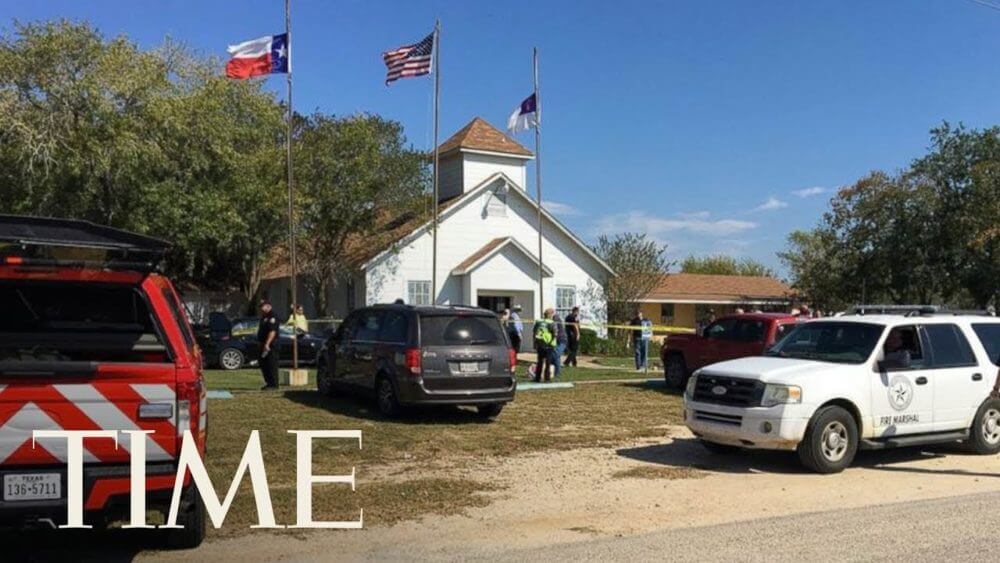 The First Baptist Church of Sutherland Springs, Texas, had just 50 members – until this morning. During the Sunday service, a gunman killed 26 of them and wounded 20 others. The youngest slain was 5 years old; the oldest was 72. When the Pastor, who was preaching out of town, was informed of the tragedy, he also learned that his 14-year-old daughter was among those murdered.

To say that this was a bloodbath would be to trivialize the word. To put it in some type of perspective, this was the third largest church massacre in U.S. history and the worst church shooting in Texas history. But facts and figures can’t communicate the impact of this slaughter of innocent victims gathered to worship their Lord.

This heartbreaking, senseless carnage saddens our entire nation. But it directly impacts hundreds of people in Sutherland Springs. It’s not just the families and close friends of the victims whose lives have been changed forever. It’s an entire town.

You see, the population of this rural town 35 miles from San Antonio is only 400. There is probably not a single person in the town who was not related to one or more or the dead or injured. If they weren’t related, you can be sure they knew them.

An entire church was decimated. An entire town was shattered.

This reminds me of a trip my wife and I took to Israel twenty years ago. Our delegation was scheduled to meet with the Prime Minister. The Deputy Prime Minister came in his place. He explained that a helicopter carrying 35 Israeli service members had crashed and that all aboard had perished. He told us this was a national tragedy because Israel was a small country and almost every citizen was connected in some way to at least one of the brave soldiers and airmen who had died.

How much more devastating must this tragedy be in a small town where over ten percent of its citizens died or were wounded in a matter of minutes? We need to pray fervently for this church and this town. They will need our prayer support for a long time to come.

Two thoughts come to mind as I contemplate today’s events. First, I doubt that any potential mass murderers will read this article. But if by chance someone evil or crazy enough to do something as awful as this sees these words, I implore you to do the people who have never done anything to you a favor. In most cases like this, the murderer kills himself after first taking the lives of others. This may sound strange coming from a pastor, but I beg you to skip the first part and go right to the second part of your plan. Kill yourself, and leave the innocents to live their lives.

Second, I want to encourage every pastor and church board in America to develop a security plan for their church. A year ago I spoke at a church very near to Sutherland Springs. As I spoke, I noticed two large men in suits standing thirty feet on either side of me, facing the congregation. They weren’t looking at me. Their eyes never stopped moving as they scanned the audience and all the doors of the large auditorium. I asked later, but I already knew the answer. These men were armed and were trained to protect the church. And there were other armed men and women throughout the congregation, as well.

“Sacrilege!” I can hear some of you saying. Churches are holy places, and guns have no place within their walls. I hate to rain on your parade with sound theology, but there is nothing holy about a church building. The people are the church. When they leave the building everything sacred and holy leaves with them.

Also, Jesus Himself told his followers to buy guns. Well, to be entirely accurate, He said to obtain that day’s equivalent of guns, which was swords. As He sent them out to do His work, He ordered his disciples in Luke 22:36, “If you don’t have a sword, sell your cloak and buy one.” I’m sure that if He were giving that instruction today, he would tell them to buy a gun instead of a sword.

I am the Chairman of the Board of a prison ministry which has a small village here in Florida where we minister to people who have been in prison. After our recent visit from Hurricane Irma (which thankfully did little damage here), we decided we should develop and implement a disaster plan. Obviously, we should have had one in place long before the hurricane threatened.

Don’t wait until a terrorist enters your church and starts spraying bullets into your congregation. Get the church leaders together and develop a security plan immediately. It should include, at a minimum:

1) Encouraging church members to carry guns to church. If your state requires a concealed weapon permit to do so, encourage that. In Sutherland Springs if one member had been armed, many lives might have been saved. Those who are armed should know who the others are so that they can sit in various parts of the auditorium to provide the best coverage, with particular attention to all entrances.

2) Consider professional security for larger churches. These need not necessarily be paid people. Most large churches have members who are sworn police officers, licensed private security, or well-trained ex-military people. Most would gladly implement a security plan for free. But often they are discouraged from even carrying their weapons in ‘politically correct’ (but foolish) churches.

3) Finally, I believe every pastor should be armed. Think about it. Almost everyone has their backs turned toward potential danger. Unless your church is like the one I described above, the pastor is the only one facing the rear doors through which the danger will likely emerge. He or she will be the first to see the killer. A shepherd’s first job is to protect the sheep. Unfortunately, today that responsibility includes protecting them from madmen who think it’s great to kill the saints as they worship.

The facts are still emerging, but news reports say that a member of the church or the community engaged the gunman in Texas as he emerged from the church. This caused the gunman to flee, possibly saving more lives. The armed citizen pursued him and may have been the one who killed him.

Finally, if you have people in the church who object to the adoption of a sensible security plan, have some 11” X 17” placards printed up and suggest that those people wear them on their backs. They should read, “I don’t believe in guns, and I am not armed. Shoot me first while the smart people in the church get their guns out – and stop you cold.”

NOTE: This article was originally posted at www.ConservativeTruth.org
PLEASE LIKE US AT www.Facebook.com/DrTomTV