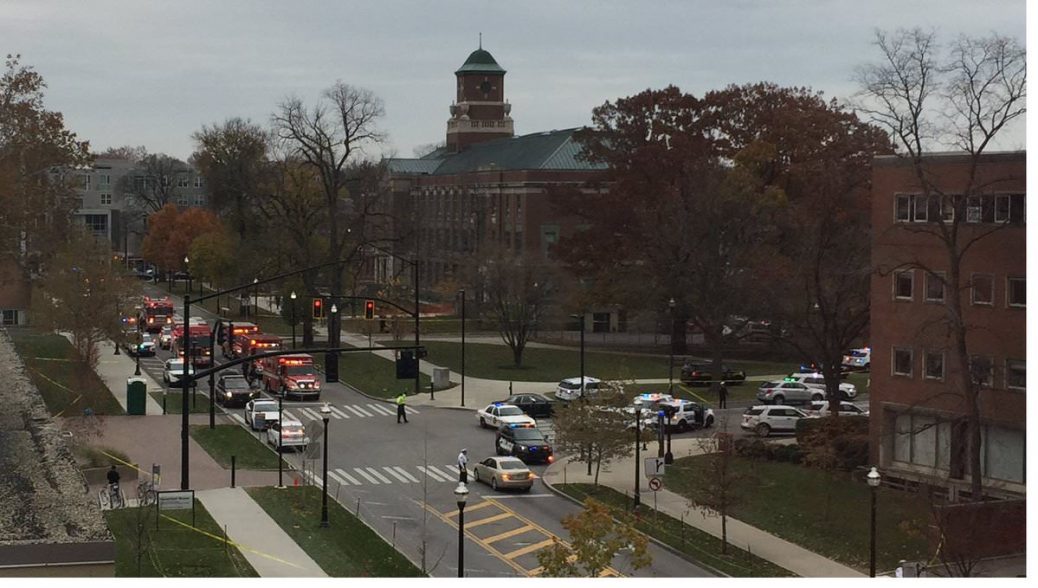 In breaking news, a Middle Eastern (Somalian) 20-year old student named Abdul Razak Ali Artan used a vehicle to intentionally  run over at least 9 pedestrians and proceeded to exit his career and “attack them with a machete”. The attack is consistent with an “ISIS style killing attack” similar to ISIS attacks which have spread across Europe. “This is one in a litany of machete/knife attacks at train stations and platforms and public places by devout and pious Muslims,” said political scientist Pam Geller.

Less than a minute after the attack, a brave OSU police officer shot and killed the suspect. This police officer’s heroism should not go unnoticed or unreported as the mainstream media tends to do – this police officer is a testament to his/her profession and a true American hero who has protected our country from Middle Eastern terror yet again.

Video of witnesses can be seen here as reports and details of the attack filtered out through social media throughout the afternoon.

In a predictable turn of events, the mainstream media has thus far refused to identify the suspect as Middle Eastern and has labeled him as “disturbed” or “a college student” instead of what he is – a Middle Eastern terrorist. Avoidance of the terms “terrorist” or even reference to the ISIS style killing is yet another example of the mainstream media being part of the “fake news” they so consistently bash.

It should be noted this isn’t the first time immigrants from Somalia have attempted to attack our country this year. In April, a Somalian citizen attempted to kill Border Patrol agents 30 miles north of the U.S.–Mexico border by running them over with his truck.

The only outlet which has even come close to calling this attack what it is, a terror attack in the heartland of America, is shockingly CBS News. The thoughts of the nation are with the students at Ohio State, the families of the victims, and the brave men and women of the Ohio State Police Department who kept this attack from being even worse.

UPDATE: A 20-year-old Somali man is the suspect in the Ohio State University attack https://t.co/G7ANHT8lbn pic.twitter.com/kdOzF7aWiV