Ten Ways Mitt Romney Has Stabbed President-Elect Trump in the Back! 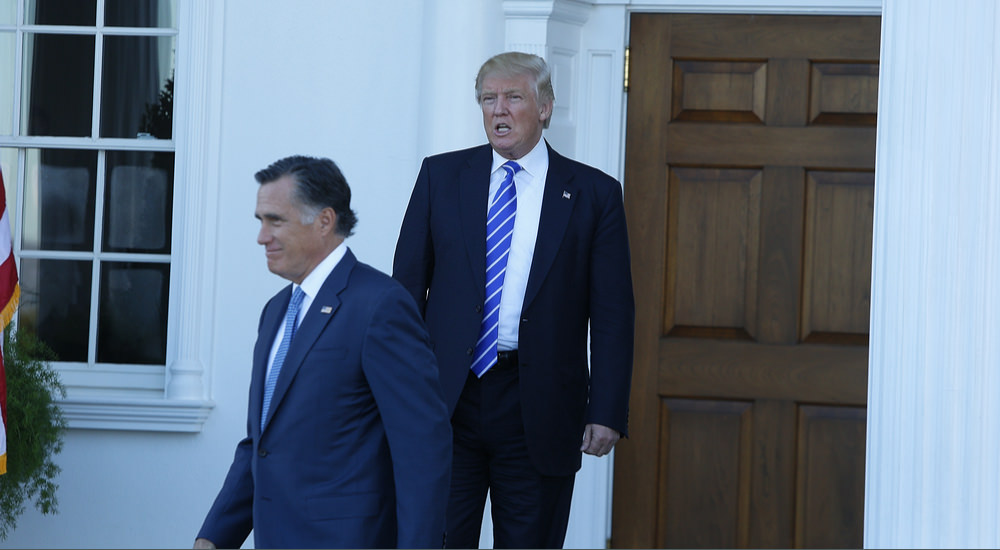 As President Trump deliberates whether failed Presidential candidate Mitt Romney should join his cabinet as Secretary of State or if he should choose from a variety of other candidates (including Rudy Giuliani), the question arises: Has Donald forgotten Mitt Romney’s numerous betrayals? In case he has, we have collected ten of Mitt’s disloyal and frankly venomous insults of his would-be new boss.

1.Romney called President Trump a ‘fraud’, a ‘phony’, and said he ‘lacks judgment’ at a speech in March.

“Here’s what I know. Donald Trump is a phony, a fraud. His promises are as worthless as a degree from Trump University. He’s playing the American public for suckers: He gets a free ride to the White House and all we get is a lousy hat. His domestic policies would lead to recession. His foreign policies would make America and the world less safe” – Mitt Romney

3. Romney led a group of #NeverTrumpers to drum up a third party challenge to Donald Trump once he had won the Republican nomination. In May he said, “No, I’m certainly going to be hoping that we find someone who I have my confidence in who becomes nominee. I don’t intend on supporting either of the major-party candidates at this point.”

“Trickle down racism, trickle down bigotry, trickle down misogyny, all these things are extraordinarily dangerous to the heart and character of America and and and so I’m not, I’m not looking for Mr. Trump to change a policy that more aligns with my own, this is not a matter of just policy, it’s more a matter of character and integrity …  I think his comments time and again appeal to the racist tendency that exists in some people and I think that’s very dangerous.” – Mitt Romney

5. Two days before the election, Mitt Romney committed himself as a permanent #NeverTrumper. In an Atlantic article on November 6th, Romney was listed as one of the last “Never Trumpers” who would never support President Trump.

6.. In March on Facebook, Romney said “Trumpism has become associated with racism, misogyny, bigotry, xenophobia, vulgarity and, most recently, threats and violence. I am repulsed by each and every one of these.”

7. Romney told Fox News Neil Cavuto, “I’ll either vote for a conservative who runs or I’ll write in the name of a conservative… I cannot in good conscience vote for a person who has been as degrading, disruptive and unhinged as I’ve seen Donald Trump be.”

8. Romney wrote countless anti-Trump tweets which varied from calling him names, a racist, and publicized various anti-Trump articles and mainstream media publications. A few of his “greatest hits” are included below.

He's playing the American public for suckers: He gets a free ride to the White House and all we get is a lousy hat. (2/2)

A disqualifying & disgusting response by @realDonaldTrump to the KKK. His coddling of repugnant bigotry is not in the character of America.

10. The would-be President likely did not vote for Donald Trump. In June, Mitt told CNN that he preferred Gary Johnson or Bill Weld to Donald Trump – “…it would be very easy for me to vote for Bill Weld for president.”

All told, each of these “incidents” paint a clear picture of an opportunist politician in Romney who is now groveling at President Trump’s feet to remain politically relevant despite the fact that he clearly does not respect, agree with, or is loyal to his would-be boss. I don’t know how a President hires a man to pursue his agenda who has so clearly stabbed him in the back on countless occassions.

Either President Trump will choose  to ignore these entirely inappropriate insults from Mitt Romney and prove himself to be one of the most forgiving, objective leaders of this generation or he will reject Mitt’s interest in the Secretary of State position based on his countless examples of disloyalty and betrayal.