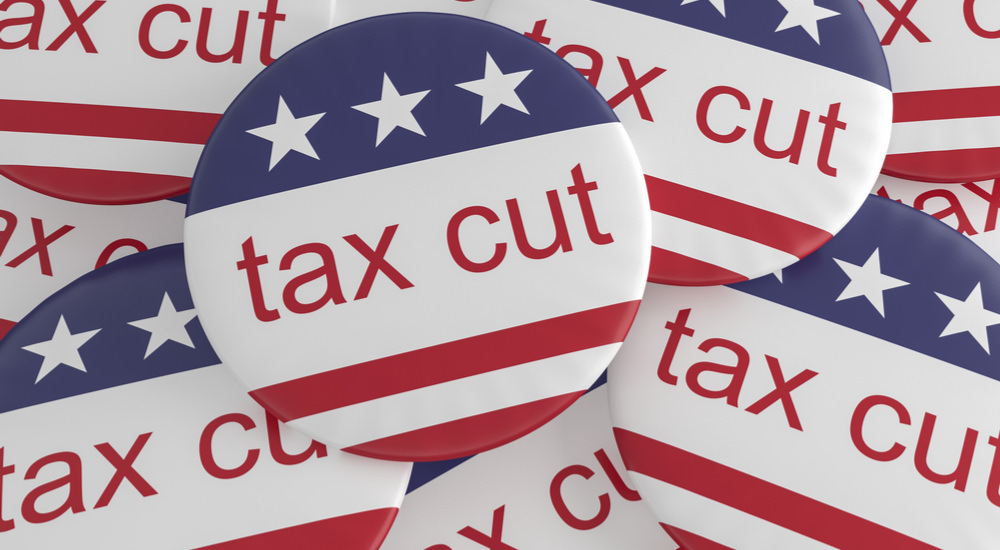 As we said on iPatriot earlier today, tax cuts always bring prosperity because they lead to an entire chain of events that each impact and improve the economy.

In a recent statement, the Trump administration explained why this happens.

From the White House:

“We have a once-in-a-generation opportunity to pass tax reform that is pro-growth, pro-jobs, pro-worker, pro-family, and pro-American.” – President Donald J. Trump

CURRENT TAX SYSTEM HOLDS AMERICA BACK: Without tax cuts and tax relief, the American economy will be stuck with low economic growth and depressed wage growth.

• For the last decade, annual growth in U.S. GDP has been stuck below its post-WWII average of about 3 percent.

• Without new economic policies, like the Unified Framework, the United States economy will likely continue to be stuck with low growth rates.

o The Congressional Budget Office projects that our Nation’s current economic policies will continue to keep our economy stuck at less than a 2 percent average growth rate for the next ten years.

• Wages and corporate profits used to grow at nearly the same rate, but that is no longer the case. In the last eight years, real wage growth has stagnated while real corporate profits increased by an average of 11 percent per year, according to an analysis by the Council of Economic Advisers (CEA).

o Wage growth has failed to keep pace with corporate profits as corporate tax rates in the United States have become increasingly uncompetitive.

• In the last five years, new equipment and capital investments detracted from the productivity growth of the American worker, for the first and only time since World War II.

• Cutting the top Federal corporate tax rate from 35 percent to 20 percent and allowing businesses to write off the full cost of non-structure capital investments immediately would mean faster economic growth and higher wages, according to the CEA.

o GDP could increase by between 3 and 5 percent in the long term.

o American annual household income could increase by an average of $4,000.

• The corporate tax cuts and relief in the Unified Framework could mean a boost to the economy.

o 3 to 5 percent increase in GDP over ten years could represent an additional $700 billion to $1.2 trillion in economic output, based on CEA’s calculations and CBO’s baseline.

o Just cutting the corporate tax rate to 20 percent is estimated to increase long-run GDP by 3.1 percent, according to the Tax Foundation.

o Wages for American workers of all skill levels would increase after corporate taxes are cut.

• The United Kingdom shows how not to do corporate tax reform: despite the perception that they were a tax cut, the U.K. changes after 2007 resulted in a net tax rate increase. But changes on the corporate tax side of the Unified Framework lower taxes.

AN AMERICAN MODEL FOR AMERICAN JOBS: The Unified Framework will end the “offshoring model” as companies will bring profits back and invest in American workers.

• A reduction in the corporate tax rate will keep more money and investment in the United States, while reducing the incentive for companies to shift profits abroad, according to an analysis by the CEA.

o In 2016, a Federal corporate tax rate of 20 percent could have brought up to $140 billion in corporate profits back to America, according to CEA estimates.

o Those profits could have raised the incomes of U.S. households.

o The United States has the highest statutory corporate income tax rate among the 35 industrialized Organisation for Economic Co-operation and Development (OECD) countries.

o The U.S. statutory corporate tax rate has been higher than the OECD average for almost 20 years.

• Last year, more than 70 percent of foreign profits earned by U.S. firms were kept offshore, up from 42 percent in 1984, according to an analysis by the CEA.

o Companies hold an estimated $2.8 trillion in earnings offshore, according to Audit Analytics.

• Cutting corporate tax rates will encourage firms to invest back in the United States, creating well-paying jobs for hardworking Americans.

o After President Bush’s 2003 tax cuts, the economy created 7.8 million jobs over five years, based on data from the Bureau of Labor Statistics.

o After President Reagan’s 1981 tax cuts, the economy created 14.8 million jobs over five years based on data from the Bureau of Labor Statistics.

o After President Kennedy’s tax cuts, the economy created 12.0 million new jobs over five years based on data from the Bureau of Labor Statistics.