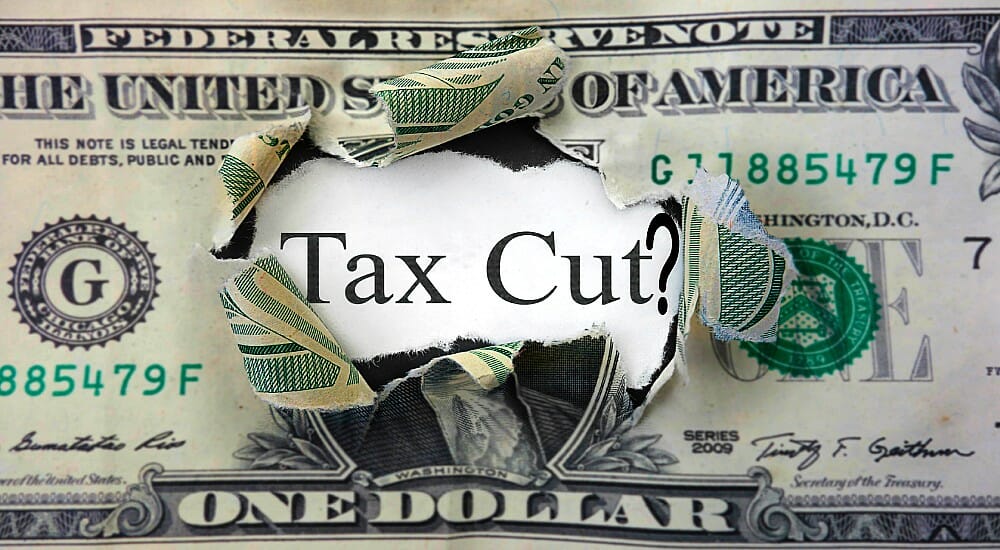 The “tax cut” is not a tax cut.  Congress is just shifting the tax burden to the high-tax states.  In other words, those of us who are taxed the most get a tax increase.  Just another example of the poor voting to take the money of the rich, i.e., democracy in all its glory, better known as socialism.  (We’re supposed to be a republic!)
Real tax reform or a real tax cut would mean taxes are simplified and everyone gets a tax cut.  Right now, even those who pay no income tax must pay sales tax and property tax and gas tax and utilities taxes and hidden corporate taxes.  All of us are taxed to death!
And what happens to the money?  It’s wasted, spent on things the Constitution does not allow Congress to spend money on, given to companies and groups who will then “donate” to politicians and their “foundations” or pay them “speaking fees” after they’re out of office.  In other words, the money winds up making politicians and their enablers very rich.  Ever notice that politicians are all rich?
Real tax reform would require both a balanced budget and government to spend much, much less!  Ancient Israel ran its whole country plus its religion on just 10%.  Why can’t we run just our country on only 10%?
So here’s my tax plan, which is real tax reform:
1. Government must adhere to a strict balanced budget.
2. 10% personal income tax, no deductions, no exemptions.
3. No other taxes allowed.
4. States get a percent (set by Congress) of their residents’ 10%.
5. States give part of their percent to their cities and counties.
All of that (especially the 10%, the no other taxes, and the balanced budget) should be written into an amendment to the Constitution so it’s more difficult to change.
That would bring corporations and jobs back to the U.S. to take advantage of the lowest corporate tax rate in the world (0%).  In addition, it would make home ownership more affordable, allow retirees to keep their homes, lower the costs of goods and services, greatly increase our GDP, eliminate the need for most of the IRS, and save the country several billion dollars a year in tax preparation costs (not to mention government savings from having a smaller IRS and fewer forms to print).  And it would decrease the national debt due to the balanced budget requirement.
It would also reduce tens of thousands of pages of tax code and hundreds of tax forms down to one page of tax code and one tax form.
The downside?  Politicians probably wouldn’t be able to get so rich in office due to funds not being available for pet projects.
And the 40+% of people who have income but don’t pay income tax would have to pay 10% just like everyone else.  However, they wouldn’t have to pay any, other taxes.  When you add up the 8% sales tax many of us pay, plus property tax (yes, it’s included in your rent), gas tax, utilities taxes, and hidden corporate taxes (on everything we buy), many, if not most, of us pay more than 10% in just those taxes.
Real tax reform is possible but it requires the government to spend less!