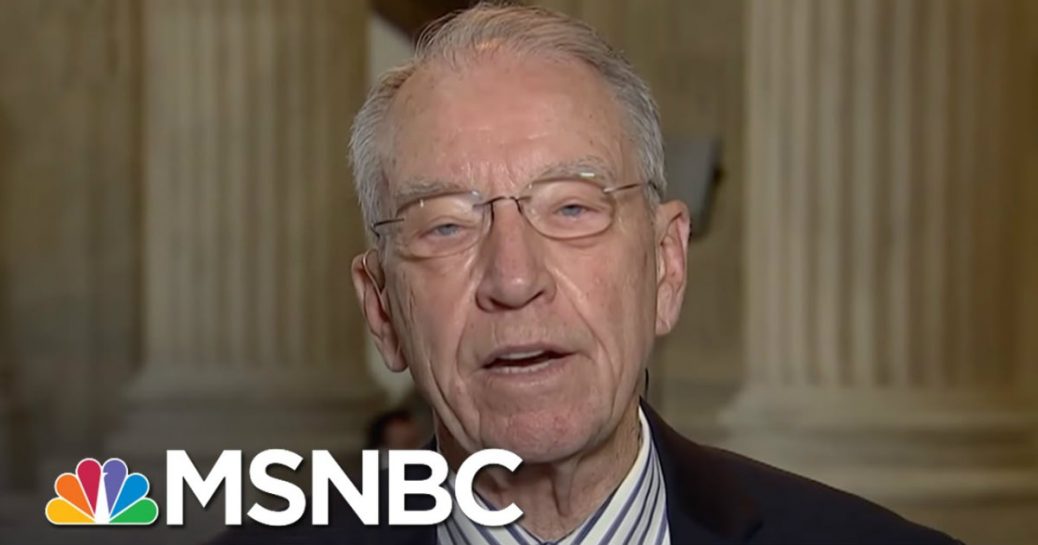 “Suck it up and move on!” – that the advice of Chuck Grassley to the hysterical “cri de cœur” of the mass media.

Below is a copy from Senator’s Prepared Statement published at his website:
“… Mr. Comey testified before the Judiciary Committee last week. Senator Blumenthal asked him whether the FBI had ruled anyone out as a potential target of the investigation of allegations of collusion between the Trump campaign and the Russians. In response, Mr. Comey stated: “Well, I haven’t said anything publicly about who we’ve opened investigations on. I briefed the Chair and Ranking on who those people are.”

Mr. Comey was asked if the FBI is investigating the President. He refused to answer. Mr. Comey said he didn’t want people to over-interpret his refusal, but that he wasn’t going to comment on anyone in particular. He thought it would put him on a slippery slope of having to answer who else is or is not under investigation. That could reveal who is being investigated.

Mr. Comey did brief Ranking Member Feinstein and me on who the targets of the various investigations are. It would not be appropriate for me to reveal those details before the professionals conducting the investigations are ready. So, I will not answer any questions about who are targets of the ongoing Russia investigations. But I will say this: Shortly after Director Comey briefed us, I tweeted that he should be transparent. I said he should tell the public what he told Senator Feinstein and me about whether the FBI is or is not investigating the President.

On Tuesday, the President’s letter said that Director Comey told him he was not under investigation. Senator Feinstein and I heard nothing that contradicted the President’s statement. Now Mr. Comey is no longer the FBI director. But the FBI should still follow my advice. It should confirm to the public whether it is or is not investigating the President. Because it has failed to make this clear, speculation has run rampant.

The intelligence community said that one of the Russians’ goals is to undermine the American public’s faith in our democratic institutions. Wild speculation that the FBI is targeting the President in a criminal or intelligence inquiry is not just irresponsible and unfounded. It provides aid and comfort to the Russians and their goal of undermining faith in our democracy.

So, what I suggest is that before this Committee does anything more on this matter, that all the Members get briefed by the FBI on what is actually going on.

Hopefully, that will help temper some of the unsubstantiated statements that have been made.”
Source