Steps Begun to Prosecute George Soros for Treason, Sign on to Show Your Support! 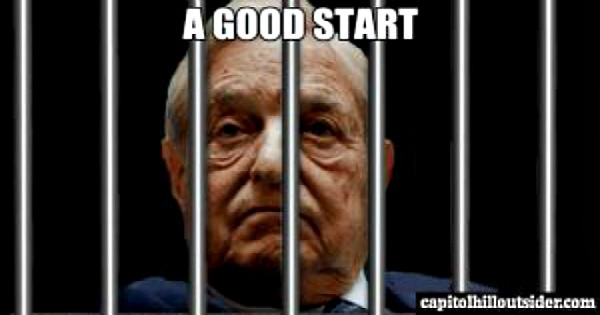 Action has now charged out the gate to take down the most evil man on earth, Communist Billionaire George Soros, a citizen of the U.S. (and Hungary) by prosecuting him for Treason and Sedition. Both are serious actions that can bring the death penalty.

Treason means to work with enemies to cause chaotic harm, destabilize and interfere with your own country with the goal of its destruction and seizure to replace it with another government. Sedition is inciting disorder in a country, which is similar, but with the same severe consequences.

Soros, who lives in New York, has over 200 ‘non-profit’ organizations created for that very reason, to destroy America and put this country under Communist dictatorship with Soros on the One World Government throne. These organizations, their names and purpose can be found on this writer’s website: www.revaustinmiles.com. Readers will be shocked.

In my story I suggested everyone contact their representatives and President Donald Trump himself to demand that these charges be made and Soros arrested.  Reader Richard Firth emailed that all demands should be sent directly to Attorney General Jeff Sessions since he is the one who has the authority to file the charges. He included this link to contact AG Sessions:
https://www.justice.gov/doj/webform/your-message-department-justice

Mr. Firth also alerted us to this link to a petition site to send a message to the Attorney General with the title: Petition to arrest George Soros for crimes against the U.S:
http://www.thepetitionsite.com/189/568/205/seize-assets-and-deport-george-soros/

Sign this petition without delay, then compose a letter to AG Jeff Sessions, similar to the one below just sent by Mr. Firth:

George Soros is a racist who exploits blacks by paying them to do his dirty work. Soros personally hates blacks which he considers an inferior race only to be used. For him, black folks are merely useful idiots to cause chaos and divide our country while weakening it, enabling him to carry out his agenda.

Racist George Soros, cares only to destroy all humanity by putting everyone on the planet under a new Communist One World Order dictatorship with him on the world throne as emperor of the planet. Virtually he is trying to overthrow the U. S. Government which is an act of treason

He stirs up hatred toward the blacks by paying them to cause riots and chaos, stopping traffic, destroying property and looting stores which results in blacks creating their own stereotypes under the banner, Black Lives Matter. Then they complain about being profiled, thanks to George Soros.

Soros is agitating blacks against whites with the goal to promote a huge race war that will divide and bring this nation to its knees where America, the last hold out against the New World Order, will be weakened sufficiently for Communist rule to be established.

Therefore please issue a warrant for Soro’s arrest charging him with high treason. This man is almost a form of the anti-Christ, trying to destroy nations with the goal of reducing the world’s population to about one million individuals through whatever means necessary.

He must be taken off the streets, put in utter isolation and tried for high treason.

It is suggested that copies of your letters to Mr. Sessions be sent to your representatives and to President Donald Trump. We must bombard our officials with this demand which should spur them to action. For sure this will get their attention as the people speak. For our own survival, this must be done. CHARGE!

This effort has officially begun with Mr. Firth’s letter to The Attorney General. Now it’s your turn.