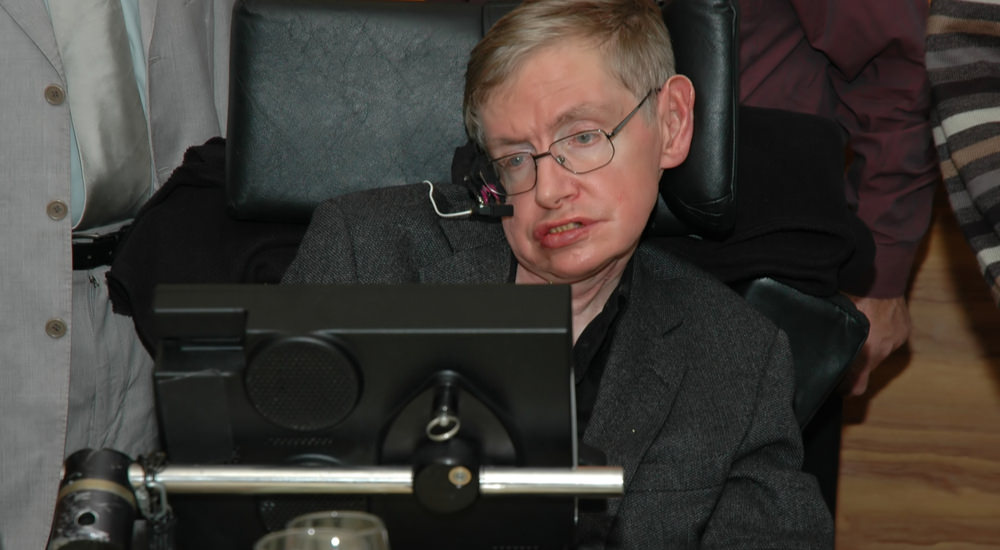 Cosmologist and theoretical physicist Stephen Hawking like Christopher Hitchens, and Richard Dawkins are, Darwinist, with a brand of prideful, over-confidant, and self-absorbed solipsism that drives their world view. By its nature it is a view that must depend on prior philosophic postulations.

With millions of missing links and absolutely nothing, but speculation about what may have taken place billions of years ago, they call for everything from nothing. But even the gases or materials that supposedly came together for the big bang have to go unmentioned because they too cannot be explained apart from a creator.

While Dawkins thinks it is only appropriate to scoff and laugh at Christians who believe in intelligent design. Contrarily, it is nearly impossible not to laugh at those whose best theories make them look like pack of high thinking ponderers who are piddling into the wind.

To suspend the missing links from question and the highly troubled carbon dating results, the second law of thermodynamics and the possibility of a worldwide flood, or the possibility of a creator takes much more than a mere theory, it requires monumental ignorance or intense indoctrination – or both.

It is Christian charity alone that keeps us from using words like dumb or stupid when it comes to Darwinist doctrine. Perhaps we should simply agree with the scripture which declare they have over active imaginations. To wit:

“For the invisible things of him from the creation of the world are clearly seen, being understood by the things that are made, even his eternal power and Godhead; so that they are without excuse: Because that, when they knew God, they glorified him not as God, neither were thankful; but became vain in their imaginations, and their foolish heart was darkened.” (Ro 1: 20-21)

Souls with darkened hearts look at the creation and see only a big bang out of which came millions of species and a world so delicately balanced that changing only one parameter could end it all.

Christians look at the creation and have only one response. They thank the Creator for his unfathomable wisdom.

Now, just who should be laughing at whom?

We may never be able to convince some, that the world is not run by a small coven of specially chosen insiders, illuminati or others who sit at the reigns of our destiny and lead the world down the path of their choosing. But the scriptures are not filled with warnings of unfettered conspiracies and secret organizations.

Rather, the Bible tells us that Satan walks millions by the hand to their own destruction by means of mere indoctrination, it is the path of least resistance, no thinking required. It is a religion with Dawkins, Hawking and a band of others at the helm as priests of the deadliest modern world view to ever touch down on our planet. It looks smart, but after all it is the religion of dummies who are intrigued by only their own pseudo intellectualism.

It is pop-deception on the move, ushering in the Day of Judgment.

When they are calling for the cover of the mountains and the rocks to hide them it is not to shadow their brilliance from the face of a returning Savior – it is to keep his glory from shining on them. Exposed and revealed the best of their intelligence will be seen as utter nonsense.

“And the kings of the earth, and the great men, and the rich men, and the chief captains, and the mighty men, and every bondman, and every free man, hid themselves in the dens and in the rocks of the mountains; And said to the mountains and rocks, Fall on us, and hide us from the face of him that sitteth on the throne, and from the wrath of the Lamb: For the great day of his wrath is come; and who shall be able to stand?” (Rev 6: 15-17)

The god of this world (2 Co 4: 4) doesn’t care how we get to destruction; he is only interested in the final outcome. We are no match for him. For children and the simple minded a frog kissed by a princess is enough to produce a prince. For the more sophisticated mind he provides a prince by means of a frog and billions of years of evolution – no princess needed.

It is not a contest of great thinkers v. the dumbed down religionists – it is dumb on dumb under the cursed weight of demonic delusions.

We have underestimated our enemy; there is none like him in all the earth. Kingdoms and powers are his to rule and he gives them to whomever he likes.

“And the devil, taking him up into an high mountain, showed unto him all the kingdoms of the world in a moment of time. And the devil said unto him, All this power will I give thee, and the glory of them: for that is delivered unto me; and to whomsoever I will I give it.” (Lk 4: 5-6)

The enemy does not need to offer so much to the rank and file, a little intellectual pride and some tenure goes a long way.

Hawking may be buried in London’s Westminster Abbey alongside Darwin and Sir Isaac Newton, but he will be raised to stand alongside the poorest and saddest of all men who decided to believe his godless surmising. We are bemoaning his lost soul and the souls of those he brought with him into eternal darkness.

We cannot salute his feigned intelligence or the product of his life. It is all too close to blasphemy.

In his entire life Hawking dealt largely only with theories, but with one exception. He proved beyond all doubt the saying of Christ the Savior on at least one very sad point, to wit:

“But woe unto you, scribes and Pharisees, hypocrites! for ye shut up the kingdom of heaven against men: for ye neither go in yourselves, neither suffer ye them that are entering to go in.” (Mt 23: 13)

Hawking’s life story is indeed one of the saddest stories ever told.