In Orlando This Week? Prepare to be Surrounded by 150K+ Celebrating Homosexuality 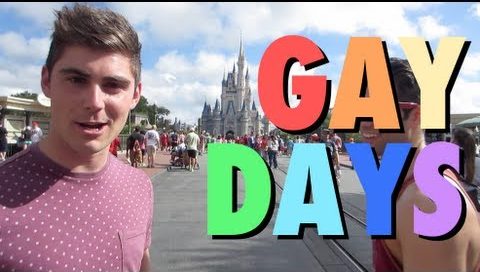 Stay Away from Orlando This Week Unless You Want to be Surrounded by 150,000 Homosexuals and Lesbians

The disgusting activities of “Gay Days” were started years ago by Disney. Since then the cancer has spread throughout Orlando, including almost all the other parks (with the notable exception of the Holy Land Experience). According to the Gay Days website 150,000 “LGBTQ” people will descend on Orlando, making the city more dangerous than Chicago for the week.

My family spent Memorial Day weekend in Orlando. While talking to some of the staff at our hotel we were reminded that this week was when the debauchery would occur. The restaurant manager of the hotel (a major resort hotel which I will not name in order to protect to protect the manager’s job) told me that it was “insanity, 24/7”. He told me about disgusting acts that took place in the public areas of the hotel, and that many of his staff refused to work that week.

We had our own experience with this anti-family debacle years ago. That was when Disney was lying about their involvement. They claimed they had nothing to do with organizing it,. However I spoke with a staff member who told me confidentially that Disney circulated a memo requiring a representative of every department to attend a “Planning session for Gay Days.” The supposedly family-friendly park participated in and encouraged the event because of the money they made. Today Disney admits this.

We saw men strolling down the streets of the Magic Kingdom dressed only in women’s lacy underwear. Of course the only photos their website show are fully clothed homosexuals wearing red shirts. (If you are foolish enough to go there this week, don’t wear a red shirt. You’re liable to be asked on a date!). We talked to families who were horrified by their children witnessing the obscene clothing and the spectacle of same-sex people “petting” in public. When they left the park, Disney refused to refund the admission. Many of these were families who had saved for a year to give their children a nice vacation.

IN an article about Gay Days, the Florida Family Association quoted a homosexual who warned families to stay away due to what he described as the “vulgarity on display” At Disney. The Association hires airplanes to fly over Orlando with banners warning that all the Disney parks will be full of LGBTQ.

Their spokesmen, David Caton, notes that when Christian Concerts at held at Disney, it closes the park early and requires concert-goes to pay for a second ticket to attend the evening events. Apparently finds Christianity offensive and doesn’t want to expose its clientele to happy people who love the Lord.

But since Disney does not require “Gay Days” to be held after hours, Caton concludes that the park wants the events to “impact the social arena,” noting that Disney has stated its goal is to influence children via its theme park.

Walt Disney would be horrified if he could see what has become of the family-family-friendly empire he created. A culture of perversion has taken over Disney. Certain departments, such as the important Imagineering division, are run by gays. They have worked themselves into positions where they control hiring – and they only hire their own kind.

Disney’s movies have also become a source of indoctrination of children. They are full of subliminal sexual imagery ans references. Their recent hit “Frozen” is just the latest in a long series of such movies. People argue that the children don’t understand some of the messages, but child psychologists tell us that they do have long-term impact on the kids.

It is terribly sad for someone like me who grew up with a Disney that used to be “The Happiest Place on Earth” see it  become “The Most Perverted Place on Earth.