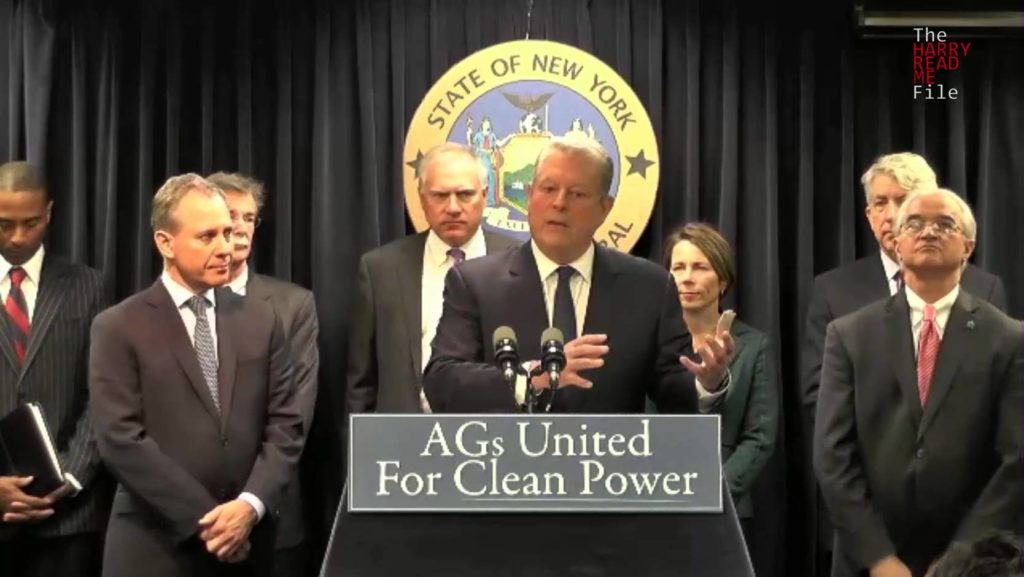 In January of this year a meeting was held in secret, “hosted by the Rockefeller Brothers Foundation (RBF). The stated purpose was ‘to establish in public’s mind that Exxon is a corrupt institution that has pushed humanity (and all creation) toward climate chaos and grave harm.”

This strategy session led Al Gore and 17 state attorneys general (and the Virgin Islands) to file criminal charges against the evil worldwide polluter and destroyer of our precious planet – which as we know, or have been repeatedly told since the 1980s, is on the precipice of destruction. I wrote about its genesis here.

The legal effort to stop Exxon Mobil (EM) from further reeking havoc on our planet is spearheaded by the New York State Attorney General Eric Schneiderman. He filed RICO (racketeering) charges against EM and has demanded that they turn over all documents pertaining to its correspondence with any polluting sympathizers.

One of these sympathizers was the conservative Washington think tank, the Competitive Enterprise Institute (CEI). But being that the CEI doesn’t have billions of dollars to extort, the charges were quickly dropped against them.

Others of the 17 state attorneys general (and the Virgin Islands) followed New York’s lead and also filed RICO charges against EM.

So what is this really all about? Do these AG’s really want to shutter Exxon Mobil? I know they are liberals and as such rarely think things through to their consequential ends, but can they possibly believe they could ever put EM out of business?

No – of course not. As Kimberly Strassel wrote a few weeks ago, “the first thing to know about the crusade against Exxon by state attorneys general is that it isn’t about the law. The second thing to know is that it isn’t even about Exxon. What these liberal prosecutors really want to shut down is a universe of their most hated ideological opponents.”

For decades liberals ruled virtually unopposed. They ruled government, the airwaves and print media. Their influence became so great they were even able to cause the United States to lose the Vietnam War.

Years went by with the left, as Rush puts it, “never having to compete in the arena of ideas.” Then along came conservative Talk Radio, Fox News and then the Internet. Right-leaning websites and broadcasts began to challenge the left’s age-old propaganda and blow holes in all its ridiculous assertions.

But instead of a straight up fight against the right, they are resorting to the only defense they know – strike out against conservative private sector upstarts using the virtually limitless power (and funding) of government to squash free speech and dissenting views.

This is what these radical leftist attorneys general really hope to accomplish. And maybe along the way, pressure Exxon Mobil into paying for this all to go away, at least temporarily – giving these states a multi-billion dollar slush fund to play with.

For progressives, it’s also all about the framework – one overreaching regulation and law built upon another. Win one case against the private sector thereby setting the precedent for any cases that follow.

Part of the suit is for Exxon Mobil to produce all correspondence they had with any right-leaning organizations – which will then give the AG’s a foothold into pursuing and shutting down these sympathizers en masse or individually.

The liberal elites long for the good old days of information bottlenecks and filters. The days where if one watched the news, they were forced to view one of the three cookie-cutter leftist networks or read one of their liberal rags. Either way, only one viewpoint was present.

But sadly for them those days are long gone and aren’t coming back. Even they understand this. So instead of competing with the right, they will use the power of government to shut us up using any means necessary – even racketeering charges, reserved for the mob.

They must believe that this strategy has a good shot at doing so, or at least further building the framework of liberal state control and dominance of information. And if it doesn’t – it’s not as if they wasted millions of their own dollars.