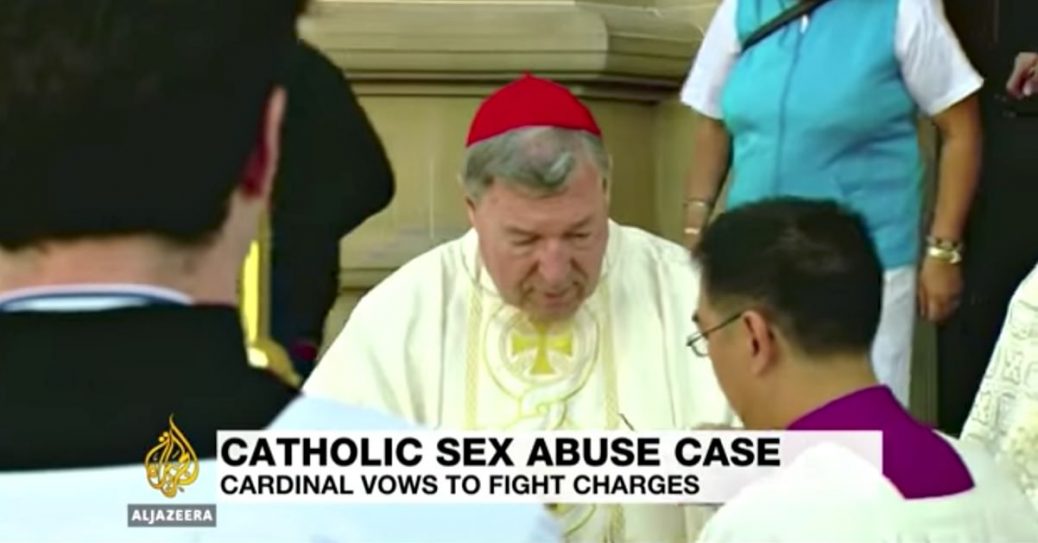 Of course, Infowars! And who do you think is doing the exposing of these rogue anti-Masonic clergy and politicians? It is these behind-the-scenes sources where the real infowars should be concerned! And not just the superficial story which is gleefully shared by main stream media!

SEE “IN GOD’S NAME” by DAVID YALLOP revealing how this Treasury position is controlled by Judeo-Masonic bankers for decades. Obviously, this cardinal got out of line so the controllers are exposing the 32nd Masonic Secret of pedophilia for members, the 32nd Degree Secret they were hitherto able to obviously control Pell with. It’s nothing for this banking elite to pay for “multiple allegations.” Infowars desperately needs to go below the surface.

Infowars! No need to print only allegations. Should we print all allegations against Alex Jones? Ridiculous! “Multiple allegations” means absolutely nothing. Every day Trump has Multiple allegations against him. Meaningless. Let’s not be gossips and slanderers. Alex again acting like an old lady in this respect. The world has more than enough problems without prioritizing allegations. Infowars, give your article some meat! If this Cardinal is an infiltrative Freemason – who believes and acts out the 32nd Degree Freemason secret of pedophilia – then this IS Big News! But let’s keep the perspective….

Lots of people are arrested on allegations. Every day, leftist social workers arrest children from homes based simply on unfounded tips. While this may or may not be true with this Cardinal, he has yet to have a trial by jury. Allegation articles, in this day, are for the most part a waste of time and can be highly offensive. 1/2 step above Fake News. The upper third of the Infowars article clearly needs to state the Communist and Masonic infiltration and control over clergy destroying the Catholic Church from within…

The U.S. on April 20, 2017, prepared to arrest Wikileaks founder Julian Assange, preparing charges based on “multiple allegations.”  Did Infowars give the same “multiple allegation” treatment to Assange?  No!  But in both case, the Masonic control over political and clerical real and alleged pedophiles is disregarded.  With this in mind, can one honestly call the Infowars reporters “investigative journalists?”  Not in the sense David Yallop is a true investigative journalist.

Since 1738, every papacy until 1968 condemned Freemasonry. By the 1830s, the papacy recognized the Vatican was already being infitrated by Masons. In 1967, the Masonic Parisian Lodge, also known as the Jewish Lodge, congratulated Cardinal Villot on legally subjugating the traditional papal role on rulings of faith and doctrine, to implemeting Masonic policies. In 1968, Malachi Martin wrote in his The Encounter that Freemasons were now openly in the Vatican…

“SATAN” MEANS “SLANDER” and these allegations strongly tend to slander the entire Catholic pop. of 1.25 billion – when it may or may not be true of this Cardinal, whose position has been controlled by Judeo-Masonic bankers for decades.  These are a waste of time for Infowars and needlessly bring themselves to the attention of Catholic Action and the intensively-activist Catholic League – not to mention an exodus of otherwise loyal Catholic subscribers….