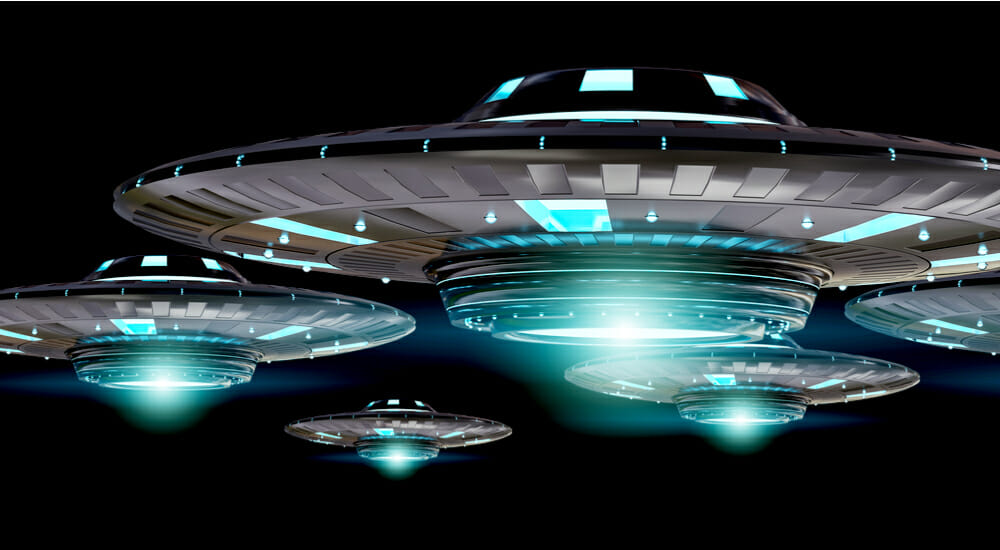 Squadrons of UFOs? Of course, we know all about it from the Star Wars fantasy. But in real life? In our day? Intriguingly, YouTube has several entries for “Squadrons of UFOs.” But the cutting-edge Sky Watcher News Channel on YouTube seems to have outdone itself!

Shades of Darth Vader. More and more, the demarcation line between fantasy and reality is blurred. What is real? What is fantasy? Have we all along been conditioned by those cathedrals of fantasy, the shopping malls, into perceiving reality as fantasy? And fantasy as reality?

There appears to be surfacing a deeper, darker, more mysterious level to social engineering than, say, the mere manipulative whims of social engineers at Tavistock. As one easily concludes from the just-filmed video at Sky Watcher News – Click Here – something very real and akin to Darth Vader does exist!

Scripture admonishes, “To you who…have not learned Satan’s so-called deep secrets…” (Rev. 12:7-9) adds “I will grant wonders in the sky above….” (Acts 2:19).  With 21st-century technology, one can only wonder at Satan’s so-called secrets above, revealed by the dark side to pre-Islamic Turks!

Truth is stranger than fiction. The legendary author Robert Louis Stevenson confided in his travel diary, “We are living in a far more mysterious world than we think.” Vigileaks agrees! Sky Watcher News is rendering a great service to the world… for anyone who will watch and listen.

And here’s the irony: While the New World Order is doing a level of social engineering, with its agenda timing of the alleged “UFO Disclosure” – in cooperation with CGI-like UFOs manufactured on earth – the irony is that there is very REAL UFO activity going on, as seen in this latest video, Squadrons of UFOs!

Understand! NWO over saturation of today’s inescapable UFO craze is ultimately designed for a management-by-crisis scenario to manipulate the world population through fear, eventually giving in and “seeing the need” that only a central world government can effectively deal with these borderless threats. Soon, false flag but very convincing UFO threats will occur to bring this about…

But here’s another irony: All along, Christians with a Biblical base, believed the Star Wars Trilogy was drawing us further and further into non-Christian fantasy. Into a pantheistic belief system which is of the world and anti-Christian.

That is, the “May the force be with you” is a major pantheistic message. In a nutshell, pantheism believes “God” is merely a force – and is in everything, from you to trees to rocks. Pantheism is the world’s oldest pagan belief system. Star Wars resurrected it in 20th century pop culture. But Christians have always believed God is not a force but a deeply personal Being, whose prophecies are geared for your salvation.

But Vigileaks believes, as do increasing numbers, that UFOs are from several sources good, bad, and indifferent. It is outside the scope of this article to elaborate on these categories.

The bottom line is, what we thought was once fantasy, is gravitating into reality! Not just from UFOs manufactured on earth, but with additional forces (who inspired the earth UFO designs) to manipulate us into a one-world government. Understand: There WILL be a war in Heaven, in the second Heaven outside our atmosphere! And it is amazing how our spiritual warfare on earth will influence what happens above us. “May Prayer be with you!”

Why did the government buy 13 million monkeypox vaccines from a biotech company backed by Fauci?
May 25th, 2022 DC Clothesline