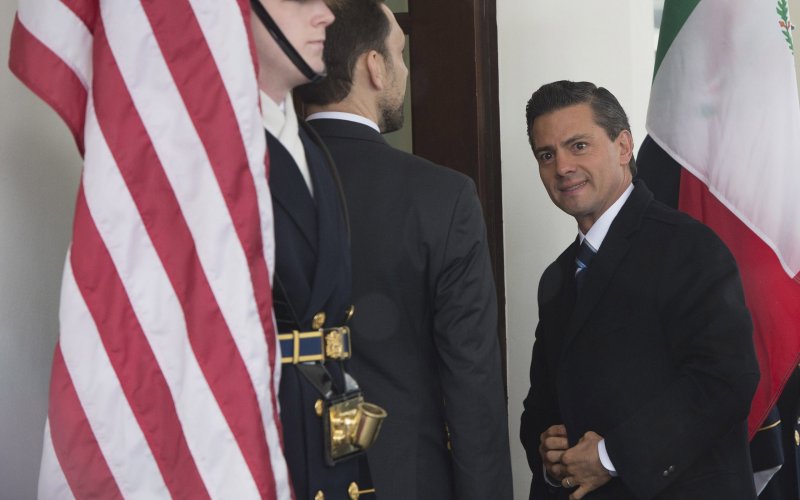 As reported in the Wall Street Journal, wealthy Mexicans are willing to put up multiple millions of dollars to assist Mexican nationals illegally in our country as they fight to remain in the U.S. The Mexican government has also allocated $50 million to its consulates to help the movement. I guess neither the wealthy nor the corrupt government of Mexico really want the low skilled, uneducated (even after attending public institutions in the U.S.) law breakers returning to their home country.

The offered money is to tie up the U.S. courts, exhaust resources and frustrate government lawyers. Protesters will undoubtedly take over the grounds outside federal courthouses. An opportunity for drones equipped with facial recognition cameras overhead? Perhaps an apprehension or two, immediate escort to a courtroom and a speedy trial? With courts backlogged already, the proposed foreign money will prolong the stay for the possibly tens of thousands of potential deportees. Cloward and Piven would be very proud of the way foreign nationals extrapolated on the lessons the pair taught budding socialists back in the 1960s.

However, this battle is easily fought and won: (a) President Trump appoints immigration judges to the courts who are willing to uphold current immigration laws. (b) ICE has buses lined up and idling outside the backdoor of immigration courts. (c) Judge asks plaintiff if they were born in the U.S. If answer is no, then he or she asks, “Do you have a valid passport, green card, entry visa or other government issued authorization to be in the country”? If the answer again is no, a bailiff escorts the defendant to the awaiting transport. NEXT!

The above suggestion allows for clearing each case in three to five minutes. That’s 12 to 20 per hour per courtroom or plus or minus 150 of the criminal trespassers per day per courtroom. Can you imagine the Mexican economy with so many returnees?

It only took minutes to cross the border without permission, it should only take minutes to reverse the process and correct the problem. Family matters should not be considered by the courts. They are the responsibility of the lawbreakers who created the situations. The responsibility is upon the adults who should have made arrangements beforehand, not the citizens of the U.S. Yeah, responsibility. What an unconventional thought!

Harsh? You bet! We have millions of people on the welfare and unemployment rolls who should be “encouraged” to pick apples or lettuce or make up hotel beds or pluck chickens, etc. in return for their government handout. Perhaps picking up trash alongside the roadways or after a Democrat rally might be in order. Without people here illegally taking those positions, there might be more interest by otherwise lazy Americans to do the work. No work, no sharing the taxpayer’s money. Let’s call it redistributing the work.

We, as a country, have been remiss with our border security since before Reagan signed the Immigration Reform and Control Act of 1986. That act legalized some three million lawbreakers in exchange for the promise of enforced immigration control that never came. Today, the seditious lot describing themselves as progressives, Democrats and occasionally as “independents” are again demanding the same tit-for-no-tat that occurred thirty years ago. They use the same mantra, “the people only want to better their lives, and America offers that opportunity”. They neglect to account for the people entering who want to destroy our systems and values and kill as many of us as possible. Certainly those who break a second law need not be taking up the courts’ time or the taxpayer provided interpreters’ time or that of the free legal aid lawyers.

This isn’t tag or a flag football game, folks. It’s for keeps and the players on both sides get hurt. At best we need not be importing criminals, potential criminals or terrorists.  Protecting our country against illegal aliens is only part of what is necessary. Protecting our sovereignty by defining and defending borders is a requirement for any sovereign nation.

PM Trudeau is affably willing to aggregate people with unverifiable histories from war-torn nations without viable governments.  Perhaps we should allocate more resources to the northern border as well.  Immigration reform must be comprehensive.

When deportees are found in the U.S. a second time without authorization as six month stay at Sheriff Joe’s pink panty tent city might be in order.  No trial at the end of the sentence, just immediate expulsion.