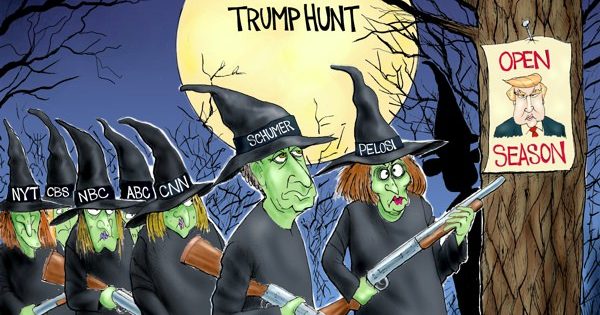 4th Amendment – The right of the people to be secure in their persons, houses, papers, and effects, against unreasonable searches and seizures, shall not be violated, and no Warrants shall issue, but upon probable cause, supported by Oath or affirmation, and particularly describing the place to be searched, and the persons or things to be seized.

Leftists may claim they have every right to give President Trump an anal cavity search, but that lie is premised on their baseless accusation of Russian election tampering and collusion which is devoid of evidence or facts.  If the government had the right to dig into the finances of anyone at any time then no Democrat drug lord or mobster boss would be safe.  Most especially, Obama, who weaponized the government against the people of the United States by using the IRS to persecute conservative groups, and initiating an illegal investigation of the Trump campaign through the intelligence agencies, would already be up on trial for all the treasons he committed in the name of foreign agencies while president.

If there is going to be this effort to dig up any possible dirt on Trump for daring to intrude on the Washington Establishment trying to bring them to heal, then the people need to demand an investigation of every last Washington politician!  Members of both parties, especially Democrats, become filthy reach while serving in government, and as Harry Truman admitted;

“You don’t get rich in politics unless you’re a crook.”

An investigative anal probe needs to be made of the Clintons and Obamas, of Reid and Pelosi and Schumer and Warren and Sanders who all got rich only by virtue of being in office.  These people all got ultra-wealthy by their political offices rather than producing anything of value of President Trump has spent his life doing.  Government corruption, graft, and crony capitalism are the qualities that leftists say they want to root out of Washington, but when it comes down to it, these are the qualities they endorse in their candidates and use to smear the opposition.  This is nothing more than leftist psychological projection seeing themselves in their opponents.  There are only two ways to make money – do what is right and trade, or do what is left and steal.

This endeavor by Special Prosecutor Mueller and Deputy AG Rosenberg, both Obama Deep State operatives, is nothing more than the witch hunt Trump says it is.  Government is not permitted to dig into citizen’s past to find something that they can call a crime, nor are they permitted to expose personal information with the sole purpose of damaging a person’s reputation.  But that is what Democrats are engaging in doing.  This is McCathyism turned against patriotic citizens, but carried out Nazi style in which the targets are guilty until evidence can be found to convict them of something else.