The Solution to our Middle East Woes 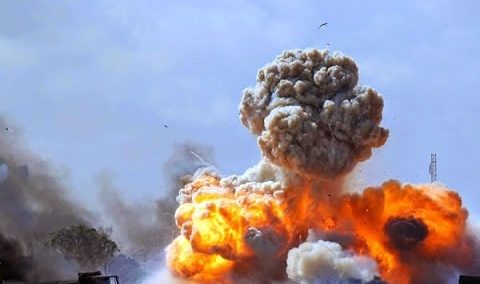 Long before the inception of Israel there was unrest in the Middle East.  Centuries ago there was the Crusades.  And the commonality of unrest to the region is the dominant mindset that dwells not on achievement and progress, but the destruction of others.  Most of this can be traced to the fundamental tenets of religious doctrines that classifies the chosen and the condemned.  This primitive approach to human survival has been perpetuated for eons by a cry for faith that all will be right if only a batch of contradictory and illogical beliefs will be chanted, revered and followed.  Well nothing is right nor promises to be under this approach but blind obedience continues to be the norm and a reasonable review of results and future improvements is not openly considered.  What then should the West do to live in a world where this vehement hatred of life and humanity continues to fester and erupt?

What would an individual do if he was faced with dealing with another individual that lied, attacked without provocation, threatened annihilation, and continued to build weapons for destruction of all who did not agree with their tenets?  A rational individual would not associate with such a person nor would he try to bribe him into changing his behavior, appease him with free donations because he felt sorry for his family and in essence avoid having anything to do with such a person.  But rationality is not a part of the current American politician’s creed.  There is the false premise that “we will look bad’ if we don’t get involved with trying to solve international issues by the wastrel practices of foreign aid, the bribery of diplomacy and the timidity of limited warfare.  We are looking bad in the eyes of our enemies.  They look at us as patsies too dumb to realize we are helping them to continue their ongoing warfare and hate.  But the politicians of America only want to be sure we are not seen as ungenerous or unwilling to help the “innocent”  that the thugs, Mullahs and killers have brainwashed into believing there is only the world of war and a mythical afterlife will be their reward.

Taking a lead from the rational individual, it is time to isolate the Middle East from the West.  it is time to cut off the foreign aid that is obviously being turned into weaponry, pull out of that do-nothing U.N and draft a foreign policy based solely on living in a civilized world.  If a country harbors terrorists it is not in our interest to worry about their civilians.  Those who would initiate a rebellion against tyranny should be supported but those who passively accept their condition and have not given any indication they are willing to fight for liberty must be ignored until they arise to fight for a proper human status.  This was assumed would be the case before the Iraq invasion and you can see clearly the results.  The French helped us in our revolution but only after we had shown that not only were we dedicated but that victory was possible.  If we had shown the French we were incapable of governing ourselves do you think France would have joined in the war against the British?  Evidently those were more rational political times.  Evidently there were politicians who thought first of their citizens welfare instead of bleeding them with ever increasing taxes and sending the loot to foreign countries to build and acquire weapons.  What good is a  government representative who represents others instead of the people who elected him and pay his salary?

Recently at a town meeting our Senator Grassley was asked if there was any consideration given in Congress of initiating a withdrawal from the U.N.  His answer was a curt, “ NO”.  This is the unconscionable response.  After watching this ineffectual body of dolts fail to act as terrorist regimes build and acquire weaponry, see the graft of the “oil for food” fiasco, observe China and Russia stonewall resolutions designed to impose sanctions and decisive retaliatory efforts there is no excuse for the Congress not to be taking a hard look at the benefits and costs of this dinosaur.  They get real concerned when a citizen acts inappropriately, but evidently they think it is all right for any renegade nation to get a pass and support with our tax dollars .  This insensitive remark by Senator Grassley has lost him one vote for sure and I hope many more.  If a person who has been in the Senate as long as he has cannot see the corruption of the U.N is not in our interest it is obviously time to leave.  We need people in Congress that can see where America’s interests lie.  This includes refusing to sanction and support an organization that perpetuates frustration, an endless Middle East conflict and holds no promise of improvement.

I urge everyone to reexamine their representative’s stance on the U.N and foreign aid.  Only when they feel the heat of political rejection will they adapt policies that support the American citizen’s interest.  Since this must be first and foremost in their minds the litmus test is their stance on foreign policy.  And the most obvious element in this regard is the ongoing Middle East conflict.  The Democrats have called for a withdrawal of our troops.  What we should be withdrawing is also our money, our technology and our good will that has done nothing to gain us any respect.  Let the Middle East try to progress without us.  Let them find ways to acquire rockets from a barbarian economy.  It will be a return to the stone age and they can hurl their rocks , denounce America and live in the squalor their Mullahs insist upon.  But there will be no shipments of aid to be spit upon, no graft , no “donations”.  This will solve their ongoing concern with the West.  They will have only themselves to denounce and destroy.  And Israel can come to its senses and realize that there is no amount of appeasement  that will satisfy these butchers. The solution is in the minds and hands of those who have stopped thinking and seek alms.  This is not something we should continue to enable.