A Solution to our Homeless Veterans Crisis! 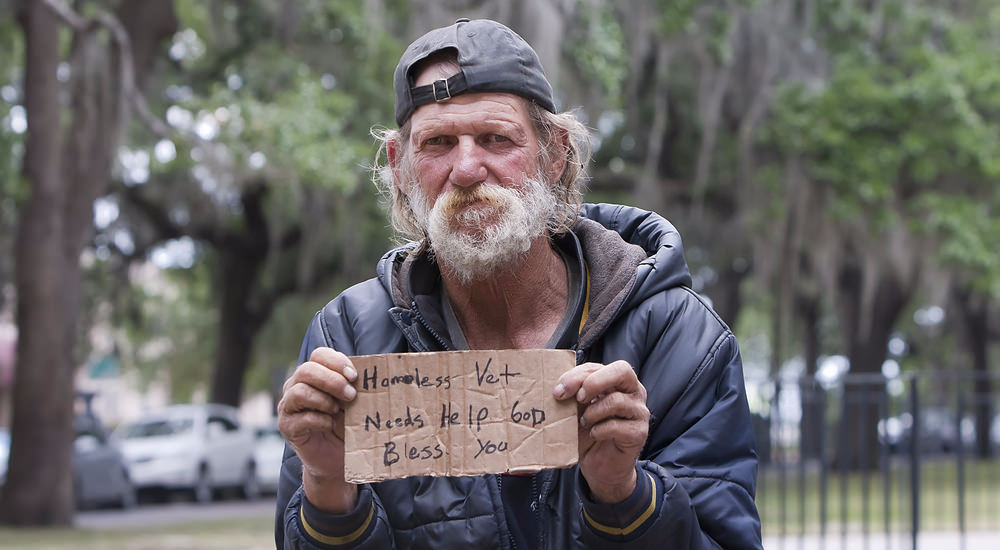 WASHINGTON 6/20/16—There is plenty of federally funded money to get all homeless veterans off the streets at this very moment. Here is only one area where money can be found in the coffers of the U.S. Government. There are many more.

This is what they are spending now, with OUR (taxpayers) money:  $13 million for ‘exploring musical preferences of monkeys!’Another $1.1 million ‘judging whether cheerleaders are more attractive as a squad than individually.’  This expenditure, of course, is very much needed: $5 million to learn whether drunken birds slur when they sing. That, of course is of utmost importance to our survival as a nation. And another $390,000 to determine how many shakes a wet dog needs to feel dry

Plus seven BILLION in aid to countries that hate us, while we have homeless people on the streets that have NO aid. Meanwhile, WHAT ABOUT HOMELESS VETERANS WHO NEED HOUSING?

WHAT ABOUT AMERICAN FAMILIES WITH CHILDREN who do not have food money? Yes we have way too many hungry AMERICAN CITIZENS. How about smart young people who want to go to college and university who have no funds to do so.

These are genuine Americans who need assistance in order to become academically able to have professional careers that will benefit us all. At least they should be able to provide interest free loans to those who are both qualified and able to benefit from a college/university education.

Obama is not insane. He knows exactly what he is doing in purposely giving money to strengthen those countries who are dedicated to wiping us off the map and putting what is left of America under Communist and Islamic rule.

And yet, the cowardly Republicans allow him to stay in the Oval Office when they could easily have the Sergeant at Arms escort him out of that office and charge him with TREASON. Yet, they do nothing.

While John F. Kennedy put a man on the moon, Obama has put a man in a woman’s bathroom. He has intentionally worked to blur the distinction of the sexes. Yesterday, Portland Judge Amy Holmes Hehn ruled that no longer will birth certificates list the gender of the baby…since that is hatred doncha know, They are now to be considered of ‘binary sex,” which the gays say, documents who they are. How’s that again??

National Radio Host Bob Boyd, of Issues in Education, pointed out that right after the Orlando Shootings, Obama tried to make it clear that the shooter does NOT represent all Muslims. If that’s the case, then why does that shooter represent all gun owners?  Good point to ponder.

Mr. Boyd also reasoned that if it is now the law that EVERYONE MUST perform ‘gay marriages,’ then when will they begin having those ‘weddings’ performed in a Mosque?  Great question.

In San Jose, a men’s restroom in Columbus Park is THE hook-up place for sodomites. Not necessarily with other deviants, but coming on to anyone who enters.  Still cannot understand how they are so sexually turned on by stinky public toilets. And they say, “we’re just like you.”  Really!

These goings on stimulated complaints since the park definitely is now not a safe place for children, or even adults. So the police dept. set up a sting operation using decoys. Arrests were made.

This, of course, is profiling and “selective enforcement.”  We can’t have that y’know! Forget having cops patrol the streets. Instead, let’s have men in white coats. That would make more sense.

And finally, all are familiar with the Stanford University star swimmer, Brock Turner, who raped an incapacitated young woman. The Obama Administration Judge, Aaron Persky, simply slapped the rapist on the wrists and sentenced him to six months in county jail, which will only be three months.

The left-wing newspapers soften their accounts (after all, the defendant IS a Stanford swimming star) to say that he “sexually assaulted,” the young woman while she was incapacitated. JOURNALISTS-let’s tell it accurately.  While the young woman was incapacitated, Brock Turner RAPED her.  Meanwhile, the victim is now at fault since she was intoxicated.  AGAIN NEWS WRITERS: SHE WAS RAPED, NOT SEXUALLY ASSAULTED! Get it right for corn’s sake!

Oh yes, Judge Aaron Persky stated that a reason for the light (no) sentence for the serious crime of rape was due to the fact that he had no previous criminal record.  This would mean that anyone who has not had a criminal conviction is allowed to rape a girl once, meaning that all law abiding citizens have a rape coming. Are you kidding?  This is absurd!

Then today, someone came to kill Donald Trump at a rally, a kid with a gun. Trump is a serious threat to both Democrats and Republicans who are firmly settled in the status quo. Trump will turn all that around and that they do not want. If the Republican Party sabotages his nomination, Trump still has more than enough votes to put him in office. And these voters are American citizens who have had enough of government deception. They far outweigh those giving out false news stories that he cannot rally enough votes for that office.  Oh yes he can. He has already accomplished that.